Violent, nasty blaxploitation/prison epic starring big, bad Jim Brown. Warner Bros.' Archive Collection, the M.O.D. (manufactured on demand) service that gives movie lovers access to hard-to-find library and cult titles, has released The Slams, the 1973 M-G-M actioner starring Jim Brown, gorgeous Judy Pace, Frank DeKova, and Ted Cassidy. Not referenced as often as Brown's more recognizable exploitation numbers from this period of his career, The Slams is crude and exciting filmmaking from scripter Richard DeLong Adams and director Jonathan Kaplan; it's a winner for anyone into this genre and time period. An original trailer is included in this good-looking transfer. 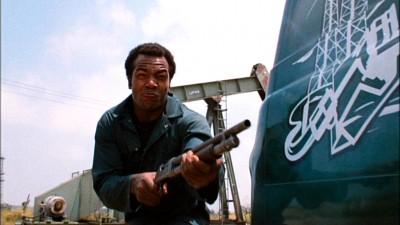 Curtis Hook (Jim Brown) is one bad-assed dude―just ask his mama (Betty Cole), who's given up on trying to see him right. With the aid of two goombahs, Hook hijacks a phony Syndicate oil tanker...where inside the mob exchanges smack for cash. Gassing the henchmen inside, Hook takes the dough, but not the dope (initially), which triggers an attempted double-cross from his partners―a double-cross Hook triples by wasting both of them with a cleverly hidden shotgun. Injured and on the run, he stashes the $1.5 million in a briefcase on top of a rotting ticket booth at an abandoned amusement park pier, and dumps the scag into the ocean. Smashing his van as he attempts to escape, Hook is sent down to the slams where everyone knows what he did, and where everyone wants a piece of that money. Caught in the middle between the warring black and white gangs in the prison, lead respectively by Macey (Frenchia Guizon) and Glover (Ted Cassidy), both of whom uneasily operate under the watchful eye of mobster Capiello (Frank DeKova), Hook also has to deal with the personal ambitions of corrupt prison guard Captain Stambell (Roland Bob Harris), who nominally works for Capiello. Will Hook be able to escape the slams to join his fine girlfriend Iris (Judy Pace) and score all that money? 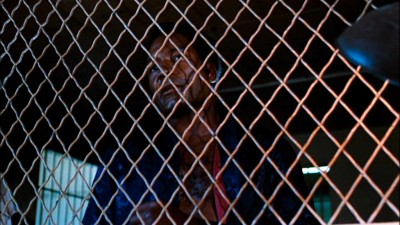 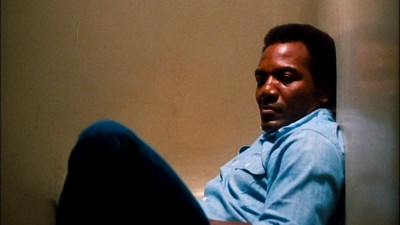 Made back during the Aubrey reign (or destruction?) of Metro, when cheap exploitation numbers like Shaft were acing out pricey projects from the likes of Zinnemann and Lean, The Slams isn't as well known as some of Jim Brown's more iconic blaxploitation efforts (Slaughter, Black Gunn), in part because of infrequent TV airings and no previous VHS release that I can find. Appearing in a project like 1973's The Slams at this point in his career, it was increasingly clear that Brown, once a fairly high-profile supporting player/B-lead in big-to-medium-sized studio productions (Rio Conchos, Ice Station Zebra, Dark of the Sun, The Dirty Dozen, 100 Rifles, ...tick... tick... tick...), was sliding down a slippery slope of narrower, less prestigious fare (Slaughter's Big Rip-Off, I Escaped From Devil's Island, Take a Hard Ride). Just the fact that he was repeating himself and performing in another cheapie prison picture only four years after 1969's Riot was probably a good indication that his once-promising starring career was sputtering out. 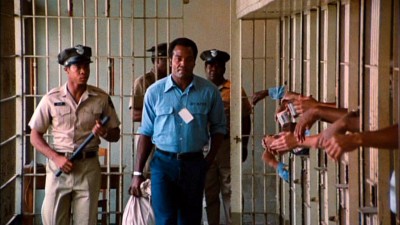 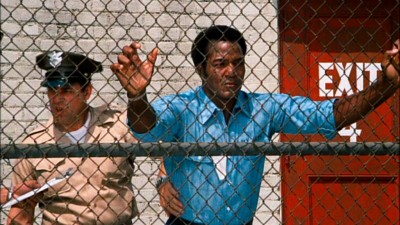 Taken out of that context, though, The Slams is miles above the tentative, frankly looney Riot (you can read my review of that movie here). A Gene Corman production (so you know all its exploitation conventions are neatly lined up on a row), with a screenplay by Richard DeLong Adams (the lyrical Sean Connery epic, The Red Tent, the excellent TV movie, Family of Spies), and directed by Jonathan Kaplan, on an exploitation roll after the smash hit, The Student Nurses (and soon to go on to even bigger success at the drive-ins and later hardtops with diverse efforts like Truck Turner, White Line Fever, Over the Edge, Heart Like a Wheel, The Accused, and Unlawful Entry), The Slams opens with a bang and never lets up with its crude, familiar, but undeniably energetic storyline. The credit sequence, looking to our eyes now like one of those Beastie Boys parody videos (this is just the kind of stuff Tarantino obsessed over...and copied), with the mob henchmen in their ridiculously florid hairdos and clothes getting wasted to the fat, chunky funk line from Broadway composer Luther Henderson, immediately lets you know this is 70sdrive-in/grindhouse/second-run territory...and we love it. No screwing around with any backstory or prep scenes for Brown's heist: just get to the base action and start seeing some racist honkies getting splattered by ice-cold, stone-faced Jim Brown. The quicker Brown gets to prison, the quicker the story's dramatic conflict can begin, so this fast, brutal opening (Brown gasses five men with cyanide) indicates that Kaplan and company know exactly what they're doing here. 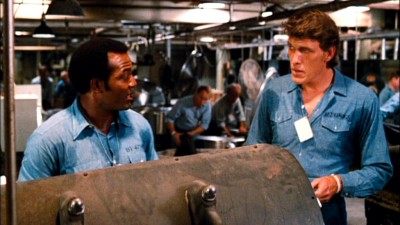 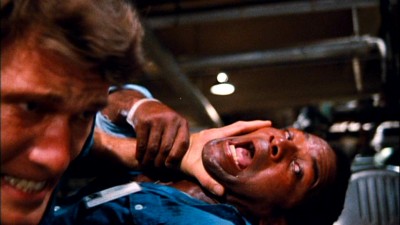 Once inside the slams, The Slams becomes quite interesting outside of its exciting exploitation elements. Not unlike other prison pictures, Brown's Hook character is shown to be an independent, someone who futilely hopes to ride out his sentence without taking sides or ruffling feathers, looking for the day when he's out and reunited with his girl and stolen cash. Of course, the conventions of the genre demand he immediately piss off someone powerful (in this case, virtually everyone inside), but here in The Slams, an added, intriguing subtext comes from the movie's attitude towards race. The Slams is, after all, an effort that can fall into the blaxploitation subgenre, and Hook does make comments that indicate he's at least aware of and sympathetic to the societal concerns of the black community as he sees them (after the initial heist, Hook yells at his partners: "I told you no fucking with dope! It's gonna burn your muthafucking ass! That shit is bad for the brothers!"). However, once inside, the resourceful, intelligent, savvy, tough-as-nails Hook doesn't follow the sometimes facile racial stereotyping of the subgenre and become a leader or follower of the large black gang, vanquishing the racist whites with his superior skills. 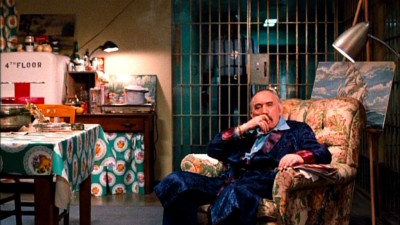 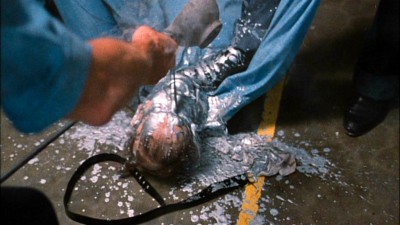 Instead, he wants no part of either racial side. Even though he's warned that "nobody can handle it alone in the slams, baby," Hook rejects entreaties/threats from his new black cellmates, including head cheese Macey, as well as "sensible talk" from Italian capo Capiello (he also rejects cooperating with the white warden and Feds who want the dough in exchange for his freedom). Cassidy's white racist Glover is set up initially as the film's lead baddie, but Hook dismisses his racial insults and him almost immediately, trying to explain to him how he's being used by "the Man" just as the blacks are in the slams ("You're not too fucking bright. You [Glover and Macey] go around fucking each other, playing honky and playing nigger. For what? It's less trouble for the Man."). Indeed, The Slams' chief antagonist turns out to be not white but black: the slimy Captain Stambell, who thinks he's brighter than he is, and who sets the movie's final violence in motion by trying to score his own outside deal with Hook's money, going so far as to attack Iris at her apartment. Hook makes negative racial comments (and sexual, too, towards the movie's homosexuals) against whites and blacks, but he's shown to be more principled than anyone else in the movie, regardless of their color (when a white kid is freaking out in his cell on a drug overdose, Hook is visibly upset, imploring the couldn't-care-less guard to do something about it). If at the end of the movie, SPOILER Hook ironically "agrees" with the French woman about America being the land of opportunity for whites ("You let them keep thinking that, darling, 'cause while they're making it, we will be taking it,"), it's clear by his pragmatism and "looking out for number one" attitude that he'd feel the same way if blacks were in charge. 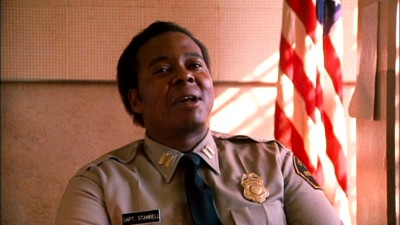 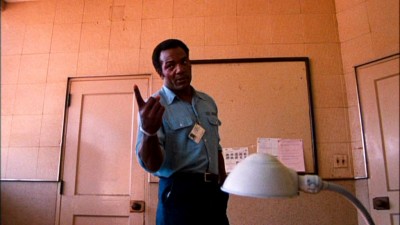 Sociology and politics aside, The Slams delivers the prison exploitation goods, beginning with the socko opening (complete with Peckinpah-styled multiple slo-mo angels of his van turning over and blowing up), segueing into the gritty procedural scenes of Brown being booked into the prison system, and all the expected mayhem once behind bars. SPOILER The scene where Cassidy punishes a white collaborator ("Okay, nigger-lover, we're gonna give you the beauty treatment") by pouring molten lead on his face is a genuinely cringe-worthy shocker (until you realize it wouldn't work that way in real life...including Cassidy holding the dipper with his bare hands and the thugs who get it splashed all over their shoes), while all the various beatings and stabbings are handled with a tough, no-nonsense vigor by Kaplan (SPOILER it's a good twist to see the "untouchable" Frank "Chief Wild Eagle" DeKova get his ass beat by Macey, another unexpected turn on the genre's conventions). Once Kaplan gets down to the final escape, SPOILER, it's handled with a surprising amount of solid suspense, with the added gruesome pay-off of Stambell's grisly demise, via cement mixer. 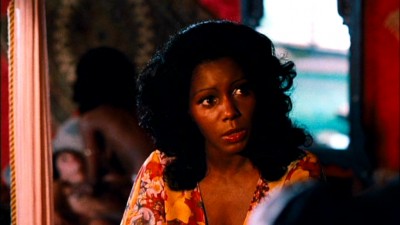 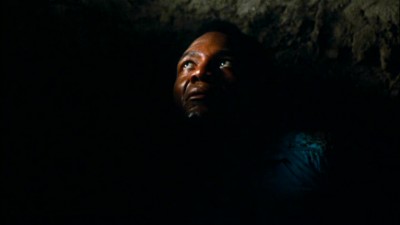 Those "politically correct" to the point of humorlessness should avoid The Slams at all costs. The dialogue is crude and virulently racist, and no one is spared: black, white or homosexual (as it should be). Termed in the vernacular of the times ("Suckers!" Brown sneers when he wastes those first two dudes; later he commands, "Come over here with your bad self," to the jaw-droppingly beautiful Pace), it's easy to laugh at all the funny 70s dialogue. However, it's important to remember that a movie like The Slams is a hell of a lot more honest about all its characters' prejudices than the "official version of Life as we decree it" coming out of many mainstream Hollywood productions today, where racism and prejudice can be depicted in a facile, safe, and almost invariably one-sided manner (I love the trip to Paul Harris' Jackson Barney headquarters, with all the expected―and welcome―nudity, before the pimp quite seriously tells Pace how to solve Brown's problems: "He needs a good white Jewish lawyer.") The cast here is solid, another bonus. Frequent The Untouchables actor DeKova gets a good inside joke when he watches TV in his cell, commenting on how television declined when they took that gangster show off the air. And I love producer Gene Corman recreating a bit of Ski Party fun with Dick Miller popping up again as an unwitting cabbie. Brown in particular, though, is terrific; he holds The Slams together, striking exactly the right note of that most American of movie stereotypes: the anti-heroic "hero" criminal who honors his code first before all other loyalties (the most memorable lines belong to him, including the movie's best, when addressing DeKova's huge black henchman: "You tell your boy to do what he's told, because I don't want to get shit on my shoes kicking his ass!"). It's an assured, hard-assed performance, in a tough, nasty exploitation thriller that deserves more attention. 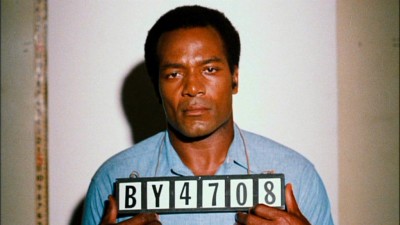 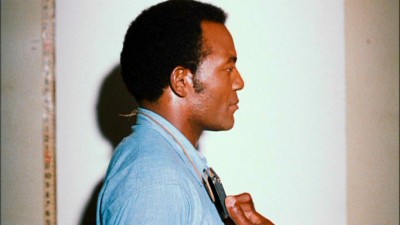 The Video:
The anamorphically enhanced, 1.85:1 widescreen transfer for The Slams looks better than I've ever seen it: sharp image, solid color, and minimal print damage.

The Audio:
The Dolby Digital English mono audio track is acceptable, with low hiss and no closed-captions or subtitles available.

The Extras:
A fun original trailer is included here for The Slams.