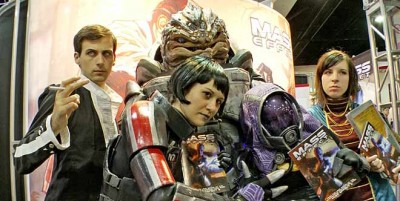 One of the most enjoyable moments in Morgan Spurlock's Comic-Con Episode IV: A Fan's Hope comes right at the top, as vintage still photos (in slide projector format, no less) are used to accompany a radio news story regarding the first ever San Diego Comic-Con back in 1970. They were "hoping for about 500" attendees, and didn't get them. Times change. It is now the biggest sci-fi/fantasy/pop culture convention in the world, drawing over 125,000 attendees a year, in addition to filmmakers, movie stars, TV personalities, gamesmakers, and comic book dealers hoping to exploit that demographic.

This documentary, shot at the 2010 Con, counts among its producers such standbys as Joss Whedon, Stan Lee, and Ain't It Cool News' Harry Knowles. It appears to be a for-hire job for Spurlock, the director of Super Size Me and The Greatest Movie Ever Sold; for the first time, he stays entirely off-camera (not even providing voice-over), and it bears little mark of his influence--aside from the insufferably cutesy title. But it maintains the quality of his previous work: it is scattershot and somewhat aimless, and simultaneously charming and entertaining.

He doesn't attempt to craft a definitive biography of the convention, or explain its tremendous rise. It's more an effort to capture something of the experience of being there, via interviews with famous guests and everyday fans, as well as a quintet of stories concerning those who make the pilgrimage. There are two would-be comic book artists, one of them a bartender from Columbia, Missouri, the other a military man from Minot, North Dakota. There is a young woman who designs elaborate video game-themed costumes, and builds them in here garage in San Bernadino, California. There is the owner of Denver-based comic book dealer Mile High Comics, who's been coming to the Con for 38 years. And there are the young lovers who met at last year's convention; he plans to propose to her at this year's (at the Kevin Smith Q&A, no less).

These are all likable people, and what narrative momentum Spurlock works up is due to their affability and genuineness. The proposal scene is giddy and sweet and great; some suspense is generated by our hopes that the artists will impress at their portfolio reviews, and that the complicated animatronic costume the designer has built for the "Masquerade" doesn't malfunction. Our identification with the subjects is somewhat complicated, however, by one simple but bothersome error in judgment; it takes quite some time to piece together, though conversational cues and context clues, what these people's names are. When they're identified via on-screen text, it's not by their proper names; they're each given a label ("The Geek," "The Soldier," "The Survivor," etc). Way to undercut the message of honoring everyone's uniqueness by slapping a generic label on each of them.

As their narratives unfold, familiar faces pop up (on an Apple/Errol Morris-style stark white backdrop) to talk about the Con, and geek culture in general: Lee, Knowles, Kevin Smith, Eli Roth, Edgar Wright, Matt Groening. Guillermo del Toro and Seth Rogen talk about the psychology of the collector (I can relate). Joe Quesada, Frank Miller, Robert Kirkman, and Todd McFarlane talk about breaking into the business. And Whedon gets right to the heart of shared fandom: "Are we not dope? Are we not amazing, for being obsessed with the same thing?"

The most valuable moments, really, are the observational ones, when the cameras catch the logistics of the experience--standing in lines, strategizing purchases, taking your plastic swords or Thor hammers to the "costume weapons check stand," showing off your costume (a Star Wars group photo shoot yields directions like "Buckets off!" and "Storm troopers, you're not smiling!"). Some of it rings a little false--even a non-comic fan like myself has heard tales of Stan Lee charging for autographs at conventions, which makes the executive-producer's "love the fans" schtick somewhat disingenuous--but it's a lot of fun, and isn't that what it's all about anyway?