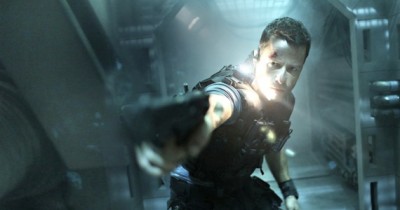 Look, I like a big, dumb action movie as much as the next big, dumb action movie lover, but a man must have his limits. Lockout violates those limits, and then laughs at them. This is one astonishingly insipid film, a crude, unimaginative piece of ugly claptrap, consisting entirely of spare parts assembled with a minimum of style or enjoyment. It's a tacky, tinny, dopey mess.

The script, a collaboration between directors James Mather and Stephen St. Leger and producer Luc Besson, is like a checklist of leftovers from other, better action movies. The plot: in a future world where dangerous prisoners are put into a sleep state (Demolition Man), a single, gruff action hero is sent into a prison state to rescue the president's daughter (Escape from New York) and sneak through the ducts and passages, eluding the dangerous men who have taken several innocents hostage (Die Hard). Lockout is less a film than an echo chamber; every moment in it recalls something from somewhere else, to the point that the filmmakers even ape Star Wars with an aerial dogfight attacking a space satellite. By the end of the film, I was expecting a shot of a sled going into a fire.

The specifics: It's Washington DC, in the year 2079. Snow (Guy Pearce) is an ex-CIA operative who's been framed for the murder of a fellow agent; he's on his way to "M.S. One," the super-max prison facility in the sky where prisoners are put into "stasis" for the duration of their sentences. Wouldn't you know it, though, the President's daughter Emilie (Maggie Grace) is visiting the prison on a fact-finding mission, with her three Secret Service agents her only protection. (Sure.) When the prisoner she's interviewing steals an agent's gun, he takes the girl hostage and releases all of his fellow inmates, who then take over the facility. But if Snow can slip in and save the girl...

This is the kind of movie that presumes that if it moves quickly enough, audiences either won't ask the obvious logical questions, or won't care. But that "shoot first, ask questions later" strategy applies to the whole film; it's such a paint-by-numbers enterprise that basic questions of motivation and characterization are skipped entirely, because we've seen it all before, and thus know how it's supposed to go. Once the prisoners are freed, Alex (Vincent Regan) is immediately in charge; what's suspiciously absent is any information about who he is or why he's the one who takes over. But someone has to, as years of viewing movies like this has confirmed, so it's him, then, I guess?

And because the president's daughter is prim, hot, and blonde, we also know that she and our grizzled hero will first despise, then respect, and finally fall for each other; their repartee is painfully contrived (suffice it to say, this ain't Hepburn and Tracy-level banter), and their final conversation is, thus far, the runaway winner for the year's worst single scene. (Runner up: the BIG SURPRISE TWIST CONCLUSION that precedes it.)

This much must be said: Pearce is a far better actor than this material deserves, and he's a good, snug fit into the reluctant man of action role, generating occasional laughs and goodwill throughout by making the specific choice to wink at the role by playing it almost, but not quite, straight. But for every good line he gets (Heavy: "I don't like hurting you." Pearce: "Is that why you're having him do it?"), there are seven or eight clangers (Heavy: "What's his name?" Pearce: "Fuck you. He was Asian." No expiration date on that gem!).

In his directorial efforts (Leon, La Femme Nikita), and occasionally in his gigs as writer/producer (Kiss of the Dragon, District B13, Taken, the original Transporter), Luc Besson clearly knows how to do smart action that also thrills. But it's also clear when he's phoning it in. It's tempting to think that, because he's an intelligent guy, the familiarity and cheese of Lockout is actually some sort of sly satire on genre conventions, that he's actually sending this stuff up instead of lowering himself to it. But Lockout is too dumb to be that smart. He's pitching this one to the cheap seats, and if it beans a few people on the head, he presumes they'll hardly notice.