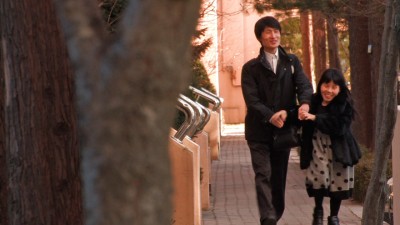 Young-chan is blind and deaf. His wife, Soon-ho, is a little person, standing roughly half his size. This sounds, it must be said, like the set-up for the most insufferably twee romantic comedy ever. It's not--it's a documentary by Yi Seung-jun with an uncommon stillness at its center. In the film's opening sequences, we watch the couple's routines and interactions, which Seung-jun presents quietly and without comment; they live together, eat together, work together. He goes to school, and she sits at his side, tapping on his fingers to communicate. He exercises in their home, and she warns him when he's about to go into a wall. She can't reach a light-bulb that has gone out, so he has to change it, which is harder than you'd think when you can't see what you're doing.

Seung-jun works in an observational but removed verité style (he is only heard off-camera once, when Young-chan tosses a pine cone that hits the director in the face). In fact, it takes a good long while to even find out how they met, or what their story is; their friends finally tell the tale a good third of the way in, and Young-chan adds to it later, calling their marriage "a miracle." But the movie is less about those big pronouncements than it is about the practicalities of their day-to-day, moment-to-moment existence; if you've ever wondered how many blind men it takes to change a light bulb, you will get the full answer here. (The answer is one, thank you very much, but it does take some time.)

The pacing and the style of the film are certain to alienate less patient viewers--this is not a fast-paced picture, and it is occasionally trying. But the protagonists are fascinating people; Yong-chan is an intelligent, good-humored guy, and Sooh-ho's affection and dedication is clearly deep and full. "I envy the love the two of you have," their friend tells them, though he also clearly envies that Young-chan has a constant helper and translator.

In the film's final sections, those questions of dependence come into sharper focus--what would he do without her? And what, emotionally, would she do without him? "It seems would should die at the same time," she says/taps to him. Shortly thereafter, they must spend a day apart, and it is clearly an ordeal, in its own quiet way; the things they say to each other when they see each other again are beautiful, and haunting.

If Planet of Snail has a fatal flaw, it's that it doesn't end there, with what would have been a perfect closing shot and immaculate concluding dialogue. It goes a good fifteen minutes longer, with a flaccid sidebar about a play Young-chan has written, and this viewer had already checked out; that's all padding. Planet of Snail has astonishingly lovely moments, and tells a story you've certainly never seen before. But it often plays like a wonderful documentary short that has been stretched out to a feature length that it can't quite sustain.