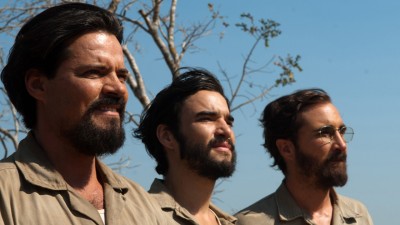 First and foremost, Xingu is an adventure story--as is any film, really, that begins with a phrase as evocative as "I was 26 years old, looking for my place in the world." The brothers Villas-Bôas--Orlando, Cláudio, and Leonardo--joined the "march west" into central Brazil in the early 1940s for life experience. But they found that the territory they'd been sent to clear and prepare for habitation was not quite so "unoccupied" as they had been led to believe: it was the home of indigenous Indian tribes, who had their own lives and cultures to protect. Miraculously, the Villas-Bôas brothers managed to keep them protected.

Xingu tells their story in a straight-forward, docu-drama style, somewhat following a template, but captivating nonetheless. Their story is a rather extraordinary one: how they made first contact with the local tribes, who were confused and fascinated by their sugar and spectacles; how they built air strips and outposts with, rather than in spite of, the indigenous peoples; how they tried to help those tribes, bringing them medical care and setting up reservations; and their horror upon discovering, upon a pilgrimage to a neighboring village, that not all visitors were taking the care that they were.

There are complications, of course--shifting loyalties, lying politicians, personality clashes, and the inevitable realization that, try as they might do otherwise, the pull of the power they eventually accumulated can be irresistible to exploit. To this end, director Cao Hamburger (who wrote the script with Helena Soarez and Anna Muylaert) works admirably to bring the three men to life, and to convey their mounting sense of frustration and hopelessness as the region becomes further developed and harder to maintain.

The writing is occasionally clumsy (mostly in the narration--we probably don't need obvious information like "This encounter would change our lives forever"), and if the film has a notable defect, its that it possibly too epic in scope, at least for its standard 100-or-so minute running time. The screenwriters have to bang through a long period of time and a lot of information, and easy to lose one's bearings within the two-plus decades of the story; giant leaps occur in montages and cuts, skipping a year, two, more, while a particular two-year jump towards the end is especially confusing.

But the look of the film is striking--Adriano Goldman's cinematography is luminous, and several small touches (like a vital confrontation that's played in silhouette) stand out--the story at its center is simply riveting. Xingu is a somewhat predictable movie, almost a Brazillian Dances with Wolves. But it is told with enough color and flavor around the edges to keep the interest of even a jaded viewer.