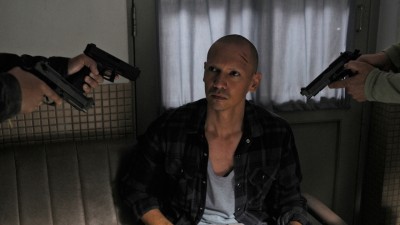 The unlucky hero, wrongfully accused. The beautiful girl who's way out of his league, yet is inexplicably drawn to him. The would-be victim who turns out to be tougher and wiser than she looks. Pen-Ek Ratanaruang's Headshot uses familiar, even cliché, elements of film noir (they even throw in a hooker with a heart of gold, God bless 'em), but fuses those noir components with a decidedly Eastern action aesthetic. The result is a film of high style and assured cool, even if the storytelling gets a little gummy late in the game.

Ratanaruang (who also wrote the script, from Win Lyovarin's novel) starts his story in the middle, as Tul (Nopporn Chaiyanam) receives an assignment by mail. He is a hired killer; the envelope has the pictures and names of a politician. He cuts his hair, almost ritualistically, and then, masquerading as a Buddhist monk, he executes the politician. But one of the bodyguards shoots Tul in the head. He appears dead by the five-minute mark (there's a sure-fire way to knock your audience immediately off-balance). But he's still alive, and after a three-month coma, he is released from the hospital--though he now has a glitch in his vision that turns everything upside down.

As this story unfolds, Ratanaruang intercuts the story of the killer's life after the injury with the steps that led up to it. Tul, we discover, was a cop--and a good one, resistant to corruption and influence. His refusal to play the game landed him in jail for a crime he didn't commit; his only way out of the pen was to go to work as a for-hire killer, never aware of who was pulling his strings.

The flips in the chronology which allow the intermingling of the storylines are clever and well-executed, keeping viewers slightly disoriented, yet never lost or confused. Ratanaruang has an economical storytelling sense--he skips big chunks of time and activity that seem important but prove not to be. Yet he takes his time with a strange detour of Tul going on the lamb, which turns out to be more connected to the rest of the narrative than you might think. (Ditto the searching, philosophical voiceovers.)

He's no slouch visually, either; the picture is heavy on the subjective camera, to its benefit. The ingenious use of point-of-view is established early on, during that first hit, but is particularly effective after the injury, allowing us to see the upside-down world as the protagonist does. (The cinematographer is Chankit Chamnivikaipong.) The compositions are elegant--a harrowing torture scene is mostly played in an artful medium-wide shot, but those screams get us close enough--and the action sequences have real snap, the director showing a clear affinity for throwing witty curveballs into the commotion.

Headshot falls apart somewhat in the third act, as the script succumbs to some narrative muddiness--I'm not exactly sure who ends up after him, specifically, or how--and the often unavoidable urge to throw in one (or, in this case, maybe two) twists too many. Still, it's a sharp, taut, scrappy affair, its gutty construction and roughhouse style worked out with skill and finesse. Ratanaruang is apparently something of a legend in his native Thailand; Headshot should endear him to plenty of genre fans here in the States.