A creepy, cheesy horror anthology from the U.K., 1973's Tales That Witness Madness counts among the latest vintage Paramount-distributed films that are currently getting redistributed on DVD through Olive Films. Its four segments all concern people who have been driven mad by various wild circumstances. Altogether, the stories are told with simple characters, by-the-numbers shocks, and "twists" that most viewers will spot from a mile away. As long as you dial your expectations way down, there's some kitschy thrills to be had amongst these tawdry tales of psyches that collectively took a wrong turn at Albuquerque.

The bridging segments in Tales That Witness Madness take place during one dark night at a maximum security insane asylum. Hearing of the unusual patients under observation at the facility, Dr. Nicholas (Jack Hawkins) visits with his colleague, the enigmatic professor Tremayne (Donald Pleasence), to learn more about how these strange, special cases came to be. Under the spell of home-made cocktails mixed in the facility's chemical lab, Tremayne takes Nicholas through the asylum's gleaming white hallway of rooms where each patient is sequestered, regaling us with their spine-chilling back stories: 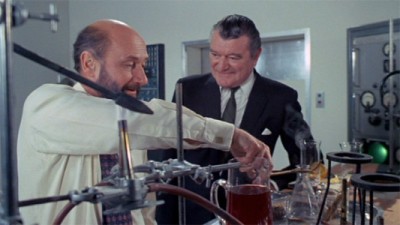 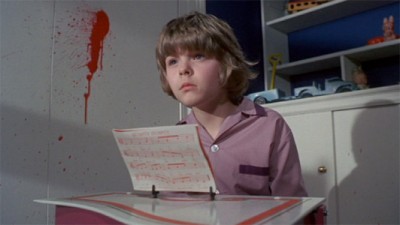 Well ahead of the time that Tales That Witness Madness reaches the conclusion that ties these stories together, it becomes apparent that this is one of the more lackluster UK horror entries - for three of these four segments, at least. Its attempts to dose out frights and dark humor in equal amounts make it doubly disappointing. The film has the feel of a marathon of mild, less compelling Night Gallery episodes from that period, perhaps one with a bit more gratuitous blood and gore. There's also the inevitable bare breast shots, one of which involves Joan Collins' character (more than likely belonging to a body double). The Collins segment, Mel, wound up being the most funny and intriguing. After all, how often do tree fetishists pop up in movies? Collins looks foxy as well, doing her best with a thankless role.

As for the other segments, Mr. Tiger is too slight and predictable, while Penny Farthing is a mess that borders on the incomprehensible. Luau boasts the most complex script, but it fails to rise above the kind of pulpy stuff handled in a zillion b-movies of yore with the exotic villains threatening the pampered white women. Perhaps the oddest aspect of this already weird exercise lies in the performance of Kim Novak, whose slurry, vulnerable take on Auriol makes one wonder exactly how much of it was acting (or was she tipping back a few between takes?). Novak was apparently coaxed out of retirement to appear here, replacing her Pal Joey co-star Rita Hayworth. What motivated her to return in a low-rent Brit horror flick like this is a mystery. Surely she must have known of what Tales' director, Freddie Francis, did for Joan Crawford in her "murderous cavemen need love, too" opus, Trog (1970). 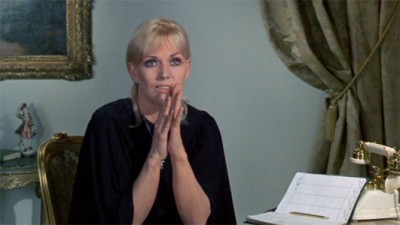 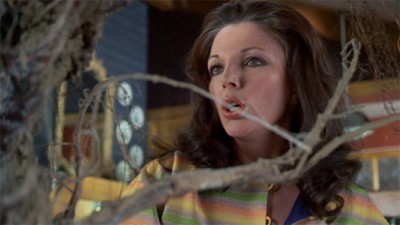 The anamorphic 16x9 image on Tales That Witness Madness is somewhat soft but nicely balanced and remarkably free of grain and dirt. Visually this one fares better than Olive Films/Paramount's recent disc treatment of another 1973 film, Hit!.

Tales' soundtrack is decently mastered here with dialogue and music mixed in clear manner with no apparent glitches. No subtitle options on this no-frills disc.

While Tales That Witness Madness holds a certain camp appeal for fans of cheesy '70s British horror, even on those low, low standards it doesn't hold up. While the man-loves-tree segment Mel has a cheeky, offbeat charm, the others wind up being done in by lameness and predictability. Kim Novak's appearance may be worth a peek for those with a macabre interest in older silver screen sirens debasing themselves in exploitation fare, everyone else is well-advised to skip it. 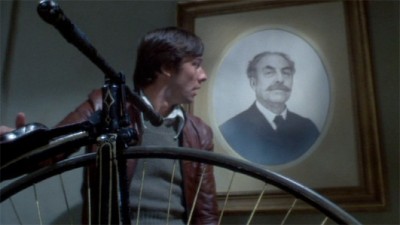 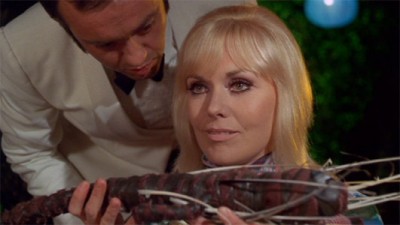