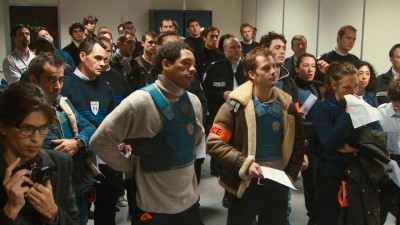 Polisse, the Cannes Jury Prize winner from writer/director/actor Maïwenn, opens with on-screen text, informing the viewer that the film is based upon "real life cases of the Paris CPU (Child Protection Unit)." You almost expect to hear the Law & Order sting after that, but the film itself functions as (among other things) a sharp repuke to the cleanliness and precision of television procedurals; it is more interested in reflecting the messiness of life, which does not wind itself up in 47-minute chunks.

Maïwenn juggles a large, unruly ensemble, and it takes some time and energy to sort everyone out. The players are introduced in a series of seemingly incomplete scenes, giving the viewer a sense of lives joined in progress--a welcome quality that remarkably few films bother with. (Most of the time, the characters seem to begin and end with the compact narrative.) There is a lot going on here, but it feels less scattershot than it sounds, and slowly, characters begin to drift into clearer focus, their qualities becoming more pronounced and recognizable. It's a risky way to tell a story, but the right approach for this one.

The filmmaker also has the good sense to introduce a new character who can serve as an audience surrogate--one who, significantly enough, is played by the filmmaker herself. Her Melissa is a photographer who is taking pictures for an official book on the department; it takes her some time to penetrate the tight circle of cops. Their story unfolds with a documentary intimacy, and the performances are behavioral, all at the right speed; one can't help but feel the guiding influence of Altman, as unexpected a touchstone as that might be in a French police movie.

But it's apt, because this isn't a film that is particularly about crime or punishment--it's a film about behavior. The CPU unit is close-knit, and not just on the job; they hang out on off-hours, blowing off steam at a nightclub after a big rescue, getting together in each other's apartments to drink, and Maïwenn gets how your colleagues in a high-pressure environment like this can so easily become your friends and your family too. And she also understands how, as a result, the work you do can get personal more carelessly, or how little offhand moments can turn into barn-burners when you know each other's buttons, and how to push them.

Unfortunately, she also knows that workplace romances are inevitable, which leads to the picture's most deadening subplot, in which her character falls for the hot-tempered Fred (played, masterfully, by the French rapper Joeystarr). The storyline goes in a couple of interesting directions, but it never fully recovers from their first big scene, which actually, seriously involves the literal removal of her glasses and letting down of her hair. (It really doesn't appear that they're trying to satirize that oh-so-creaky cliché, but if they are, they fail.)

That's about the only real glitch in the picture, though; it's involving and intelligent, mapped with the startling left turns of real life, its episodic structure accumulating into a vivid and punchy portrait. It's not all serious business--there are moments of odd, gallows humor and found vulgarity, and one scene where the officers' response to an astonishingly dense high school girl would be cruel if it weren't so understandable. But the moment that lingers comes late in the film, when a child must be separated from his homeless mother, and there's nothing slick about it: that child wails when she stands, clings to her desperately, and shrieks for, it feels, an eternity. It's a horrible moment, and we're not given the mercy of a cut; he cries it out. And Fred holds him in his lap, and lets it pass, and does his best. Too often, that's what these Polisse find themselves doing: waiting, and bearing witness.