Sony Screen Classics by Request // Unrated // March 6, 2012 // Region 0
List Price: $20.95 [Buy now and save at Amazon]
Review by Stuart Galbraith IV | posted April 23, 2012 | E-mail the Author
A decade before anti-Semitic rants derailed an already waning starring career, Mel Gibson produced this loving tribute to the decidedly Jewish comedy team that's the focus of The Three Stooges (2000), a fascinating, mostly accurate TV-biopic made in Australia. The actors playing Moe, Larry, and Curly (to say nothing of Shemp, Joes Besser and DeRita, and comedian Ted Healy) look almost nothing like their real-world counterparts and lack the clone-like exactness of the imposters appearing in the new Farrelly brothers movie, but the performances here are very good and, every now then, each captures the essence of the Stooge they're playing. Further, the recreations of scenes from the team's two-reel comedies are impressively accurate. The show has its share of inaccuracies, errors, and historical anachronisms, but in all the important ways The Three Stooges gets it right.

A manufactured-on-demand title from Sony, under its "Choice Collection" label, The Three Stooges is presented in 1.78:1 widescreen with 16:9 enhancement. The show as originally aired was inherently soft and grainy; this is an accurate transfer of that original production. 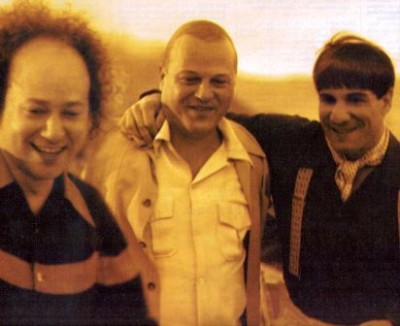 By the late-1950s, The Three Stooges are pretty much washed up, and de facto leader Moe Howard (Paul Ben-Victor) is reduced to running errands for duplicitous Columbia producer Harry Romm (Brandon Burke). The Stooges' two-reel comedies, by this point kaput, are being offered to local television stations and one executive from back east is hoping to talk the Stooges into make a personal appearance there. Moe resists the idea, but the executive's persistence causes him to reflect back on the team's labyrinthine career.

Moe and his brother Shemp (John Kassir) began in Vaudeville, as the physically abused, perennially underpaid stooges of headliner Ted Healy (Marton Csokas). Shemp, overwhelmed with myriad phobias, wants to split from the abusive Healy, but Moe is fiercely loyal and painfully unassertive, always willing to make the best of a bad situation.

Soon, comic violinist Larry Fine (Evan Handler) joins the act, and later the team is invited out west to star in a picture for Fox (mistakenly called 20th Century-Fox in the movie, which didn't exist then). Soup to Nuts is a bomb, but the Stooges, without Healy, are offered a seven-year contract there. Healy, by now a mean drunk and womanizer besides, has the Stooges blackballed. Shemp leaves the act, but another Howard brother, Jerome (Michael Chiklis), shaves his head and bushy mustache to becomes the new third stooge: Curly.

They strike out on their own, playing nightclubs and out-of-the-way houses beyond Healy's reach. Eventually they're signed to make two-reel comedies for Columbia and its dictatorial studio head, Harry Cohn (Linal Haft, who actually strongly resembles a bald William Castle). The comedies are hugely popular and profitable, a fact kept from the lowly-paid Stooges.

Drama is all about conflict, and The Three Stooges exaggerates and misrepresents certain aspects of the their lives and personalities in order to create some. Healy was indeed a mean drunk by all accounts, but here he's also depicted as irredeemably monstrous and untalented, neither of which was true. (Nor was he ever a has-been, as the movie suggests. At the time of his death Healy was still a much bigger star than the Stooges.) While things got so bad the Stooges could no longer work with him, Moe particularly loved Healy like a brother. A love-hate relationship between the pair would have been more accurate and more interesting, but Janet Roach and Kirk Ellis's script also has a lot of ground to cover in 90-plus minutes, so this is somewhat understandable. Late in the story Joe Besser, barely glimpsed, is depicted as similarly untalented and unreasonable ("two stooges and a holdout!"), an unjust characterization.

It's also not true that Moe was so poor during the late-1950s that he had to become Harry Romm's gofer. In fact just as the leader of the Marx Bros., Groucho, had carefully saved and invested his money while another member of the team (Chico in the case of the Marx Bros., Larry Fine in the case of the Stooges) frittered his away gambling and living the high life, Moe could have retired comfortably. However, Romm's shameful exploitation of the team while privately profiting off the Stooges' fame is accurate.

Also accurate is the basic depiction of Curly as an unhappy Stooge very aware of how his idiot screen persona spilled over into his personal life, causing him to drink heavily, and to let one gold-digger after another take him to the cleaners. In perhaps the show's best scene, Curly returns to his hotel late one evening, and is recognized in the lobby by a group of drunken revelers. Two attractive women approach him and, unaware of how the Stooges' violent act is carefully faked, begin slapping and punching him mercilessly. Chiklis's shocked and hurt reaction to this is extremely effective.* Elsewhere, Shemp's crippling phobias seem a bit exaggerated to me, though apparently he really was afraid of just about everything.

The only serious flaw rests in portraying Moe as a ringleader with no backbone, who'll let anyone and everyone walk all over them. The single time he asserts himself Ted Healy all but destroys the act and, at the end, someone else comes to the Stooges rescue, and even then Moe resists that lifeline.

Emotionally though, The Three Stooges captures the essence of the team and the fine performances by all captures both their offscreen personalities while impressively replicating little nuances when on camera. The depiction of the team's years with Healy in Vaudeville is especially authentic and praise-worthy.

Presented on a region-free DVD-R, The Three Stooges gets a good 16:9 enhanced widescreen transfer, while keeping in mind that the original film bathed in a lot of amber-colored nostalgia, with many grainy dissolves from color to black-and-white recreations and back again. It's a fine transfer overall, though. The stereo audio, English only with no subtitle options (or even a menu screen), is likewise fine. No Extra Features, unfortunately.

Those interested in a mostly accurate, dramatically interesting biopic about the Three Stooges should sample this earnest, generally excellent TV-film. Highly Recommended.

* Sergei Hasenecz disagrees, noting, "That Chiklis stands there and takes the assault rather than moving away or throwing up a hand to block after the first eye poke or punch seemed to me very unrealistic. He was waiting for them to finish their attack. The idea is right but the timing and execution are all wrong."