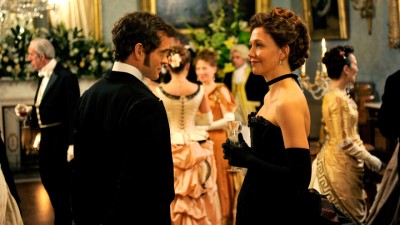 "Isn't she a Chinese firecracker?" notes Lord Edmund St. John-Smythe (Rupert Everett), after meeting the equally wonderfully-named Charlotte Dalyrmple (Maggie Gyllenhaal), in Tanya Wexler's Hysteria. And he's right. The daughter of a rich doctor, she has cast herself out of her family and spends all of her time working at a poorhouse, while occasionally dropping in on the household to raise a ruckus. "Does she slam every door?" asks her father's assistant, Dr. Mortimer Granville (Hugh Dancy). She does. It's one of her best qualities.

The good news about Hysteria is that Gyllenhall's performance is rich, earthy fun--she's both fervid and utterly charming, somehow managing to play the character's contemporary leanings without making it a distractingly contemporary performance. The unfortunate news is that it is very much a supporting role in a film preoccupied with other matters--and matters which don't intersect with her story in a particularly satisfying way.

The screenplay (by Jonah Lisa Dyer and Stephen Dyer, from a story written with Howard Gensler) is more concerned with Granville, a late-19th century doctor swimming against the tides of period medicine with his radical ideas, which lean towards more germ awareness and less "regular bleedings." He can't keep a regular job, so he ends up working for Dr. Robert Dalyrmple (Jonathan Pryce), a specialist in treatments of "hysterical women." The treatment is, well, vulva massage. The already-busy waiting room is overrun with smiling women once handsome Dr. Granville joins the staff.

The picture turns a corner once that discovery hits, finding its true comic spirit in the bawdy experiment on good-humored former prostitute Molly (Sheridan Smith, raucously enjoyable), the uproarious set piece dramatizing the machine's first use in the doctor's office, even the quickie conversation running down a list of possible names. But Wexler and her writers dawdle too much in getting to this, the film's reason for existence. Too much time is spent on the Dalyrmple family conflict, the simple-minded schism between the two sisters too neat to unspool compellingly, their arguments playing with a cripplingly familiar ring. Also, for whatever it's worth, it seems quite a waste to set up as attractive and good-natured a character as Charlotte and not include some encounter, even merely a mentioned one, with Dr. Mortimer's new miracle machine. And let's be honest, we've seen a film or two, so it's hard to have much patience while we're waiting around for her and the doctor to wind up in each other's arms.

But if the closing scenes feel like a bit of a march to inevitability, with some unfortunate detours along the way (there is even a courtroom climax, complete with syrupy score and big pronouncements), it's hard to work up much of an active dislike for a film so high-spirited and good-hearted--and timely, considering the recent longing, in some political quarters, for a return to Victorian-era sexual mores (at least with regards to the radical idea of women having sex for pleasure). The amusing images of early vibrators employed as accompaniment for the end credit crawl raise one bothersome question, though; would this material have played stronger in documentary form? Maybe--and maybe not, considering that would've deprived us a singularly wonderful Maggie Gyllenhaal performance.