Synapse Films // R // July 10, 2012
List Price: $29.95 [Buy now and save at Amazon]
Review by Stuart Galbraith IV | posted July 23, 2012 | E-mail the Author
Made during a particularly bleak period for Hammer Films, Twins of Evil (1972) is a pleasant surprise. While still exhibiting the same desperate components of the company's other horror films of the period - gratuitous nudity, an obviously low budget, and feeble attempts to create a new franchise/horror star - its screenplay is much more intriguing than most early '70s Hammers, the direction is lively, and it features one of actor Peter Cushing's best performances.

Synapse Film's new Blu-ray will be the first time many will have had a chance to see it. Though previously available on DVD in the UK, this apparently marks its first home video appearance in America since a 1990 VHS release. The presentation is a major improvement over Synapse's flawed 2010 Blu-ray of another Hammer title, Vampire Circus (also 1972), and like that film it comes with a mountain of extra features. Included is an epic-length documentary, "The Flesh and the Fury," which runs just three minutes shy of Twins of Evil itself. 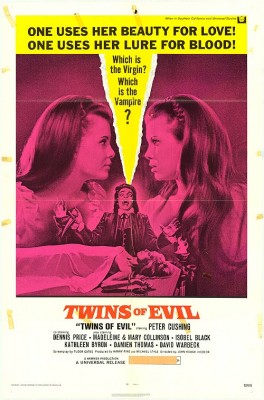 The story, a prequel of sorts to both The Vampire Lovers (1970) and Lust for a Vampire (1971), is set in 17th century Central Europe, where sanctimonious Puritan Gustav Weil (Cushing) leads "The Brotherhood," a band of fanatical witch-hunters.

Maria and Frieda (Mary and Madeline Collinson, respectively, Playboy's Playmates of the Month for October 1970, the first identical twins so honored), orphaned identical twin teenage girls, come to live with strict Uncle Gustav and his unhappy wife, Katy (Kathleen Byron, of Black Narcissus fame). Frieda, the more adventurous, less mindful of the two, resents her uncle's oppressive nature and gradually begins sneaking off in the middle of the night.

In particular she begins sneaking off to the castle of Count Karnstein (Damien Thomas), a bored aristocrat whose flirtations with Black Magic and Devil worshipping eventually beckon the spirit of an ancient ancestor, the vampire Mircalla Karnstein (Katya Wyeth, in Ingrid Pitt's role from The Vampire Lovers), who takes a big bite out of the Count's neck, turning him into a vampire as well. Karnstein then plots to defile both Frieda and Maria.

Although built around a stunt (sexy twins) while unsubtly titillating its audience with flashes of nudity and sophomoric sex scenes (including a laughable bit of symbolism involving a candle), and by having the Collinson twins all but falling out of their very anachronistic nighties, compared to other Hammer horrors from this period, notably Lust for a Vampire, Twins of Evil is comparatively staid.

More importantly, Tudor Gates's script actually has some pretty interesting (and ironic, considering the source) things to say about how men at both ends of the moral spectrum - decadent, ungodly aristocracy and supposedly pious religious types - seek to control or otherwise suppress women looking for a little equanimity. As genre scholar Kim Newman puts it in the documentary, instead of a movie with good guys and bad guys, here's a movie with bad guys and worse guys.

English Lord-types who believe rules and moral codes don't apply to them are characters often seen before, in films like Hound of the Baskervilles (1959), Curse of the Werewolf and The Hellfire Club (both 1961), but Gustav and his band of not-so-merry men is something new. Movies about or featuring witch-hunters had come into vogue following the commercial success of Michael Reeves's Matthew Hopkins - Witchfinder General (1968), but as writer-director Ted Newsom points out in the documentary, where Hopkins (Vincent Price) in that film was in it purely for the money, power, and sadistic glee it brought him, Cushing's Gustav is a True Believer that, arguably, is even more disturbing. Newsom adds that the "Brotherhood" clearly "gets off on it" (burning witches) almost to a degree later spoofed by Monty Python. I don't think that's true in Gustav's case, but rather his is an extreme response to an undefined rage he feels towards others, women particularly, whose moral standards don't match up to his.

Twins of Evil was one of the first films Cushing completed following the death of his beloved wife, Helen. Somewhat sadly this trauma indirectly enhances his appearance and performance. Virtually overnight Cushing aged at least 10 years (so much so that his role as Stephanie Beachman's father in Dracula AD 1972 was changed to her grandfather), and he's so alarmingly gaunt that his facial features are positively skeletal.

Further, the overwhelming emotions of his personal tragedy spilled over into a few of his performances, particularly this and his role in 1972's Tales from the Crypt. Gustav's rage and anguish are palpable, and genuinely distressing in a few scenes.

The Collinson twins, their apparently thick Maltese accents overdubbed by another actress, are quite good, considering. They're sexy but also project a genuine air of innocence. And despite being identical twins, it's actually fairly easy to tell them apart (Madeline has very slightly fleshier features and her gestures are subtly saucier, even when the script doesn't necessarily call for it. Apparently off-camera their personalities were quite similar.)

John Hough's direction is taut and the movie is consistently lively, while Harry Robertson's score, particularly its almost exhilarating main title cue, is among the best for a later-period Hammer film.

Twins of Evil is a marked improvement over Synapse's Blu-ray of Vampire Circus, whose colors and/or brightness levels were unnaturally, unaccountably tweaked. But Twins of Evil looks just fine. I remember 35mm theatrical prints being unusually sharp and colorful; this video transfer comes very close to matching that experience. The film is uncut, running 87 minutes. It's preceded by a Rank Films logo, rather that sourcing elements from its American distributor, Universal. The film is properly matted to 1.66:1 widescreen and is Region A encoded. (A region 1 DVD is also included.) The DTS-HD Master Audio is likewise excellent. A DTS-HD MA music and effects track has been included, along with optional English subtitles.

The big extra is the extravagant "The Flesh and the Fury," an 84-minute documentary covering everything relating to Twins of Evil. Director-editor Daniel Griffith and his Ballyhoo Motion Pictures seem to have been heavily influenced, in a good way, by Kenneth Bowser's excellent 2003 adaptation of Peter Biskind's Easy Riders, Raging Bulls, as it utilizes many of the same visual techniques. (And other stuff, too, including cutaways to movie titles projected on women's midriffs, clearly inspired by Robert Brownjohn's titles for From Russia with Love.) Bearing in mind that it was made for hardcore Hammer fans likely to eat it all up, the documentary nonetheless could have been trimmed. A lot. I think it probably would have been twice as effective at half its present length, though inarguably it's extremely slick and well made.

Griffith also directed the more conventional but equally fascinating "The Props That Hammer Built," a tour of one especially good private collection of amazing artifacts.

Also included is a motion still gallery, with lots and lots of good images; a deleted scene that explains what plays almost like a jump cut in the finished picture; trailers and TV spots, all in high-def.

Twins of Evil is a real crowd-pleaser. Though not scary per se, Peter Cushing's exceptional performance and the mostly intelligent script by Tudor Gates, combined with John Hough's enthusiastic direction, add up to one of the last really good Hammer horror films. Highly Recommended.