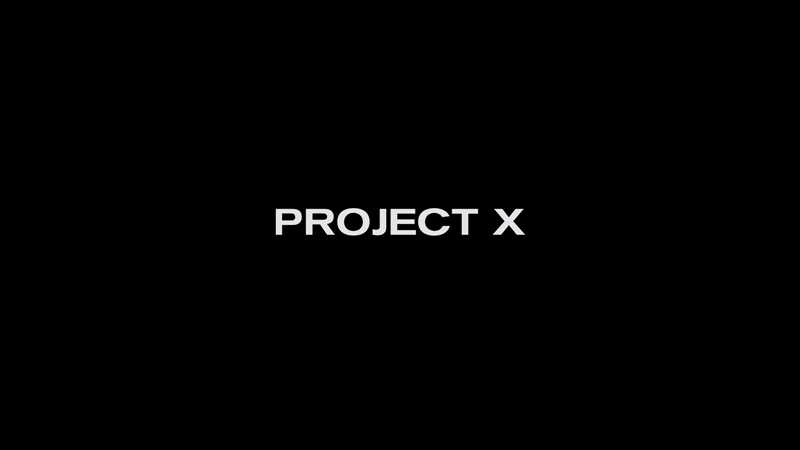 
The Movie
The first time I'd ever heard of Todd Phillips was when a saw his film Frat House, which he made with Andrew Gurland (The Virginity Hit, The Last Exorcism.) A gripping first-person look inside fraternity hazing, it's never aired on TV (it was originally made for HBO) and it's never been released on home video, reportedly because of lawsuits by some of the frat guys profiled, who claimed the movie was faked. Considering both have moved into the found-footage mockumentary genre, maybe that's true, but if so, it was just the first clue that they know how to make a fake movie look real. Thus, it's no surprise that Phillip's name is attached as producer to Project X, a star-free found-footage document of youth gone wild, a chronicle of awful people having a great time.

That great time takes place at Thomas' 17th birthday party, which is being coordinated by Costa, his foul-mouth scumbag of a best friend, and taped by a creepy A/V geek named Dax (seen just once to put a face on the cameraman.) Through word of mouth and social media messaging, a small party while Thomas' parents are away quickly escalates into an epic rager that will change his social status, and gets way beyond the control of Thomas, Costa and JB (their fat pal, filling the Jonah Hill quotient.) To say that this film is predictable is like saying that The Avengers made a little money in theaters. At the beginning of the film, writers Matt Drake and Michael Bacall lay out every thing that will go wrong over the course of the movie so neatly that it's surprising they weren't accompanied by an on-screen checklist.

In the hands of first-time feature director Nima Nourizadeh, and backed by a booming club-music soundtrack, the party is a hyper-kinetic extended cut of Fiona Apple's "Criminal" video, just with more exposed breasts, urination and drugs. Using a blend of camera types, close-up video and a variety of lighting techniques, music-video veteran Nourizadeh puts you directly in the path of this hedonistic hurricane, letting you experience an approximation of Thomas' spiraling evening, and have an understanding of why he'd be convinced to allow his family home be trashed in the name of being cool. 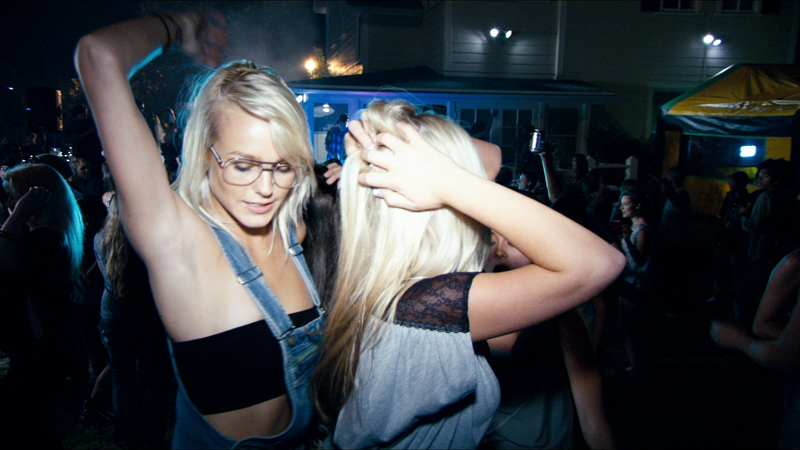 Now, for a teen who is immortal, owns nothing and recognizes no responsibility, watching such chaos explode in the middle of a quiet suburban neighborhood is a fever dream splashed across the big screen, but if you've ever paid a mortgage or insurance payment, or are a parent, it's hard to lose yourself in the drug-fueled sex and big-dollar property damage. Perhaps it's the way it's presented, as a home movie imbued with realism, that makes it more difficult to embrace the bedlam, but the party-goers don't really seem like they're having fun, but are instead angry and mean, looking to destroy and take what they want.

Making matters worse is one of our "heroes," Costa, who may be one of the most reprehensible characters in teen-movie history. Whether he's cursing out a homeowner who just wants his house to be safe and for his family to be able to sleep, insulting and abusing his supposed friends or destroying his pal's life in his own selfish quest for sex, Costa is just awful. Yes, this helps illustrate that Thomas is mostly good at heart, driven to self-destructive behavior by peer-pressure and primal urges, but it's hard to enjoy a film that spends so much time with a character so annoying that the characters in the film don't want him around.

With about 25 minutes left, the situation moves past the fun of a party into the horror of anarchy, as the police finally decide to take action and everything gets on board a bullet-train to hell (if this was the way the Pasadena police rolls, the good people there would need to get Century 21 on the phone quick.) Though the movie quickly drops any pretense of comedy (laughs are few and far between during the majority of the film anyway), it's welcome, as this is easily the most interesting part of the film, because there's actual emotion and story on display, you might actually care about what's happening and it's completely, insanely out of control. What this film captures better than anything else is what happens when civilized society breaks down. Unfortunately, what's happening still involves characters you'd rather see suffer than succeed, and the movie doesn't commit to putting them through the wringer in a way that would have made for a legitimately entertaining and affecting 180-degree turn.

The worst thing about this film, beyond the way it depicts a depraved bacchanal featuring a generation of directionless, alcoholic pill-poppers, is the way it views the cost of cool. As anyone who's matured beyond their high-school years can tell you, 98% of the friends and experiences you'll have at that point are meaningless and fleeting, and paying any price for them is just stupid. Yes, this is a party movie and as such it has no responsibility to be weighty or consequential, but let the fun stand on its own, and make the cost its own element, so we develop real, human characters. Instead, we get a Hollywood ending loaded with wish-fulfillment that will make the douchebags in the crowd happy and maybe convince a few more kids to throw a huge bash in their parents' mortgaged ranch house that will probably ruin someone's life, one way or another. But hey, at least they'll be popular for a year, maybe two at max.

NOTE: This set includes both the theatrical release and the trendily-named #xtendedcut, which runs about six minutes longer. Interestingly, it's not just about cuts, because there are some small bits included in the theatrical version that didn't make it to the new release, which is notable for a lot more T&A, more party chaos, a lame rapper, some alternate lines and a bit more of Dax. None of it changes the movie for the positive, but if you're going to watch it, you may as well watch the "breast" version. 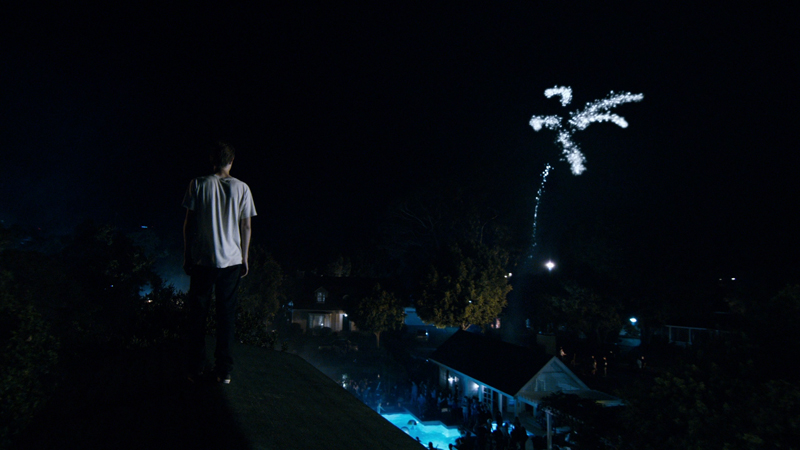 The Discs
This film arrives in a two-disc set (one Blu-Ray, one DVD) in a standard Blu keepcase with a slipcover that repeats the cover art. The disc includes options to watch the film, select scenes, adjust the languages and check out the extras. Audio options include English 5.1 DTS-HD Master Audio tracks on both versions, along with French, Spanish and Portuguese Dolby Digital 5.1 on the theatrical cut, while subtitles are available in English SDH, French, Spanish and Portuguese. Also in the pack is a code for a UltraViolet digital copy.

The Quality
The 1080p, AVC-encoded transfer handles the film's mix of source quality well, delivering the footage from Dax' camera in sharp clarity (though one wonders where he got a shoulder-mounted waterproof HD cam, how he kept it powered for over 24 hours and where he stored the footage.) For most of the film, the action is exceedingly dark, but the transfer handles it well, with deep black levels, a nice level of fine detail (check out the freckles when present) and solid color, avoiding issues with smearing and noise. The rough footage from cellphones and flip cams is loaded with issues, but that's inherent in their formats and the shooting conditions. Overall, the release doesn't exhibit much in the way of digital distractions, but even if it did, it's got the found-footage excuse.

Considering the film is primarily set at a DJ-scored dance party, it's no surprise that the music is strong, with bass-heavy songs pounding through many scenes. However, there were several moments which seemed rather quite by comparison, perhaps in an attempt to help the audience hear the dialogue, which ranges from inaudible to crystal clear, depending on the setting. Audio tends to be where found-footage films lose the narrative, as dialogue can be a little too audible for the existing tech, but there's always the excuse that the editor handled the mix. The audio tends to envelope the room, again depending upon what's happening on-screen, but the big montages sound terrific, moving sound around the surrounds well, and pulling off a few neat tricks to influence the feel, like the muted sound underwater and the way the audio works with the image to land surprise punches.

The Extras
It's hard to figure out why a film that did so well in theaters has been given such an weak Blu-Ray package. There's just three short featurettes that total about 14 minutes in all. First up is "Project X: Declassified, a 5:27 look behind the scenes of the making of the film, with interviews with the cast and crew. The focus is on how insane the production was, thanks largely to all the stunts. "Project X: The Pasadena Three" spends 5:39 on the casting of the three core characters, one of which was selected from online auditions. If Costa annoys you in the film, it doesn't get better here. Finally, "Project Xpensive" chalks up the cost of all the things damaged during the party, but it's played more for jokes than information, adopting the film's anarchic mindset. 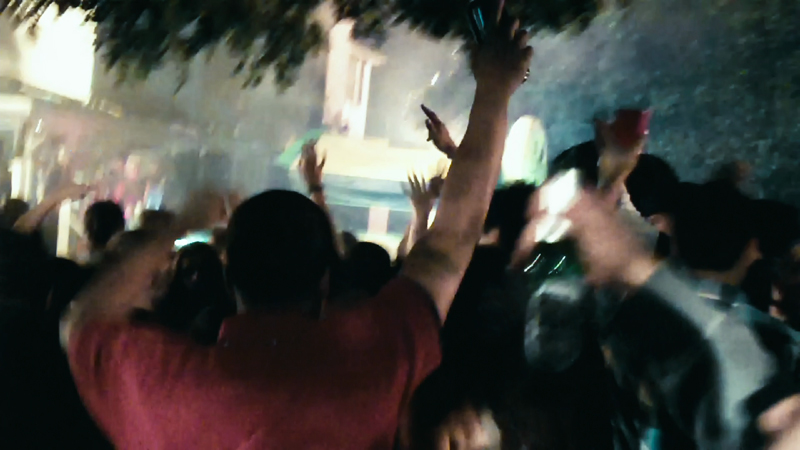 The Bottom Line
For kids who want nothing more than to watch other kids get drunk, high and laid, you couldn't ask for a better time, as interestingly-captured party chaos is all Project X offers, wrapped neatly in an oh-so-fashionable found-footage skin. If you're looking for a good story however, you'll need to look elsewhere. That's where you'll have to look for any real extras as well, as this set is remarkably short on bonus features, though the quality is very high, despite a lo-fi feel to the film.