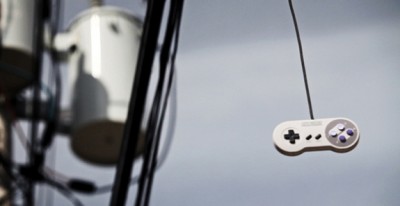 I do not play video games. Sure, I logged a bit of time with Galaga in my youth (yes, child of the '80s, how ya doin'), and went a round or two with Duck Hunt on the first Nintendo system, but that's pretty much the extent of my "gaming" background; from the teenage years on, I've found them a waste of time and energy, and have been consistently befuddled by their appeal to my peers.

This is not information that I'm sharing to ignite some sort of Ebert-style flame war, but as a roundabout way of complimenting Indie Game: The Movie, an outstanding new documentary by Lisanne Pajot and James Swirsky--because it made me care very much about a topic that filled me with indifference. There is plenty here (it could be reasonably assumed) that will interest those who play and make games, and the logistics of the industry will fascinate fans and neophytes alike. But the filmmakers wisely understand that, told right, this is a story that is about more than just pixels and controllers; it's about creativity and accomplishment.

It's primarily the story of the creation of two games, prefaced by a brief but helpful bit of background on the independent video game scene--a scene that was changed entirely by the introduction and ubiquity of digital distribution. Games used to require a major push from a big company that could manufacture, distribute, and promote; now indie games can be distributed via download, and the primary overhead is labor and creativity.

Edmund and Tommy are working hard (from opposite coasts) on "Super Meat Boy," an expansion of their popular flash game. Montreal-based Phil has been working for three years on an ambitious and eagerly anticipated game called "Fez," which he has completely redesigned three times and is still a work in progress. Their struggles are countered by the success story of Jonathan Blow, a San Francisco designer who toiled on unfinished projects for years before finally working up "Braid," an intricate quest game that became the most successful indie game in history.

The wisdom of Jonathan and the hunger of the upstarts are among the many contrasts subtly teed up by Pajot and Swirsky; they also contrast the intensity of Fish--a real character, angry and self-punishing and impatient, the kind of guy who says that if he didn't finish his game, he would kill himself ("That's my incentive")--with the more affable Edmund and Tommy, but then finding the breaks in their dynamic as well. Edmund is a happily married guy, who proposed to his wife from the podium when accepting an award for an earlier game, while Tommy lives a lonely existence of constant stress and solitary late-night meals at Denny's.

It is, under even the best of circumstances, a solitary pursuit, with hundreds of hours spent hunched over keyboards and peering at monitors. That wouldn't seem to make for the most compelling of cinema, but Indie Game finds a dramatic structure for each story and grips it tightly. For Phil, it is the previewing of his game at the Penny Arcade Expo in Boston--an event that he may have to drop out of at the eleventh hour if he can't come to an agreement with a former business partner. For Edmund and Tommy, it is their game's big release day, complete with advance reviews, early Twitter reactions, and the agony of a front-page placement on Xbox that was promised but not delivered.

These events don't sound much like high drama, but the picture's inventive execution, playful editing (it's constantly pushing and jumping, in both the game scenes and real life), and keen interest in the people at its center manage to generate genuine suspense and real tension. We may not have experienced the specific terror of bugs and crashes at a gaming expo, but it's hard not to sympathize with Phil's insistence that "Every time it crashes, it feels like a failure, a deep personal failure." And we may not know what it is to put a game out and wait impatiently for sales figures, but we can understand the way Edmund's wife Danielle tears up when they come in--not because of the monetary relief, but because of her overwhelming love and pride for her husband and what it does. When those tears fall, Indie Game becomes something more than a documentary about gaming. And in that moment, it becomes more than a good movie, but a great one.