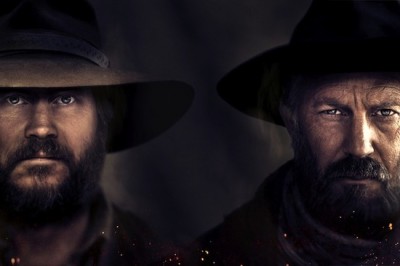 The Hatfields and McCoys were two hillbilly clans on the West Virginia-Kentucky border who spent a couple of generations killing each other over real and perceived infractions. The after-effects of this private war have echoed down the ages, having finally subsumed the entire political culture of the United States. (I'm partly kidding about that last bit, although perhaps it doesn't take such a leap to see the parallels -- more on those later.) Kevin Reynolds' well-made miniseries hews close to the factual outlines of the feud, crafting an entertaining, expansive three-episode, five-hour rendition of an oft-referenced historical event whose specifics are largely forgotten.

William Anderson "Anse" Hatfield (Kevin Costner) and Randolph McCoy (Bill Paxton) fought alongside one another during the Civil War. Following a near-suicidal act of gallantry, Hatfield goes AWOL and returns home, an act that reflects poorly in McCoy's view. Back home along Kentucky's Tug Fork, Hatfield's uncle, Jim Vance (Tom Berenger) kills a McCoy relation who has earned region's ire - and Vance's in particular -- for wearing Union blue. After McCoy returns from the war, a property dispute between the two families heightens tensions, although this is nothing compared to the blooming romance between Hatfield's son Johnse (Matt Barr) and McCoy's daughter Roseanna (Lindsay Pulsipher). Predictably, this brings things to a near-Biblical head.

Reynolds and his writers, Ted Mann and Ronald Parker, don't shy away from the fact that these were pretty unpleasant people whose wide malevolent streaks led to Viking-level savagery for nearly thirty years. Both lead actors are outstanding, delivering performances that are based neither in their stardom nor in the more sensationalistic aspects of their characters. Paxton's earnest, God-fearing McCoy is both bull-headed and sympathetic, and, as the quietly enraged Hatfield, Costner keeps his native charm in check to achieve a level of intensity unusual in the actor. I would say that, on the whole, the miniseries takes the Hatfields' side, at least implicitly. Hatfield characters have more screen time than the McCoys, and therefore most audiences will be prejudiced in favor of them. But this is a subtle effect, and is not necessarily the outgrowth of any particular judgment made by of the filmmakers.

For their first scripted drama, History (that's the cable channel, not the discipline) has provided a budget worthy of an epic melodrama, and the production reflects that. The photography and editing are polished. Reynolds shot the series in a sort of washed-out sepia tone. Added to that is meticulous design work and costumes, although there are a few hints of "2010s does 1880s" here and there, particularly when it comes to the younger actors' hair and makeup. The overall visual effect, however, is that of rifling through faded black-and-white photographs dug up in someone's attic trunk.

Whether intended by the filmmakers or not, I picked up on a subtext tied to contemporary American political discourse. Like the Hatfields and McCoys, who spent years battling to no end whatsoever at the cost of a dozen or so members of their families, Americans at large currently seem intent upon continuing an inane political debate taking place at various levels, the intended result of which has never been clearly delineated by either side. However, as with the Hatfield and McCoy dead, the price may be turn out to be those very precious things we seek so ardently to protect and preserve.

Image and Sound
Sony has released a crisp-looking Blu-ray. The 1.78:1 image is encoded at 1080p. Arthur Reinhart's photography is clean and bright, despite the grim world inhabited by the series' characters. This is a brand-new series, and the disc was struck from an original HD master, and the spotless image reflects that. The 5.1 DTS Master Audio soundtrack is immersive and dynamic, starting off with the opening Civil War sequence, in which rifles and pistols pop authentically across the soundstage. Gunshots are both sonically and dramatically significant in Hatfields & McCoys, and they have clearly been given special attention on the soundtrack. Most of the time, dialogue takes precedence on the soundtrack, although ambient effects are ever-present.

Bonus Content
The half-hour "The Making of Hatfields & McCoys" is a sufficient, if not spectacularly deep, extended EPK that includes sound bites from all the principal participants. There's also a disposable music video for a song called "I Know These Hills," performed by none other than Kevin Costner and his band Modern West. (They released an album of music inspired by the miniseries, called Famous for Killing Each Other, a line from the last of the three episodes.)

Tightly scripted and deftly executed, Hatfields & McCoys may become the definitive rendition of what has long been a familiar yet murky American story. Anchored by thoughtful characterizations and nuanced performances, this gripping miniseries succeeds on all fronts. Recommended.