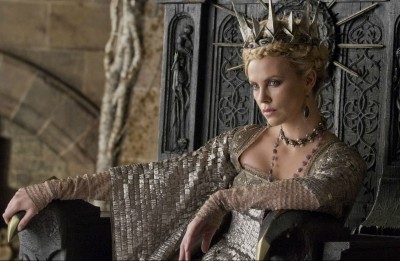 At risk of sounding silly, the main problem with Snow White and the Huntsman is that it's about Snow White and the huntsman. The title characters are played by Kristen Stewart and Chris Hemsworth respectively, but the film also has Charlize Theron acting up a storm as Ravenna the wicked queen, as well as a rogue's gallery of your favorite character actors as the seven dwarves. Both of these secondary elements are infinitely more interesting than the leads; they get a fraction of the screen time, with Theron all but disappearing from the middle hour. There must be nothing more frustrating for a filmmaker than finishing a big summer movie, and realizing when it's all over that you made the wrong one.

It all starts off promisingly. "Once upon a time, in deep winter," we're told, Snow White was born, and though her mother died shortly thereafter, she was raised with love by her father the king. All was well and good until he fell under the spell of the beautiful Ravenna (Theron), who married him, killed him, and took over his kingdom, locking young Snow White in the castle tower (this rewrite throws in some Rapunzel for good measure). The story zips ahead, as Ravenna's magical mirror tells her Snow White is the fairest of them all, so she decides to suck the life out of the poor lass (this is how she keeps her youth and beauty. It's a pretty neat trick). Before she can, however, Snow White escapes, so Ravenna hires the huntsman (Hemsworth) to track her down and bring her back. Adventures ensue.

Screenwriters Evan Daugherty, John Lee Hancock (The Blind Side), and Hossein Amini (Drive) have, as expected, given the story a decidedly more feminist bent, with a protagonist far less passive than in the original story (and far less inclined to do the dwarves' housework). But in making their Snow White a tough bruiser with a Neo-like responsibility as "The One" to save the entire kingdom, they turn the entire story into a dark, gloomy affair. Why do these remixed origin stories always have to be so little fun? Snow White and the Huntsman isn't the joyless slog of something like the Ridley Scott/Russell Crowe Robin Hood, but it doesn't offer up much in the way of pleasure--except when Theron is on the screen.

Her eyes burning, her voice a fierce whisper, her character literally devouring her younger co-stars, this is an all-or-nothing performance. She's doing a high-wire act here: one wrong step and she tumbles into camp. She comes close in a couple of moments, but for the most part, it's a charged and terrific performance, and as well-executed as the climactic battle scenes are, nothing in them is as satisfying as the sneer on Theron's face as she watches from a balcony above.

In the early scenes, it looks as though Stewart's intensely physicalized performance will get the job done. But she's a dour, disconnected actor, and as the narrative progresses, she's so emotionally remote that it's hard to care all that much about what happens to her. (Her comes-and-goes accent doesn't do the performance any favors either.) Hemsworth is a likable enough bruiser, but their romantic subplot is dull as toast, though positively pulse-quickening compared to the fake-out romance with William (Sam Clafin), one of the script's many unnecessary supporting characters.

The effects are, it must be noted, impressive--the queen's melting and reforming T2-style mirror is remarkable, and the visual effects in the fairy sanctuary are awe-inspiring--though that neat trick of seeing someone shape-shift after they get hit with a sword loses its novelty by the fifth or sixth time they trot it out. The dwarves (who include Bob Hoskins, Ray Winstone, Ian McShane, Toby Jones, Eddie Marsan, and Nick Frost) give the movie a charge of electricity and a dash of gravitas just when it needs both, and director Rupert Sanders puts together his action beats well. But he spends too much of the film's slack 127 minutes wandering around the forest with Stewart and Hemsworth, particularly since we're spending most of that time wondering what Theron's queen is up to.