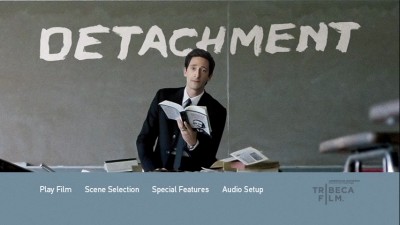 Tony Kaye's pro-teacher drama Detachment certainly strikes at something pertinent to the times we live in. Barely a week out from the first Presidential debate in the 2012 election, where Barack Obama laid out his desire to hire a megaton of new teachers to get the U.S. educational system back on track, it's hard to say if the American History X director's film makes for an argument in the President's favor or a warning to those who might join his legion to get the hell out while they can.

Detachment stars Adrien Brody as Henry Barthes, a long-term substitute teacher who has just landed a month-long job at an inner city school. It's an academy with a lot of history, the building clearly dates back many decades, but its interior has seen better days. As we learn through the embattled principal (Marcia Gay Harden), it's where the district dumps its tough cases, the kids who have trouble learning in any other environment. The teacher Henry is replacing apparently had enough of dealing with entitled teenagers and their angry parents; another leaves daily messages on the guidance counselor's answering machine saying why he won't be coming in yet again. Moments after arriving, Henry sees a raging mother get in another teacher's face because her daughter was expelled for spitting on that same teacher and threatening to have her gang raped. One of the older educators (a freewheeling James Caan) pops anti-depressants, or as he calls them, "happy pills," to keep from murdering the parents and/or helping them toss their offspring out the window.

Henry lays down roots and the law in his new English class. A firm existentialist, and a poet in his off-hours, Henry believes in taking crap from no one. Despite his exaltation of the power of words, he lives a life where disconnecting allows him to defuse their explosiveness. His unwavering stance helps him get a message across to his students: you can find life lessons in books, and you can use those lessons to escape being commodified, broken, and alone.

All three things that, arguably, Henry is himself. Particularly the last two. Henry lives an isolated existence. His only social life is visiting his senile grandfather (Mad About You's Louis Zorich) in his assisted living home. On the way back from one of those trips, a distraught Henry encounters a troubled teenage girl named Erica (Sami Gayle), who just finished giving an old man a blow job on the bus and getting slapped for her troubles. She gets under Henry's skin, and he eventually invites her into his home, where he cleans her up and tries to get her back on track. It's the kind of direct action Henry is not allowed in school, a Florence Nightingale/white knight moment for a man who needs to be needed, whether he knows it or not. 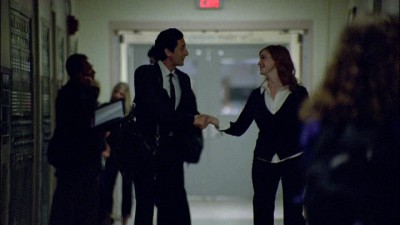 It's also the part of Detachment that strains against the film's credibility and causes the script to plummet into cliché. The teenage prostitute in need of salvation is a creepy male fantasy that should no longer be valid. Has screenwriter Carl Lund never seen Taxi Driver? It's disappointing because other than that, the writing is on point, managing to navigate the unfortunate predictability of the adolescent experience and the very raw pain of student and teacher alike. Some metaphors sag a bit from heavy intentions--Tim Blake Nelson (O Brother Where Are Thou?) plays a teacher who believes no one can see him, even as he strikes anguished poses in broad daylight--but the educators are otherwise presented as real and flawed. They are people there to do a job, and they talk to each other in much the same way a construction crew would: openly, honestly, and yes, even crass.

The cast makes as much of this material as they can. In addition to Caan, Harden, and Brody, who also served as executive producer, the ensemble is rounded out by Christina Hendricks, William Petersen, Lucy Liu, Blythe Danner, and Bryan Cranston. There isn't a slouch on the list, and given how small some of the roles are, it's obvious Detachment is a project that most of these guys took on for the love of it. Hendricks' brief scenes with Brody are warm and inviting, articulating an eagerness to connect that is maybe too earnest to succeed. Harden creates a tough veneer that she slowly, marvelously demolishes. Danner and Caan have two scenes together, where a pair of veteran actors play veteran teachers with the kind of natural ease only seasoned professionals can achieve. And, of course, there is Brody, who manages to be both enigmatic and vulnerable simultaneously, to keep everyone at arm's length while still somehow letting us in. He's very good with all the cast, but he shows a special exceptionalism when dealing with the teenagers in his care. There, too, the casting is excellent. Tony Kaye populates the school with unknown youngsters whom he directs to the proper emotional territory, keeping them from going overboard even as he portrays them as monsters. 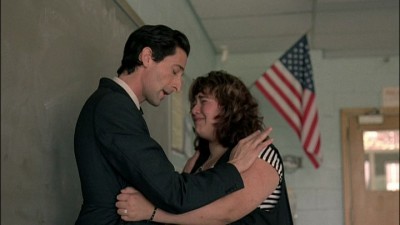 It's too bad that Kaye couldn't show the same restraint in his own work. The director, who also served as his own cameraman, burdens Detachment with an overabundance of style. His flashy technique distracts from the drama, almost as if he's covering for the film's lack of a traditional narrative flow. The main narrative is shot with a gritty immediacy that is only undermined by Kaye's regular cutaways to various inserts--home movies, animation, interviews, fantasies. These add little to Detachment's emotional impact; on the contrary, they jar the viewer out of the film precisely when Kaye should be trusting us to get what he's saying on our own. The chat sessions with Brody's character, in particular, seem like panicked equivocating, as if we might not otherwise suss out the capital-I importance of what we are seeing.

Detachment is a good movie that didn't need the pretentious flourishes. While one could argue that these additional elements illustrate Henry's arguments about engaging one's imagination when navigating this lonely and difficult existence of ours, it has the reverse effect: it undervalues our own engagement with what we are seeing and oversells the movie's message. Which is that teachers are important and the system is broken and it's helping neither the faculty nor the students to keep carrying on in this way. Detachment should have been a mainstream drama, not an arty-farty fringe piece; it's almost like the filmmakers didn't get their own memo. 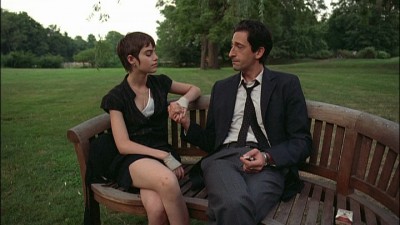 Video:
Detachment is presented on DVD as a widescreen, 16:9 image. The look and feel of the movie is intentionally grainy, shot in an on-the-fly, verité method. That is expertly represented here, with each of the varied elements of the film rendered with a differing style. There is the gritty stuff out on the streets, or the intimate digital footage, or the blown-out flashbacks--all look distinct and as intended. Jagged lines appearing in digital scenes don't come across as an accident, for instance, the transfer here is conscientious and aware. Colors look good, resolution is sharp, and there is no blocking, haziness, or pixilation of any kind.

Sound:
You have the choice of two Dolby audio tracks, either 2.0 or 5.1. The five-channel mix is dynamic and displays a lot of atmosphere. The ambient noise is worked all the way around, but never in a way that detracts or calls attention to itself. It's immersive, but appropriate.

Extras:
Extras include two interviews. One is a chat with Kaye and Brody in a studio setting, running four-and-a-half minutes, the other is on the red carpet at the Tribeca premiere, and it's just over three minutes and has just as many clips from the film as it does actual interview material. Kaye is fairly spastic in it, which maybe explains some of the aesthetic choices in the movie.

FINAL THOUGHTS:
Recommended. Detachment is a movie about the problems facing our schools and the difficulties facing students in the modern world that is not unlike the teenagers at the heart of its drama: it is sometimes overemotional and lacking in self-control, but it is well-meaning. Executive producer Adrien Brody leads an amazing ensemble cast, playing a substitute teacher who lives a rootless, brooding existence, and who finds some kind of grounding via his young charges. Not all the subplots work, and director Tony Kaye (American History X) is all over the place in terms of approach, but some solid writing and unimpeachably excellent acting ultimately pulls this one through. 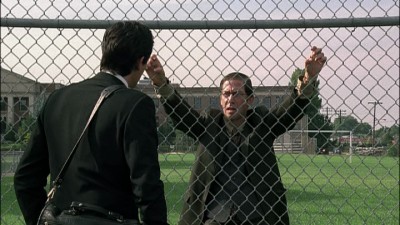