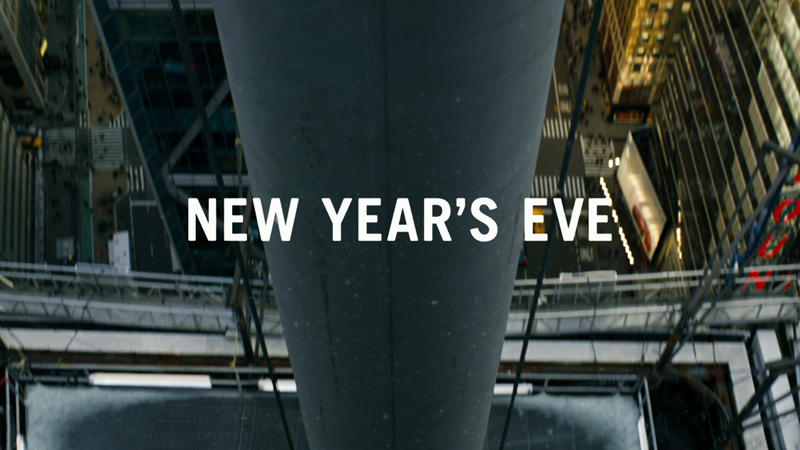 
The Movie
After Garry Marshall's Valentine's Day showed that a recognizable cast and a romantic holiday is a formula for box office success (story be damned), you knew it wouldn't be the last of its kind. So it was no surprise when a new gang of stars joined Marshall to explore the next-most romantically-charged day of the year, New Year's Eve. Set in America's epicenter of New Year's, New York City, Marshall was free to tell whatever stories he wanted with basically any character. And that's part of the problem.

This film has no star, spreading the leading roles among a dozen actors, including Hilary Swank as the woman responsible for the big Times Square ball drop, Michelle Pfeiffer playing a put-upon secretary working her way through an old list of resolutions and Katherine Heigl doing that thing she does, only this time as a caterer working a party for her ex. If you'll notice, these are all women, as are most of the film's heroes, who have been hurt before and pretty much are all being pursued by traditionally handsome men they keep at an arm's length, including Josh Duhamel, Zac Efron and Jon Bon Jovi. It seems like the moral of the story is guys can't be trusted, but if they are charming or good-looking enough, you can overlook that.

As the movie bounces back and forth among its nine main stories, including a race to have the first baby of the new year featuring Seth Meyers, Sarah Paulson, Til Schweiger and Jessica Biel, a dying man (Robert DeNiro) hoping to see the ball drop and a pair of opposites, Ashton Kutcher and Lea Michelle, trapped in an elevator, the movie fails to build any momentum and doesn't let us get to know the characters beyond their surface descriptors. While some of the performers can rise above, like Pfeiffer, who is fun playing against type and calling on her old Selina Kyle performance, Meyers, the ever-charming Bon Jovi and the adorable Yeardley Smith, others weren't so lucky. Sofia Vergara comes off as little more than an accent with a pair of breasts, Russell Peters is just an accent, and Michele seems to be on hand only to sing. The film's mortal sin is wasting the talent it has on hand. Alyssa Milano may not be an A-lister, but she deserves more than to walk in, deliver a short line and walk out, never to be heard from again. 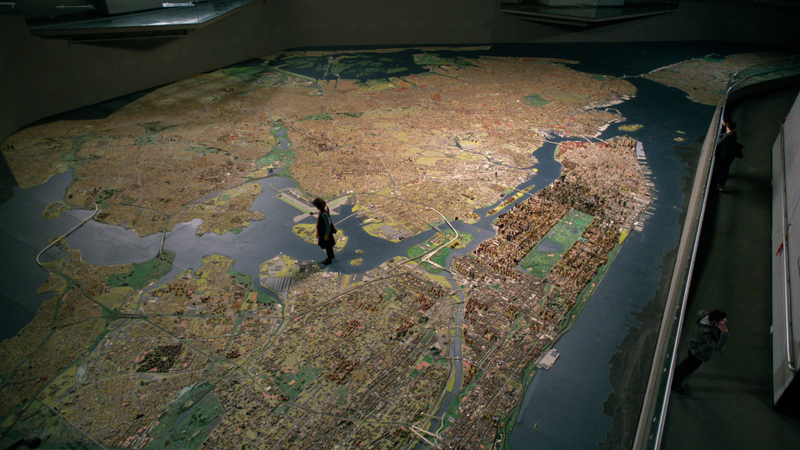 Perhaps it's my proximity to New York City (and its resulting exposure), but filling the screen with shot after shot of the town's iconic holiday sights doesn't impress me. Too often it felt like Marshall was just using the locations to invoke a sense of emotion rather than crafting it through the performances. The film's score and soundtrack is even more guilty of piling on the melodrama, guiding the film into schmaltz territory that the actors cannot overcome. For a supposed romantic comedy I caught one real laugh, and it was purely because it came from the fantastic Larry Miller. It got so bad that I felt like I wanted to care about what was happening, but it was just the polished presentation that was manipulating me. On the plus side, writer Katherine Fugate threw in a couple of cute curve balls at the end, avoiding what seemed like obvious resolutions to the remaining plotlines.

As I felt the movie winding to its end, I looked at the time remaining on my player. I was stunned to see there was still 50 minutes of film left to unfurl, and actually started to make up my own endings, which, though endlessly entertaining to me, would have resulted in a much different film. This is the movie's key problem, as it exists in a limbo between too much plot and not enough time. Paul Thomas Anderson's Magnolia worked as an intertwining collection of stories because, at three hours, there was enough time to spend with each character (it's also incredibly shot and brilliantly written, which sure helps.) The coincidences we're asked to accept in the name of making a cohesive film are over the top to the point where you might actually get frustrated by how neatly they tie things up.

A bit of trimming to remove the less interesting storylines, like Kutcher and Michele's cliched elevator imprisonment or Abigail Breslin and Sarah Jessica Parker's mother-daughter strife, and suddenly there's more time to develop the remaining characters. It also would help the audience build some emotional investment, rather than continually checking off each A-list appearance on their scorecard. 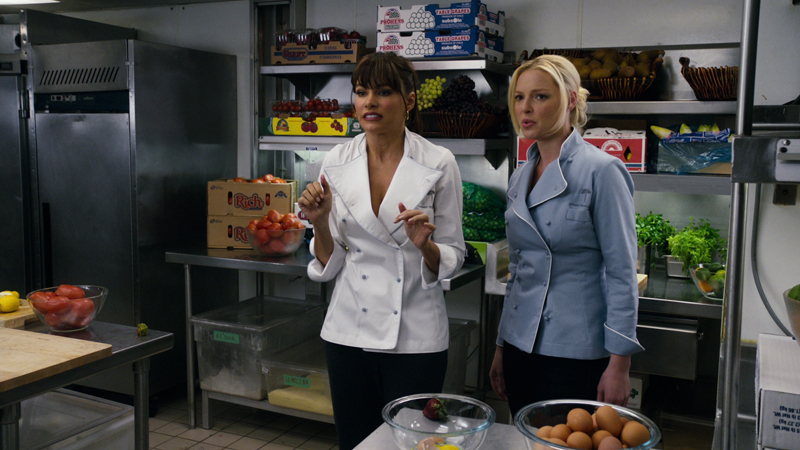 The Disc
This film arrives on a two-sided combo Blu-Ray/DVD in a standard Blu keepcase with a foil-embossed slipcover. The disc includes options to watch the film, select scenes, adjust the languages and check out the extras. Audio options include English 5.1 DTS-HD Master Audio, and French, Spanish and Portuguese Dolby Digital 5.1 tracks, while subtitles are available in English SDH, French, Spanish and Portuguese. Also in the pack is a code for a UltraViolet digital copy.

The Quality
Sporting a 1080p, AVC-encoded transfer, this Blu-ray looks as shiny and colorful as Times Square itself, delivering loads of fine detail everywhere, be it Grand Central Station or Radio City Music Hall, while the deep black levels look great in the New York City nights. The color palette could have been a bit richer, seemingly held back to create the cold blue wintery feel, but everything looks good, clear and crisp. Though the film is a touch soft and has a bit of grain evident, making it look like a good-old-fashion motion picture, digital distractions are kept to a minimum.

When the majority of the film focuses on one of the world's biggest public parties, one expects a bit of an overwhelming presentation in terms of sound. The Times Square in New Year's Eve might get a complaint from the neighbors, but it's not exactly a racket, making the crowd out to be more of a background to the movie than part of it. The soundtrack and score have a far more vocal role in the mix, playing right into their job of telling the audience exactly how to feel. Other than that complaint, the dialogue is clear and distortion-free (to the point where is feels like a separate element to the film) and the music is bold and strong. Naturally, with the atmospherics being kept to the background, the mix doesn't get a lot to do in the surrounds as far as an dynamism, but the strength of the music in your rear speakers will keep you more engaged than you might otherwise be.

The Extras
When I saw there was an audio commentary by Marshall, in my heart I was hoping it was actually Paul F. Tompkins. But even without PFT laying down the track it was still an entertaining listen. Grandpa Garry is a unique commentator, in that, in addition to telling stories from the set, he basically tells you what's happening on the screen. It's incredibly endearing listening to him talk about his actors, and you could imagine them being thoroughly embarrased by his plaudits, like any kid would when their elderly father boasts about them. Your mileage may vary, but it's a positive track through and through, with a lot of good info to go with the hand-holding.

There's a trio of featurettes, which are your traditional interview fests, a smart move when you have so many stars around. "The Magic of Times Square" (6:12) lets the cast and crew wax poetic about New Year's Eve's traditional home, while "New Year's Eve Secrets of the Stars" (6:14) gives them an opportunity to talk about their own traditions and New Year's celebrations. If you want to be jealous, keep track of how many spend their NYE in a vacation locale. The third featurette focuses on the film's two musical stars, Bon Jovi and Michele. Though they share a song in the film, they recorded it separate, and "Jon Bon Jovi and Lea Michele Rock New Year's Eve" (5:23) shows them at work, and gets thoughts from them, Marshall and producer Don Was on the song and the music in the movie. Though the first two are fluff pieces, the third gives some good insight into part of the film's production, and also shows the filming of an alternate take that really would have changed one of the storylines quite a bit.

Unfortunately, it's not included in the seventeen minutes of deleted scenes included (which is really nine minutes, but eight minutes of intros by Marshall, who is adorable, yet again.) Among the stuff found here are a couple more celebrities who were cut from the film and some faux man on the street interviews that were best left behind. Also cut from the film is much of what makes up the 11-minute wrap-party reel, labeled here as a gag reel. Though there are gags to be found, it serves mainly to illustrate just why these celebs would come together to work with Marshall, as it seems like the set was a place where good times were had. Sadly, this reel is funnier than anything in the movie. 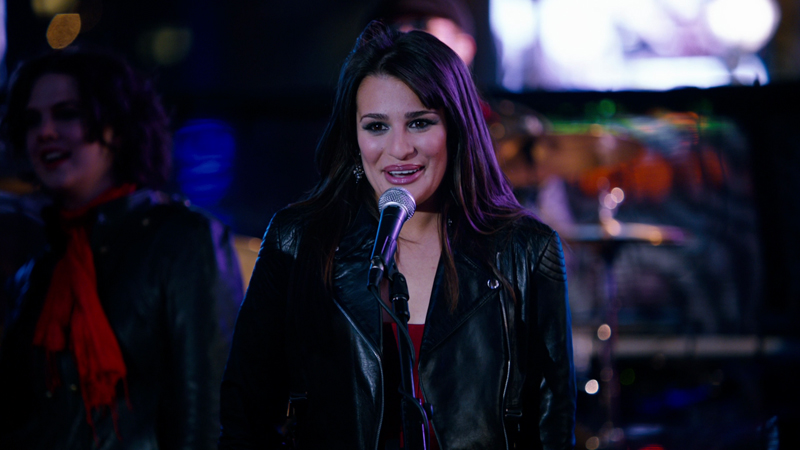 The Bottom Line
Though it's easy to smash Marshall for making a movie that gets by mainly on the recognition-factor of its star-studded cast, New Years Eve is really not a bad film. It's more of a non-film, an overstuffed collection of well-known faces strung together with excessive emotion and mostly weak gags. The Blu-ray looks and sounds fine, and offers a surprising amount of extras that hinge on your taste for Grandpa Garry. If you're looking for good filmmaking, look elsewhere, but if you look forward to the Golden Globes each year, this could be a new favorite spectacle.