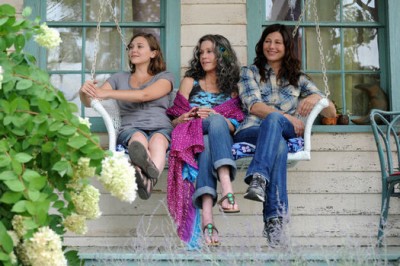 Jane Fonda's 1990 retirement from the screen to focus on family and causes was understandable if unfortunate; what's less clear is why she's had so much trouble, since coming out of that retirement, finding a vehicle that isn't terrible. She's made three domestic features over the past seven years: the screeching, insufferable Monster-in-Law, the unspeakably bad Georgia Rule, and now the trite and underwhelming Peace, Love, and Misunderstanding. In its broad strokes, it is oddly similar to its predecessor: another family comedy/drama, with three generations of a women coming together under one roof, where shenanigans and warming of hearts ensue. It's a better film than that one, but that's not saying much.

Fonda stars as Grace, a hippie legend ("Dylan had a thing for her!" we're told) who lives on a farmhouse in Woodstock, surrounded by chickens and marijuana plants and fellow flower children. The story begins with the arrival of her estranged daughter Diane (Catherine Keener), and her grandchildren Zoe (Elizabeth Olsen) and Jake (Nat Wolff); as Diane switches off the ignition, she announces to her children that she and their father are getting a divorce.

From the moment you contrast Diane's crisply tailored suits with Grace's peasant skirts, you can pretty well guess how it's going to go: Grace will rub off on her daughter, who will learn to wear her blue jeans again and will succumb to the charms of a sensitive singer/songwriter/carpenter (Jeffrey Dean Morgan). But their contrasts are comically overdone: Grace is a full-on, war-protesting, herbal-remedying, tie-dyed pot grower and dealer, while Diane is a Republican yuppie lawyer with a suitcase full of crispy folded blouses. The typing is too much, too easy--and that goes double for the trifecta of romances that blossom over their stay in Hippieland, pairing up each of the visitors with an obvious romantic interest.

Presumably sensing the transparency of their scheming, screenwriters Joseph Muszynski and Christina Mengert try to create obstructions, but there's not much in the way of subtlety in either the romantic or familial conflicts; the arguments, blow-ups, and snits are all surface affairs, staged for a few seconds of strife, then dispersed with a scene or two later via a one or two line apology. It creates a pattern for the picture that is downright tiresome: somebody says the wrong thing, somebody else blows up at them, a scene or two passes, and then one says, "sorry about blowing up at you," and they hug/kiss/whatever, until the next false crisis is manufactured solely for the sake of conflict. Young Jake is a would-be filmmaker, constantly behind his video camera to gather material for a supposed documentary (is this device over yet?), and his attempt to stage a fight between Zoe and her handsome suitor Cole (Chace Crawford) leads to this exchange:

Jake: "I just thought the conflict would be interesting!"

So the writers were aware of that idea, they just didn't apply it.

The entire film is pretty shallow, though--every scene has a bit to hit, which the script (and Bruce Beresford, who appears to have directed from a coma) bangs as quickly as possible before moving on immediately. Three romances, a divorce, an estrangement, Zoe's resentment of her mother: it's all piled on, but none of it is pursued with any depth. It's a film that goes to a buffet, loads up two full plates, and then barely nibbles on anything.

What dimension the film has is entirely provided by its performers (though it must be noted that poor Rosanna Arquette is so underutilized that I forgot, in the hour between her two scenes, that she was even in it). Keener is mostly on auto-pilot (though she's better half-there than most actors are when fully present), but Olsen is as likable and charming as ever, and Morgan's considerable warmth helps put across even the unbearably corny scene at a local music festival.

But this is Fonda's show, and she is able to play this role as more than the well-worn type it is because her historical baggage lends the character an immediate authenticity. The inevitable scene of her daughter perusing old photos gets an extra lift from how well we remember Fonda herself in that time, by the familiarity of those images--and she seems to be having a grand time playing a slightly altered, less famous version of herself. Resultantly, it's a giddy and high-spirited piece of work. Love her or hate her, this is an actor of tremendous gifts and cultural cache. If she can find another movie worth her time, watch out.