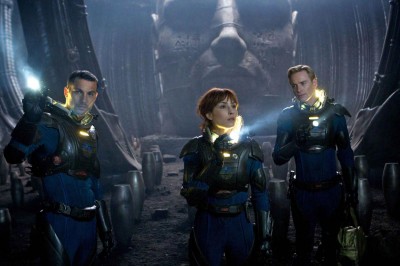 Howard Hawks famously said that a great movie is composed of three great scenes and no bad scenes. Prometheus gets the first part right. What we have here is less a bad film than a genuinely maddening one, which has sequences of tremendous skill and moments of keen promise. But it's such a mess. The characterizations are laughable, the plotting is befuddling, and the pseudo-intellectual posturing is window dressing--and shabby window dressing at that. Above all, director Ridley Scott's coy "it's not really a prequel to Alien, but maybe it is" doubletalk hides that it's the worst kind of rip-off, one which trades in the original (and far superior) 1979 picture's iconography while holding no responsibility to actually do anything compelling with it.

After an opening credit sequence of mountains and waterfalls that amounts to little more than a 3D show reel, we travel to Scotland, circa 2089. A pair of scientists, Elizabeth Shaw (Noomi Rapace) and Charlie Holloway (Logan Marshall-Green, doing his best Tom Hardy) discover a cave etching that is eerily similar to others they've found, all of which (they believe) are star maps pointing to an alien civilization that predated--and created--our own. Jump ahead four years, as the scientific exploratory vessel Prometheus is carrying the scientists and a crew to a possible origination point, under the watchful eye of Meredith Vickers (Charlize Theron), who works for the company that's bankrolling the expedition.

There are other characters, and because some of them are played by people we know--like Idris Elba, who plays the ship's captain, or Michael Fassbender, who is the android David--we can safely assume that they will make it further into the narrative than the unknowns who've been cast as the crew grunts. The ship lands on the alien planet, the crew goes exploring, and sure enough, a couple of bit players wander off on their own, to be quickly dispatched by scary, oogy alien beings (the picture shares the series' fascination with the ewy-gooey).

Scott stages this fist big kill as a giant whammy, with shock effects and pure genre thrills. It's a terrific, startling sequence, and there are a couple of others sprinkled throughout the film; Rapace has a solo scene in a piece of medical machinery that's both a killer set piece and a remarkable chunk of all-out acting bravado. But Scott is as impatient to get to those showcase sequences as his audience is; recall the leisurely opening passages of his Alien, of how much time was spent on the crew talking shit and blowing off steam, so that when their grisly demises arrived, we had some sense of who they were (and, thus, a reason to care). There's little of that here; we get some sense of Rapace's Shaw, but her scientist beau's characterization is fuzzy at best--I still haven't quite figured out why he suddenly turns into the ship's biggest asshole--and as talented an actor as Charlize Theron is, it's dubious that anyone could make anything out a character as perplexing and ill-motivated as hers. It says something important when the second most nuanced character in a movie is the robot.

Whatever problems are hinted at in the first hour or so are dwarfed by the third act, when the picture pretty much dives into the toilet: a major action beat is set up by Elba's character making a call so spectacularly stupid as to render the entire scene inexplicable (seriously, it's the kind of move any respectable horror movie would be mocked for, mercilessly), and the draggy ending soon reveals itself to be solely interested in cheap thrills--which renders the tendency of writers Jon Spaihts and Damon Lindelof (of Lost, which makes sense) to answer questions with more questions and pose riddles for the sake of themselves all the more exhausting.

Perhaps it's unfair to compare the muddled storytelling and herky-jerky pacing of Prometheus to the clean, B-movie efficiency of Alien, but damnit, Scott brought it on himself. And after all the breathless advanced guessing and prequel hype, it's hard to pin down exactly how much Alien there really is, within the movie proper anyway--the only explicit connection comes at the very end, between the actual conclusion of the narrative and the closing credits, with a short, perfunctory scene that this viewer found infuriating in its shamelessness. That moment aside, there are minor structural similarities, and the title and mission fonts repeat, but that's about it. Scott is just sounding echoes and leaning on shorthand, hoping that viewers will be too busy playing connect-the-dots to be bothered by the basic, fundamental flaws of what he's created this time around.