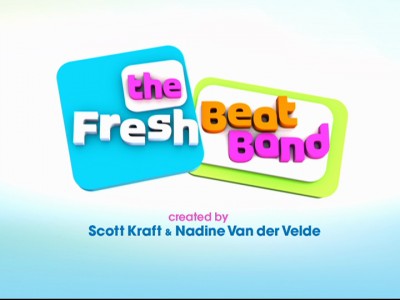 
The Show
The music-focused shows on Nickelodeon tend to be their strongest, and are definitely my daughter's favorites, as she loves to sing along to their pop-heavy soundtracks. Unfortunately, her favorite (and mine), the indie music-tinged Jack's Big Music Show, was not long for this world, and nothing's quite filled that void. The closest they've come is The Fresh Beat Band, starring a quartet of music-playing youngsters who get into a variety of adventures in-between singing songs and breaking out some terrible puns.

Unlike many other kids music shows about bands, like say, The Wiggles, the Fresh Beat Band's music is a bit more complex, blending in hip-hop with their overwhelmingly poppy sound, resulting in catchy tunes like "Go Bananas" and "We Had a Great Day," the wrap-up song that caps off each episode. If you've ever had to sit through "Big Red Car" for a sixth, seventh, or perhaps 80th time, and you'll quickly come to appreciate the value of good pop song, and this series offers them up again and again, keeping things moving between the bits of sitcom comedy and pleasantly rare "lessons." 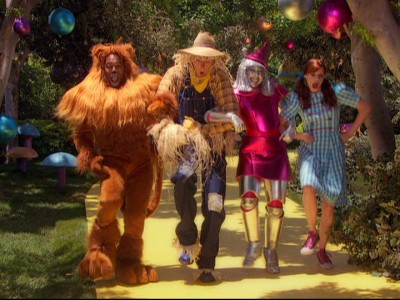 While the regular episodes run around 20 minutes in length, "The Wizard of Song" is a legitimate feature-length film, casting the four members of the Fresh Beat Band in a re-telling of the classic Wizard of Oz story. The group's drummer, Marina, can't focus on the group's rehearsal before a big show, and runs off to get a snack, but gets caught in a windstorm that lands her in a distant land with witches and seemingly no way to return home. But a wizard may be of help, to her and the friends she meets along the way, including a scarecrow in need of a brain, a tin violinist who can't play with emotion and a lion lacking a backbone. Together, they travel to visit the wizard (played by Jason Mraz.)

Everything pretty much plays out the way anyone with knowledge of the story knows, just with those Fresh Beat Band touches, like the catchy songs, including an adapted version of Mraz' hit "I'm Yours," and familiar faces playing dual roles in reality and beyond. While anyone with a working knowledge of Judy Garland will find little new of value in this presentation, for little ones, it's not a bad entry way into the myth, and as the iconic friends of Dorothy, Twist (Jon Beavers), Shout (Thomas Hobson) and Kiki (Yvette Gonzales-Nacer) all do a good job, particularly Beavers and Hobson, who have fun taking their parts to the edge of camp, with Beavers' Jimmy Stewart impersonation coming off as particularly inspired.

Here's the thing about this movie. It features Tara Perry as Marina, the band's red-headed percussionist. I have nothing personally against Ms. Perry and she's a talented dancer, but she was slid in as Marina after Shayna Rose, the original Marina, left the show to persue other opportunities. There's something about just substituting one actor for another with no explanation (the ol' York/Sargent Maneuver) that puts the replacement in a bad place from the beginning, and Perry pales in comparison to the perky Rose. All the y had to do was give her a different color combination and she could have been a fine addition to the show, but instead, she's just a substitute drummer. 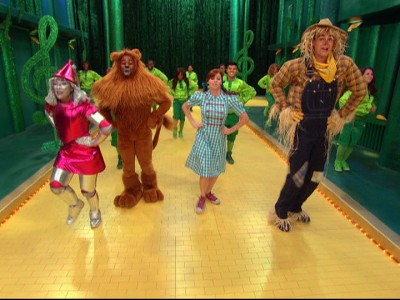 The DVD
In slipcover-wrapped standard keepcase, this DVD offers up the feature-length movie and two bonus episodes. The disc has a static, full-frame menu, with options to play all the episodes, select shows and check out the extras (on the second disc.) There are no audio options and no subtitles, though closed captioning is included.

The Quality
Come on Nickelodeon. Why do you continue to deliver sub-par video quality in a world loaded with low-cost, high-quality displays? It's bad enough when you put pillarboxed widescreen transfers on your iCarly DVDs, but cropping this widescreen film into a full-frame presentation is unacceptable and brings back bad memories of pan-and-scan. It's pretty obvious the movie was composed for a widescreen image, and this disc cuts off characters and makes frames look cramped. While the color and fine detail are excellent throughout (black levels may as well be non-existent, considering how sunny and bright the film is) and there are no issues with artifacts, the cropping is egregious.

The audio is delivered via a Dolby Digital 2.0 track that's crisp and clean, balancing the sound evenly, with nice, strong music (as you'd expect from a series like this.) Nothing particularly negative about the audio, but there's nothing deserving of a lot of praise either.

The Extras
In addition to the movie, there are two bonus episodes of The Fresh Beat Band, "Ghost Band" and "Chimps in Charge." "Ghost Band" sees the group take on a band of apparitions in a western ghost town, while the other episode follows the gang's misadventures while babysitting for a pair of chimps. They are enjoyable enough, and feature some of the show's best songs, including "Stomp the House." 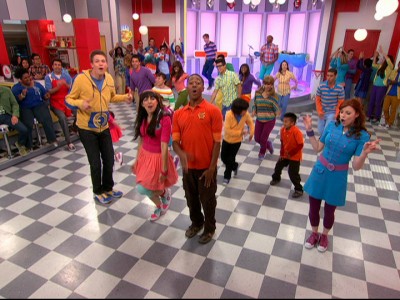 The Bottom Line
The Fresh Beat Band is no Jack's Big Music Show, but there are a lot worse options out there for kids, and the music is very catchy and melodically complex enough to keep from boring adults watching. When it comes to the DVD, you're getting more content than the usual Nickelodeon disc, but the pickings are still slim in terms of extras and the visual presentation is more frustrating than usual. Considering you can get a full season of the show on on-demand DVDs (with the real Marina) for a few bucks more, there are better ways to spend your cash.