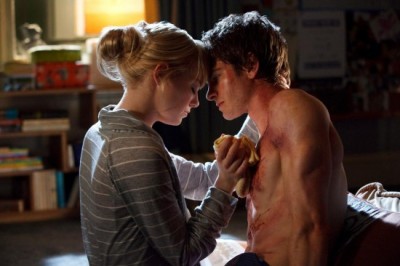 Seldom has a major summer blockbuster been as pungent with the odor of being assembled by committee as Marc Webb's The Amazing Spider-Man, a movie that slams between great moments and unwatchable scenes with enough force to give the casual viewer whiplash. Three separate screenwriters are credited, but many more reportedly contributed, and you can tell--there's no clear voice, no narrative momentum, and most importantly, no real reason for the movie to exist at all. It is the origin story of how Peter Parker became Spider-Man, which is a story that we were all told a mere decade ago in Sam Raimi's original (and superior) Spider-Man; one of those three screenwriters is Alvin Sargent, who (weirdly enough) wrote Spider-Man 2 and co-wrote Spider-Man 3. And Spider-Man 3's poor reception is supposedly the reason they did this reboot in the first place, so why was the same guy hired again? What the hell kinda con game are these people running?

Webb, who helmed (500) Days of Summer, gives us a Parker clad in hoodies, carrying a skateboard and an old-school film-only camera--in other words, it is the hipster Spider-Man we were fearing. (In one particularly unfortunate sequence, he practices both his skateboarding and his web-slinging to the strains of Coldplay's "Til Kingdom Come." That's a good time to run out for a soda refill.) This time around, Peter (Andrew Garfield) is haunted by the abandonment of his scientist father, and Uncle Ben (Martin Sheen) and Aunt May (Sally Field) look on with worry as he becomes intrigued by his dad's old partner, Dr. Curt Connors (Rhys Ifans). On a visit to Dr. Connors's lab, Peter inexplicably walks right into an active experiment, is stung by a spider, gets his heightened senses, you know the rest.

There is one reason to seek out The Amazing Spider-Man, and that's Emma Stone, who plays love interest Gwen Stacy with a twinkle in her eye and a dazzling array of knee-socks on her legs. She and Garfield's chemistry is bananas--their two-scenes zing and fizz, and the scene where he tells her exactly who he is has a palpable and welcome erotic tinge. She gets a little charge from knowing, and from being the only one who does, and Stone conveys that excitement in a fashion that is thrilling to watch. She raises the stakes of every scene she's in; she's so utterly present and alive on screen, so absolutely in each moment, that it feels like anything can happen. Her electricity makes Garfield better as well; he struggles elsewhere, saddled with too many "Wahoo" and "Yippee" lines while in flight, to say nothing of his terrible "jokes" (low point: a Midnight Cowboy-style "Watch out, I'm swingin' here!" Three screenwriters, keep in mind).

Still, Stone's aren't the only good scenes. Peter becomes aware of his newly sharp senses in a subway fight scene that makes a nice, smooth transition from action to slapstick, and there is a sweaty, almost Cronenbergian quality to the section where he's trying to figure out what on earth is happening to him. The joy of humiliating the school bully is amusingly dramatized, and the flying sequences are mostly exciting (Webb uses a kind of "Spidey-cam" POV shot sparingly but effectively). And all of the performances are good, really--Denis Leary (as Stone's dad, and a police captain chasing her beau) gets off a few wry line readings, while Sheen and Field make a fine pair of surrogate parents.

But for every moment that works, there's three that land with a thud or a scratch of the head. When Peter meets Dr. Connors, he dazzles him with information he got from a two-minute Web search--none of the other (presumably ambitious) interns bothered to Google this guy? How exactly does Peter get back in the lab building after he and the doctor are on the outs? Are we really to believe that he gets the idea to fight crime in a mask by landing hard on a roof that collapses into a wrestling ring? That moment feels like what it is: a lazy way to swipe the idea from the 2002 Raimi film without having to do it all over again.

Then again, too much of the picture is just that: doing it all over again. As we watch Uncle Ben sacrificed for Peter's smug inaction, you can't help but wonder why we're seeing this familiar reenactment. Sure, the little details are different, here and throughout, but don't kid yourself: this is the same movie we saw ten years ago, and if you'd like to watch it again, that DVD on your shelf is a lot cheaper than a trip to the multiplex.