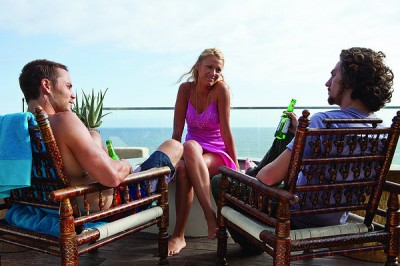 I call dibs on the phrase "torture noir."

When I was exiting the screening of Savages, I was asked what I thought of the movie by the guy whose job it is to be there to ask such things. The first thing that came to mind was, "That movie was vile."

I'm certainly no puritan, and I love my fair share of antiheroes, but all of the characters in Savages are just "anti." Anti nothing in particular. "Anti-everything," as the Britpop band Mansun once sang, "love him and hate him both at the same time. I care for nothing, lives at the bottom of your strung-out conscience." Abstract lyricism for a film that is baldly empty, all surface and no substance.

Savages is the latest from Oliver Stone, a once vital filmmaker whose career has hit the skids in the 21st Century. Can you name a film he made in the last 12 years? If so, do you really care one way or the other about said film? Alexander, World Trade Center, W., Wall Street: Money Never Sleeps: all competent, vaguely interesting films that fail to really distinguish themselves one way or the other. Audiences could take them or leave them, and they mostly left them.

With this in mind, Savages seems like Oliver Stone's bid to show he's still relevant. It's the work of an aging artist desperate to prove that he's "edgy," a fake tag that only gets applied with any real seriousness by people who are anything but. It's like hearing a fashion designer describe his or her own work as "rock 'n' roll;" the clothes make it look like they haven't been to a true rock show in eons. What Stone is trying to do is take a down-and-dirty crime story and have a little cake and eat it, too. Savages makes a pretense of being an old-style B-movie--all those posters of classic horror films don't litter the background for nothing--but infused with a new millennium nihilism. It's slickly made, with bravura camera work and an audacious sense of visual storytelling, and yet it perambulates around the edge of the abyss without ever peering into the darkness in any meaningful way. Savages is like a film made by someone who saw Natural Born Killers and tried to rip off its aesthetic, but without the guts to really go for it, leaving behind all the social and media commentary that made that film such an unnerving delight. That both are made by the same director is just sad. 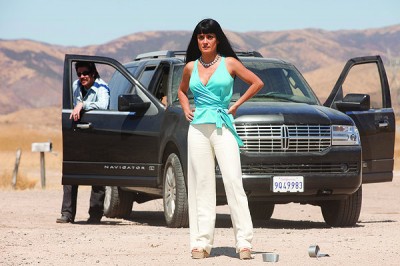 Not that it's really worth describing the story, but Savages is essentially a crime movie about a turf war. Two independent dope dealers, Ben and Chon (Aaron Johnson from Kick-Ass and Taylor Kitsch, rounding out a bad year after John Carter and Battleship) have taken over Southern California with their homegrown product. Ben is a social activist, while Chon is a veteran of Iraq and Afghanistan, making a classic brains and brawn combo. Or as the movie puts it, Chon is for fucking, and Ben is for making love. These two hedonistic Adonii live by the beach with their shared girlfriend, the ridiculously named Ophelia Sage (Gossip Girl's Blake Lively). They call her "O," which I can only guess is another of Stone's many strained literary allusions (he owes Shakespeare a hefty royalty check or an apology--probably both). O narrates the movie, giving us her "sage" wisdom. It's her story. "The Story of O." Get it?

Warring drug cartels see lots of cash in Ben and Chon's territory, and they want to move in. When the boys prove too smart for their own good, the head of one cartel, Elena (Salma Hayek), sends her heavy, Lado (Benicio Del Toro), to take the one thing the guys love as leverage. Lado kidnaps O, and though the dudes pretend to roll over, they start coming up with improbable schemes to get their sexy pal back and screw over their new boss. A series of double crosses ensue, involving Lado, rival gangs, and a DEA agent on the take (John Travolta, looking more and more like H.R. Puffinstuff as the years pass). Travolta and Del Toro have one scene together, and it's tremendous fun, hinting at the kind of tongue-in-cheek, cagey thriller Stone and his screenwriting duo, Shane Salerno (the Shaft remake) and Don Winslow (who also wrote the book they are adapting here), would like to think they are making. Alas, it's merely an oasis in an otherwise dire wasteland of incomprehensible boredom. 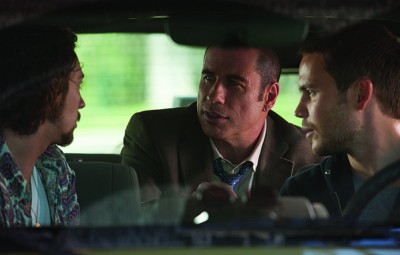 Which, when it's all said and done, is the worst thing I can say about Savages: I was bored. Forget the wooden acting from the male leads, and that neither of them is cool or stylish or even remotely interesting. Forget the hippy-dippy narration from Lively (who is otherwise fine, she just seems to have a problem reading aloud). Even forget the stomach-churning scenes of gratuitous violence, which include beheadings and a drug lawyer being horsewhipped until one of his eyes is hanging out of his socket, and then spending the rest of the scene with that eye dangling from his cheek. Those are all symptoms of the larger disease. Savages is a shallow, empty, soulless film about people whom you would actually rather see fail than succeed doing terrible things to each other all to earn the privilege to go on doing terrible things. Ben and Chon may be doing it for love, but their capacity for understanding actual emotion is only slightly more substantial than their claims at being spiritual. Which is to say, not at all. Quote Buddha and the Dalai Lama all you want. I dropped out of college, too, I get it.

Savages is meant to be provocative and dangerous, but it's a sham. It says nothing about the war on drugs, or about violence in our culture, or even about one individual's capacity for bad choices and his or her atonement for the same. Savages is the cynical concoction of over-the-hill, one-time rebels trying to prove they are down with the kids and only end up appropriating what they think is the "new school" in the same desperate manner as any other commercial or corporate concern after the disposable income of the young. 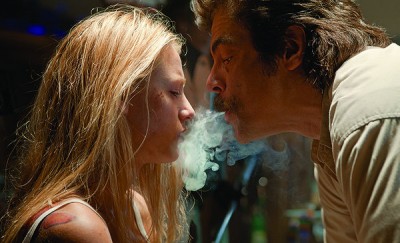