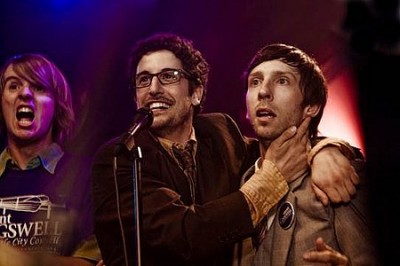 Grassroots is a sneakily engaging shaggy-dog of a movie, a wonky political procedural in odd-couple comedy's clothing with an affection for its characters that's rather infectious. Director Stephen Gyllenhaal (yes, of those Gyllenhaals--he's their dad) adapts Phil Campbell's book--the picture opens with the irresistible disclaimer "Most of this is true"--about how he ran an honest-to-God grassroots campaign, in which a Seattle loose cannon named Grant Cosgswell mounted a basically single-issue challenge to a longtime City Council member. The issue was mass transit, but as Cogswell says, "Mass transit is social justice."

Campell is portrayed by Jason Biggs, Cogswell by Joel David Moore, and the duo start out with a workable straight guy/nutty buddy dynamic. When Cogswell decides to run, he's basically a man unhinged, working off pure rage against the machine of city politics; he's prone to tempter tantrums, awkward speeches, and streams of imaginative profanity. But the film watches closely as Cogswell clumsily find his voice, style, and message; Gyllenhaal's keen eye for observation (and restrained use of subtle handheld cameras) gives the film a documentary-style intimacy.

The film is at its best when exploring the intricacies of campaigning, which Campbell--a journalist who becomes a strategist on something of a desperate whim--picks up via his own bluffing and the advice of political reporter Jim Tripp (nicely played by Christopher McDonald, who wears his cynical wisdom as comfortably as a rumpled old suit). Cogswell's story is initially played for laughs, but the campaign's stakes-raising is matched by the film's, and the picture gets surprisingly nuanced and complicated in its second hour--a timely turn, considering the conversations we've been having for a couple of years now about the difference between running on idealism and governing with it.

But when the script (adapted by Gyllenhaal and Justin Rhodes) veers from the campaign trail, the momentum stumbles. Lauren Ambrose is given the thankless task of playing Phil's exasperated girlfriend, and the unfortunately pat nature of the character makes her scenes more of a slog than they have any right to be, considering that they feature Lauren Ambrose and all. And the business concerning his rebound with Cobie Smulders is arbitrary and half-hearted, not to mention a waste of a perfectly good Cobie Smulders. Yes, personal lives take a toll during intense and close campaigns, but these scenes have been done before, and better.

Because the story is set during the 2001 campaign, it takes a detour into 9/11 remembrance--tricky territory that's ultimately a bit of a wash. Gyllenhaal dramatizes the experience of watching New York, helpless, from a distance, in a way that is true and powerful. But Cogswell's big post-9/11 speech doesn't work, and it's hard to pinpoint why, except that in some indeterminate way, it moves from gut-felt emotion to clichéd platitudes in a rather unappealing way.

Still, Grassroots is a likable movie with some ideas on its mind, and charismatic performers at its fore. Moore has been in so many bad movies that it's tempting to think he's a bad performer, and in early scenes, a little of him goes a long way. But this is a controlled and well-modulated performance, and he grows on you. The skill of Biggs's performance makes his recent return to the American Pie series all the more depressing--this is a solid actor, who reveals his character's edge and dimension slowly and subtly. Grassroots is a modest movie, but a smart and well-crafted one nonetheless.