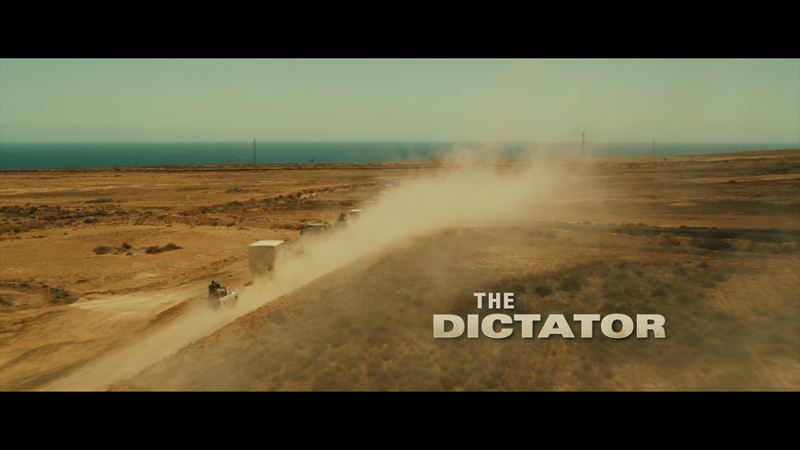 
The Movie
When Sacha Baron Cohen was making a name for himself, he was doing it under other names, be it his hip-hop moron Ali G., his eastern European dimbulb Borat or his Austrian fashionista Bruno, all of whom would capture people being themselves on camera, and craft laughs from their real, and frequently ignorant reactions. However, with increased fame, it's harder for Cohen to catch people unaware, and the lawsuits from those caught being themselves has to make the work less rewarding in more ways than one. So for his next satire, he went the scripted route, which risked exposing him as a one-trick pony, especially since his first "character" film, Ali G indahouse wasn't close to as entertaining as its "reality" follow-ups.

Perhaps it's just a matter of the character, as Admiral General Aladeen is a far more interesting fellow than his do-rag wearing Ali G., in large part due to the innocence Cohen injects him with. The dictator of the northern African country of Wadiya, Aladeen is the last of a literally dying breed, as his totalitarian compatriots around the world, like Kim Jong Il and Muammar Gaddafi, meet their ends. Then, when the UN calls him on the carpet in New York, he finds himself caught in a plot to overthrow his leadership, and ends up a man without a country (or clothes.) With his kingdom about to be taken from him and turned into a democracy, he has only days to stop the plan, and the only help he has is a radical liberal shopkeeper named Zoey (Anna Faris) and Nadal (Jason Mantzoukas) a defected scientist Aladeen thought he had had executed. 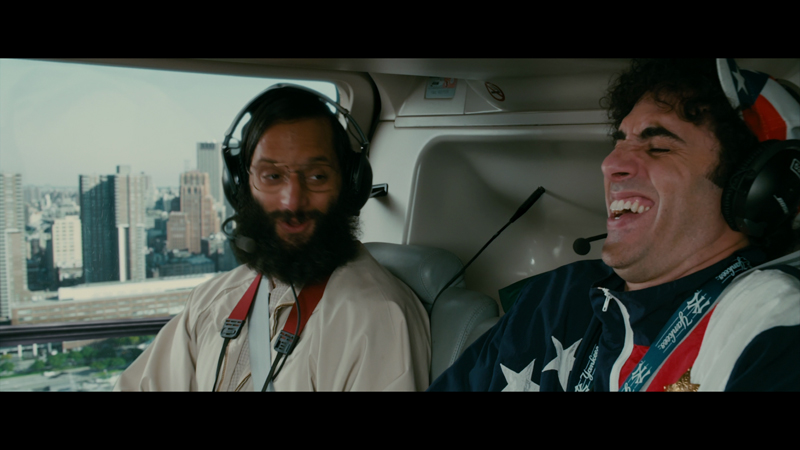 Though the film is a strong satire of international politics, with a particularly biting criticism of America toward the end, the joy of The Dictator is in the film's screwball nature. Because Aladeen has never been told no and wielded unlimited power in an unenlightened culture, he doesn't know how to behave in a free society like that found in New York City, which sets up any number of conflicts between himself and pretty much everyone else, especially Zoey. Faris' granola-flavored character is a full-bore liberal parody, and between the two of them, basically anything can be made fun of. It may be low-hanging fruit, but nonetheless.

Nothing is funnier though than the give and take between Cohen and Mantzoukas, which creates lengthy, ridiculous runs that are the funniest moments the movie has to offer, reminiscent of the classic comedy duos. The great thing is there is no going too far, as seen in a scene where the pair go on a helicopter sightseeing trip with a Midwestern couple, and their foreign language is misunderstood for a terror threat. At first, the coincidences the couple overhears are reasonable, but then, they are done simply to create the misunderstandings, which is hysterical. It would be great to see these two paired again in the future.

If having Cohen and Mantzoukas wasn't enough to tip the comedy scales, The Dictator is loaded with some of the highest-profile blink and you'll miss them cameos in recent history. While Chris Parnell, Jessica St. Clair, Fred Armisen, Nasim Pedrad and John C. Reilly all get their moments and Seth Morris and Kathryn Hahn have a memorable scene as a couple going into labor in Zoey's store, keep an eye out for Chris Elliot, Gary Shandling, Edward Norton and Horatio Sanz, who have one line combined, at least in the theatrical cut. Speaking of which, it's worth it to watch the unrated edition, which runs a full 15 minutes longer, and includes more of Cohen and Mantzoukas (along with other extended runs), as well as a character surprisingly cut entirely from the theatrical edition. Not to give anything away, but Aladeen has an exceedingly gifted member of his virgin guard who gets into a massive, obscene and ridiculous fight scene. I can't help but think that if it had been shown in theaters, it would be the only thing people would have been talking about. 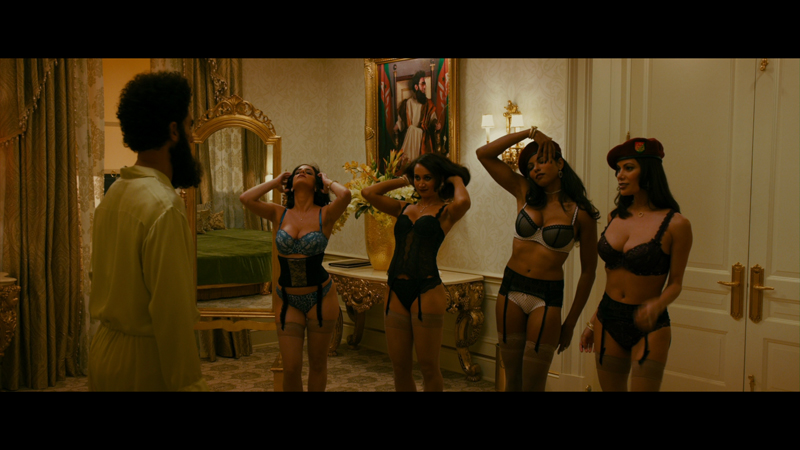 The Discs
The film arrives in a two-disc set, with a Blu-Ray and DVD, which are packed in a standard-width dual-hubbed Blu-Ray keepcase (in an embossed slipcover.) The Blu-Ray has a static menu, with options to watch the film, select scenes, adjust the set-up and check out the extras. Audio options include English DTS-HD Master Audio 5.1, English Dolby Digital 2.0 Descriptive Video Service, and Dolby Digital 5.1 French, Spanish and Portuguese tracks, while subtitles are available in English, English SDH, French, Spanish and Portuguese. (For the unrated cut, only an Engish DTS-HD Master Audio 5.1 track is available to listen to.)

The Quality
The 1080p, AVC-encoded 2.40:1 transfer looks good from top to bottom, shining in terms of the level of fine detail and the richness of the colors, an element you'll quickly notice in any of Aladeen's opulent residences. Taking place mainly in New York, the film is loaded with production value, and the presentation shows that, especially in the nighttime scenes, where the city's iconic skylines come off impressively, with little to no issues with digital distractions, and deep black levels.

The DTS-HD Master Audio 5.1 soundtrack doesn't offer any kind of test for your receiver, but the movie doesn't really demand that kind of audio. You get clean, crisp dialogue in the center channel, which the side and rear speakers get to handle the film's fun Wadiyan versions of pop songs and some atmospheric effects, along with the occasional sound effect during the film's rare action scenes. Most of the film is about talking, and the movie does right by that element.

The Extras
The big extra is a pack of 15 deleted or extended scenes, which run about 34 minutes in all. Much of this footage has been integrated into the unrated cut of the film, though there are a few minor moments only found here. After watching the alternate version of the film, this isn't all that great, because you've seen so much of it.

A short clip (1:35) of a music video for Aladeen's "Your Money is On The Dresser," shown following another of his awards, was cut from the film for good reason, as it's not that funny. There's also more from the Larry King interview in the unrated cut (2:49) which is OK, but nothing special. It's just curious when they shot this, as it mentions the Oscars kerfuffle with Ryan Seacrest, which would seem to mean it was shot after the film was finished. Overall, it's a lackluster collection of bonus content, and the inclusion of an Ultraviolet digital copy doesn't make up for it. 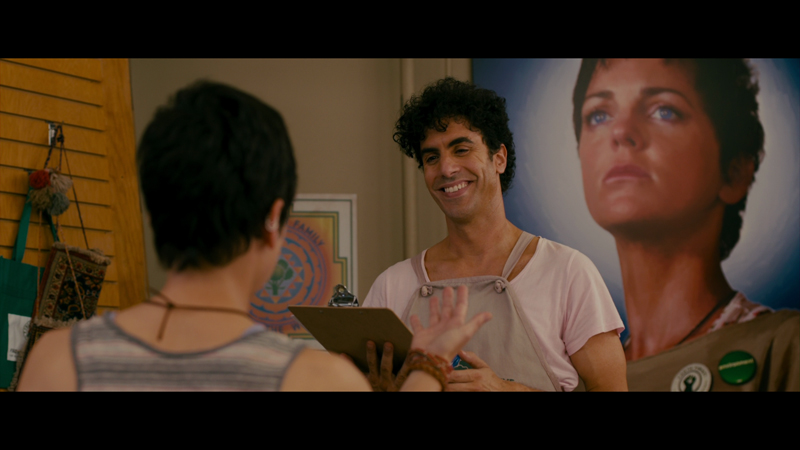 The Bottom Line
Cohen remains an incredibly talented satirist, though one willing to err on the side of the scatological, and The Dictator shows both sides of his comic skill. While it's not as sharp as Borat, it's far more entertaining than Bruno, and shows that Cohen doesn't need unwitting dullards to be funny. The presentation is solid all around, but the extras certainly could have been better, especially since most of them are duplicated in the alternate cut of the film, which is the way to go if it's your first time with the Admiral General.