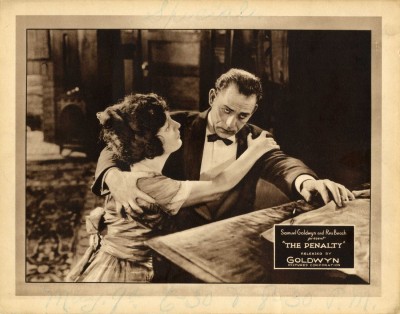 Legend has it that audiences in the early 1920s were so convinced by the double-amputee special effect in the Lon Chaney vehicle The Penalty that the studio started attaching a scene of the actor walking down some stairs to the tail end of prints so people could see that the beloved actor still had his legs. While it would be easy to guffaw and chortle at how naïve movie audiences were once upon a time, if you've actually seen The Penalty, you will know that this is not so far fetched. Chaney legitimately looks like he has had his legs cut off at the knees. The optical illusion is flawless. (Also, given the number of people who have fallen for "found footage" movies like The Blair Witch Project and Paranormal Activity, the high horse of our modern age is really just a digitally altered pony.)

Chaney stars in The Penalty as Blizzard, a criminal mastermind who runs the San Francisco underground. As a boy, Blizzard had both of his legs cut off due to a medical misdiagnosis, and his anger over his mistreatment has driven Blizzard to seek revenge on the doctor responsible (Charles Clary). To ruin the man he knows ruined him, Blizzard has amassed an army of thieves and murderers and bidden his time waiting for an opportunity to strike. That opportunity arises when word comes that Dr. Ferris' daughter Barbara (Claire Adams, The Big Parade) is looking for a model for her bid for artistic greatness. She wants to do a sculpture of Satan after his fall to Earth, and she needs a man who looks like devil. Blizzard volunteers.

Meanwhile, the police are moving in on the gangster. They have sent an undercover agent to infiltrate Blizzard's sweatshop and find out everything he has planned. Blizzard takes a liking to Rose (Ethel Grey Terry, Intolerance), which allows the cop to get closer. She sits under the piano and mans the foot pedals while he plays!

The Penalty is directed by Wallace Worsley, who helmed 29 films, many with Lon Chaney, including the 1923 version of The Hunchback of Notre Dame. It's a fairly gripping potboiler, with a strong cast of interesting characters and several salacious subplots. The multi-tiered story, based on a novel by Gouveneur Morris, has some clever conceits, including hidden passageways, union busting, and more selfishly sinister motivations that carry even the most minor characters through to the film's climax. For the most part, however, The Penalty is dependent on the charisma of Lon Chaney. His performance is a deftly drawn portrait in malevolence. Some of the most intense moments of the movie are when Chaney is merely mugging for the camera, contemplating the pain and rage that has driven his life, doing his best imitation of Satan. It's a great example of what the more accomplished silent film actors could do with the medium, playing whole scenes on their own with the most basic of tools. It's an extremely physical performance, one that goes beyond facial expression. How Chaney carries himself, how he moves--the chameleonic actor doesn't go in for faking it. Sure, you can make out some of the technique if you watch carefully, guessing when maybe his legs are hidden under the floor or catch a slight bulge in his coat, but you really have to try. Show The Penalty to someone who has no idea who Lon Chaney is, and they'd never doubt the authenticity of the performance for a second.

The plot of The Penalty intensifies the personal drama at a consistent rate. Blizzard becomes more seductive the more wretched he reveals himself to be, which is also offset by Claire Adams' sweet rendering of Barbara. She provides some tenderness in the crook's life. The only other respite the savage beast finds is at his piano. (One of the title cards declares, "I can murder anything but music!" Even silent films sometimes have great lines.) Worsley builds it all to a nerve-wracking tension, only to ultimately disappoint. The film's emotional climax undoes everything, opting to give Blizzard a hurried shot at redemption rather than letting him indulge his base desires. This makes way for the standard ironic "crime doesn't pay" comeuppance, which at least packs some of the cynical punch the earlier portions of the film promised. The about-face is disappointing, but not enough to ruin The Penalty, which otherwise crackles with a nefarious energy. 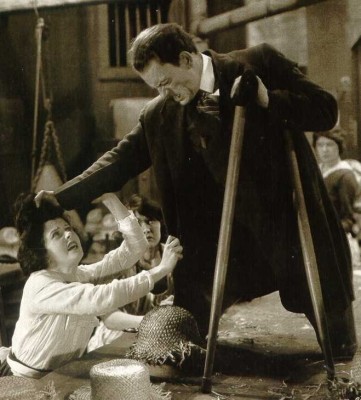 Video:
The new HD master, taken from a 35mm restoration undertaken by the George Eastman House Motion Picture department, is breathtaking. The level of clarity is astonishing, with only minor appearances of scratches or dirt. The resolution is strong throughout, revealing a nice level of detail. The version here is shown in the original 1.33:1 aspect ratio, preserving what is presumably the original tints for the different scenes. The Penalty looks incredible in HD, with nice contrast and lots of gorgeous detail

Sound:
The Mont Alto Motion Picture Orchestra has contributed a new score to this edition of The Penalty, and viewers have the choice of a 5.1 DTS-HD Master Audio mix or a 2.0 Stereo mix. Both sound good, but the more complex mix gives nice depth to the musical accompaniment, creating a more immersive viewing experience.

Extras:
The Penalty is packaged in a standard Blu-Ray case with a cardboard slipcover.

A 9-and-a-half-minute video feature leads the bonuses, showing us Chaney's make-up case, his dummy for testing out his make-up effects, and the costume for Blizzard in The Penalty.

An unremarkable 1914 silent Western called By the Sun's Rays is also included. It's a short cowboys-and-robbers picture (just over 11 minutes), featuring Lon Chaney in a crucial role as a bad guy. The print has seen better days, and it will make you appreciate even more the restoration job done on The Penalty. Alongside this, we get trailers for two other Chaney movies, The Big City and While the City Sleeps.

Finally, we get the only surviving footage of Lon Chaney's 1919 hit, The Miracle Man. There is under three minutes of material from the lost drama of religious con men here, and it appears to be taken from some kind of promo package, as it is accompanied by narration detailing the film's plot.

FINAL THOUGHTS:
Highly Recommended. This pulpy 1920 silent drama stars Lon Chaney in a remarkably diabolical role as a criminal mastermind that also happens to be a double amputee. The Penalty is notable for the excellent and painstaking effects work hiding the lower halves of Chaney's legs, but it's also got a pretty good story and some nice work from the female supporting cast, who give the dark material its heart. The final act of the film takes some disappointing turns, but The Penalty is still very much worth seeing, particularly in this format. The restoration is amazing. 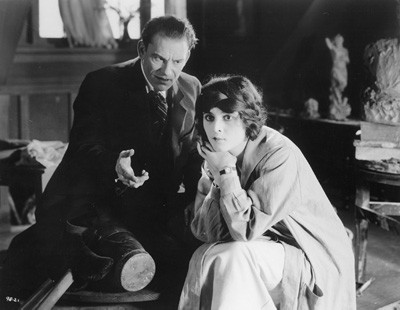