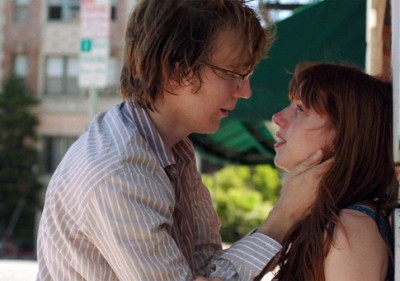 When Harry (Chris Messina) reads the first section of the new novel by his brother Calvin (Paul Dano), he has one critique. But it's a big one: he doesn't believe Ruby, the primary female character. "Quirky, messy women whose problems only make them endearing are not real," he insists, and the more knowing audience members will smile, because Calvin has written a Manic Pixie Dreamgirl. It's probably fair to assume that Zoe Kazan, the adorable young actress who plays Ruby (and who wrote this screenplay) has been offered her fair share of MPDs, most of them presumably written by men not unlike Calvin. For a while, Ruby Sparks promises to be less the contribution to the subgenre that its ads suggest, and more a commentary/critique of it. Disappointingly, this angle is teased but mostly dropped, leaving us with a markedly less interesting gimmick rom-com about a writer who creates the girls of his dreams, and must contend with her.

Calvin is a frustrated writer in the neighborhood of 30 who has yet to top his teen prodigy debut. One night, in a dream, Ruby appears to him, and he finds himself not only clearing away his writer's block, but spending all of his time at his typewriter (they must always have a typewriter, these movie novelists) in order to, in a strange way that he's not quite comfortable admitting, "spend more time with her." And then, one day, there she is in his kitchen. Understandably, he freaks out. "I'm just having trouble wrapping my head around the reality of the situation," he explains, in what may be the understatement of the year.

His brother first thinks he's crazy (and you can't blame him), and then can't believe Calvin's luck; he has a beautiful girl who will literally do whatever he wants. There's a great scene where they go up to his typewriter to try it out, marveling as Ruby suddenly speaks fluent French, because Calvin writes that she does. Harry sees this is a golden opportunity, but Calvin, the romantic, vows to stop writing the book and just be with Ruby. And that works for a while. But Kazan's script nicely captures the slow-motion drift that can occur even in an idealized relationship, and how the niggling feeling of Ruby slipping away leads him back to the typewriter. But it's not as easy as that, and it seems the more he tries to compensate, the more he screws it up. So it's like most relationships.

Dano is not always the most engaging leading man, but this is a decent role for him; it doesn't presume (as some of his lesser vehicles do) that his mopey twitchiness makes him more appealing. Kazan has written herself a role that lets her work a number of different moods, all of them entertainingly; the stretch where Calvin's rewrites render her comically needy is particularly funny. Messina's reactions are comic gold ("Stranger things have happened," Calvin insists, to which Harry replies "I don't think so!"), and Elliot Gould is deliciously Elliot Gould-like. Annette Bening is clearly having a ball playing Calvin's New-Agey mom, and while she and Antonio Banderas (as her new lover) are underutilized, they're awfully good together.

Directors Jonathan Dayton and Valerie Faris (making their first feature since Little Miss Sunshine) delve into some interesting emotional territory with regards to the implications of this odd arrangement, and to their credit, they realize the story is only cute to a point. They take that point seriously--perhaps too seriously, with a climactic confrontation between the writer and his creation that plays beautifully on its own, but is a bit too jarring a tonal switch from what comes before (and the switch back, with the too-easy ending, is equally bumpy). Ruby Sparks has some interesting ideas about romance and the creative process, but this viewer would have welcomed a deeper and more penetrating satire of the tropes it's examining, or any of the other ideas it leaves tantalizingly unexplored.