Twilight Time // Unrated // June 12, 2012 // Region 0
List Price: $34.95 [Buy now and save at Amazon]
Review by Stuart Galbraith IV | posted July 30, 2012 | E-mail the Author
20th Century-Fox wouldn't let Marilyn Monroe anywhere near Dostoyevsky but did allow Jayne Mansfield and Joan Collins a crack at John Steinbeck in The Wayward Bus (1957), an offbeat, not entirely successful but nonetheless fascinating little drama adapted from the author's 1947 novel. It's like watching Bus Stop (1956), Fox's earlier Marilyn Monroe hit, done in the style of The Last Picture Show (1971), with a plot and ensemble cast of characters similar to another big '50s hit, The High and the Mighty (1955).

The film is notable for its striking black and white CinemaScope photography, which looks particularly good in the extremely crisp high-definition transfer Fox has provided distributor Twilight Time. Black-and-white 'scope can look great - the British Blu-ray of Hammer's Paranoiac comes to mind - and this is about par with that release. Visually, it's miles ahead of another, higher-profile Twilight Time release covering the same period, Fox's Journey to the Center of the Earth (1959).

The disc also includes fairly extensive extras, including a nice booklet essay, an audio commentary track, a trailer, and an isolated music track. 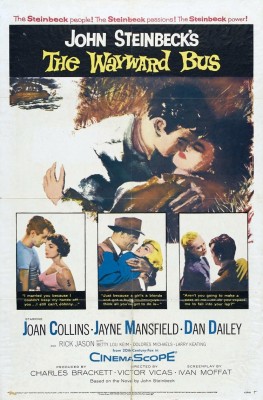 The basic story and characters stick fairly close to the novel. In rural Rebel Corners, in the heart of "Steinbeck Country," Johnny Chicoy (Combat's Rick Jason), of Mexican-Irish blood, is a bus driver and with an alcoholic, possessive wife, Alice (Joan Collins) with whom he operates a run-down roadside diner/bus depot, aided by waitress Norma (Betty Lou Keim), who dreams of trying her luck in Hollywood, and handyman Ed "Pimples" Carson (Dee Pollack), a distant descendent of Kit Carson.

Their meager bus route is threatened by competition from Gray Fox Bus Lines (Greyhound in the novel). Johnny's broken-down bus, "Sweetheart," is clearly on its last legs. Nevertheless, passengers arrive for the connection between Rebel Corners, in southernmost California, and San Juan, across the border into Mexico.

Along for the ride are stripper Camille Oakes (Jayne Mansfield), en route to another thankless job; Ernest Horton (Dan Dailey), a traveling salesman and "fresh guy on the make" for Camille, he unaware of her occupation; Elliott and Bernice Pritchard (Larry Keating and Kathryn Givney), traveling with their adult daughter Mildred (Dolores Michaels), she obviously itching to break free from her bickering parents' hold. Shortly before departing a local man in a hurry, Van Brunt (Will Wright) joins the party.

The characters interact on the bus while back at the roadside café Alice goes on a bender. Meanwhile, a huge storm brews, threatening to take out bridges and trigger landslides along the way.

The Wayward Bus had languished in development hell for a decade, largely because the Production Code would never allow onscreen the explicit sexual tensions between characters that drive the novel. Various names came and went, including Marlon Brando, Robert Mitchum, Gene Tierney, and Joanne Woodward, the later slated to play Mildred until just before shooting commenced. George Stevens and Henry Hathaway were among those announced to direct.

The film that resulted is an odd mishmash of obvious compromises, but these compromises are also partly what make it interesting today. Joan Collins, for instance, has been totally, almost shockingly deglamorized in the role of Alice (just like another Alice, Audrey Meadow, for her iconic role as Alice Kramden) and, what's more, the London-born star does it with a perfectly convincing American accent. It's still a clichéd part - the shrewish, money-grubbing, hard-drinking jealous wife of the handsome leading man - but Collins undoubtedly surprised many with her range.

Fox was trying to keep Mansfield busy between the productions of her two best film appearances, in Frank Tashlin's The Girl Can't Help It (1956) and Will Success Spoil Rock Hunter? (1957). Her role here can't avoid comparisons with Marilyn Monroe's in Bus Stop, but Mansfield more than holds her own. Where in Tashlin's two mini-masterpieces Mansfield was little more than one step removed from his earlier cartoon shorts, in The Wayward Bus she is far more naturalistic, and her imperfect facial features - one hardly gets a glance at her more famous assets - somehow make her seem more real and approachable, and less like a female female impersonator.

The film's against-type casting intrigues still further, with breezy Dan Dailey playing a middle-age ne'er-do-well trying to hop in the sack with Mansfield, while Keating, usually cast as stuffy, conservative pillars of his community, gets to play it sleazy here.

The other leads are less successful. The film's big hayloft seduction scene between Jason and Michaels was considered Hot Stuff in 1957 but today comes off as ridiculously tame, and she makes little impression overall.

Moscow-born French director-screenwriter Victor Vicas all but bluffed his way into Hollywood, but with cinematographer Charles G. Clarke gave the film an arty, non-studio look, even prompting Fox to enter it into competition at the Berlin Film Festival. This approach is apparent on the Blu-ray cover art (see above) in which Joan Collins almost looks like ZaSu Pitts in Greed.

Filmed in 2.35:1 CinemaScope, The Wayward Bus sparkles in razor-sharp black and white. The title elements are obviously softer (and tinkered with digitally, judging by their strange appearance) but the rest of the film looks just great. Particularly nifty are several miniature effects scenes, one involving a landslide and the other a raging river that washes out an old, rickety bridge. I would have thought this originally had been released in 4-track magnetic stereo, but the audio is monophonic DTS-HD Master Audio only, so either the stereo tracks were lost or never existed in the first place.

Supplements include a brief but excellent booklet essay by Julie Kirgo; an audio commentary by regular Fox title contributors Alain Silver and James Ursini; and a hilariously overwrought trailer (it looks bumped up from SD to me) promising "Violent Love" (Jason and Collins), "Second-Hand Love" (Mansfield and Dailey), "Young Love" (Keim and Pollack), and "Bold Love" (Jason and Michaels).

Though not exactly great, The Wayward Bus makes fascinating viewing, and the disc is extremely impressive in terms of its transfer and its better-than-usual extra features. Highly Recommended.