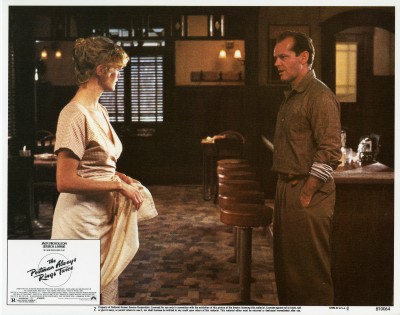 Cinephiles can be a funny lot. It's pretty standard to hear that there will be an adaptation of a beloved book or a remake of a well-liked film and to bemoan that Hollywood is out of ideas and the reiteration is never as good as the original, and yet all of us have adaptations and remakes that we really love and we flock to see these things regardless of how much we bitch and moan at the outset. In truth, the motion picture industry was quick to adapt plays and novels even in the silent days, and remakes happened even faster in olden times. It's a part of tradition, and why respected filmmakers usually want to try their hand at one or the other or both.

The 1981 version of The Postman Always Rings Twice is both a remake and an adaptation. Screenwriter David Mamet (House of Games, Redbelt), making his feature film debut, and director Bob Rafelson (Five Easy Pieces) are pulling off a double-redo, drawing from both the 1946 John Garfield/Lana Turner noir and the James M. Cain novel upon which that film was based. Their update keeps the 1940s setting and the same basic story, but pushes the narrative a little further, taking the crazed relationship of a criminal drifter and a devious woman to its outlying conclusions, including all the sexual kinks and desperate measures that censorship standards would never have allowed Tay Garnett to explore in his original English-language version. (Both the French and the Italians beat the Americans in getting Postman to the screen.)

Jack Nicholson takes over for Garfield, playing Frank Chambers, a charming con man with an animalistic propensity for violence. He ends up at a remote roadside diner and garage along a desolate stretch of California highway as part of a dine-and-dash routine. When the owner of the diner, Nick (John Colicos, The Changeling), offers him a job to stay on as mechanic after falling for Frank's sob story, the crook initially turns him down. Frank changes his tune, however, when he sees Nick's wife, Cora, a sultry blonde with a temper to match his own and the unhappy marriage to give it added fire. Jessica Lange has replaced Lana Turner, and holy geez, watch out. Lange is a scorcher as the temptress. Her sensual performance dominates Postman. Nicholson, even here at the peak of his powers, often looks like he's struggling just to keep up.

The sexual relationship between Frank and Cora is informed by their interior passions. Their initial encounters, especially, border on the sado-masochistic, as the lovers push and pull and scramble for control. The sex scenes are raw and steamy, and still seem daring more than thirty years later. They might even be more shocking now, given our current cultural sensitivity to male/female relationships and bedroom politics. Rafelson doesn't shy away from showing the two being rough with each other, and the physicality can be as unnerving as it is arousing.

Plot-wise, the narrative of The Postman Always Rings Twice turns to murder. Frank and Cora make a plan to get rid of Nick, and the success of this conspiracy is the critical turning point of the tale. Mamet's script could almost be divided in half. There is the stuff leading up to the murder, and then the aftermath of the crime and what happens when these two volatile people are stuck with each other with no one to come in between. Perhaps unsurprisingly, the energized emotions of that first half overshadow the more difficult aspects of the second half. From a voyeuristic standpoint, the cheating and the scheming are just more fun than the hand-wringing and guilt trips.

Video:
The 1981 version of The Postman Always Rings Twice makes its high-definition debut as a 1.85:1 widescreen transfer mastered in 1080p. Shot by legendary cinematographer Sven Nykvist, who is known for exploring more grounded emotional terrain with Ingmar Bergman and Woody Allen, Postman captures the look and feel of both the remote locale and the time period it depicts. There is a hazy brownness to the whole affair, broken up by occasional splashes of color, like the gaudy neon sign Nick hangs outside his restaurant. The isolation demands a certain drabness (contrasted later by the brighter scenes with the traveling circus, and the serpentine Anjelica Huston covered in sweat and glitter). At the same time, there is a careful attention to detail paid to everything, from the clothes to the products in Cora's pantry. All of this is visible on the Blu-ray, even if at times the image may look a little soft or there is a bit of noise evident on the screen. It's a nice upgrade, not entirely perfect, but solid.

Sound:
The mono soundtrack is given a DTD-HD Master Audio mix, and it's really nicely done. Despite being one channel, it feels like there is a lot girth behind it, with good modulation allowing for subtle details to come through while the dialogue remains prominent.

Alternate dubs include mono Dolby mixes in French and Spanish (both Castilian and Latin), with subtitle tracks in all spoken languages. The English subtitles are geared toward the deaf and hearing impaired.

Extras:
Only a couple of extras. In addition to the expected theatrical trailer, there is also a scene-specific commentary with Rafelson, Mamet, and Nicholson.

FINAL THOUGHTS:
So, yeah, a remake and an adaptation both, this update of The Postman Always Rings Twice doesn't necessarily surpass either of the original sources, but it does walk in stride and without shame alongside its predecessors. The Bob Rafelson/David Mamet take of the James M. Cain novel retains the essential plot while also digging deeper into the perversions of its core criminal couple in ways the older film versions never could. Jack Nicholson and Jessica Lange make for a fiery combination, believable as lovers desperate enough to turn to murder to get what they want. The movie looks pretty damn good in high-definition, too, making this edition of The Postman Always Rings Twice Highly Recommended.