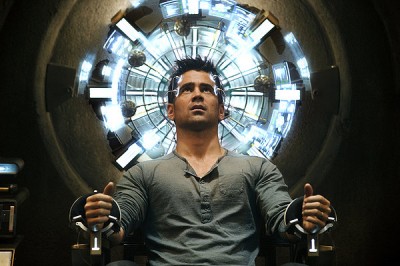 Yes, yet another Hollywood remake of a film that's not even that old, but relax: Paul Verhoeven's 1990 version of Total Recall is probably not as good as you remember and Underworld mastermind Len Wiseman's 2012 redo is better than you probably expect it to be. Somewhere in the middle is justification for going to this well again. Besides, neither film is much like Philip K. Dick's 1966 short story upon which both are based. Purity of vision is as murky as Douglas Quaid's memory.

In this spin around the block, the Quaid role passes from Arnold Schwarzenegger to Colin Farrell, and the action moves from Mars back to planet Earth. In this reimagined future, chemical warfare at the tail-end of the 21st Century has made all but Great Britain and Australia (now just called "The Colony") uninhabitable. The two places are connected by a massive underground tunnel, and workers shuttle back and forth in a skyscraper-sized elevator called "The Fall." Amongst those is Douglas Quaid, who goes from the Colony to the United Federation of Britain to work the assembly line building faceless enforcer androids for the UFB. These killer robots are part of the government scheme to keep the Colony in line, despite a growing resistance that would rather have the territory be independent.

For all intents and purposes, Quaid has a decent life. He has a job, friends, and a good marriage. Lori (Kate Beckinsale) is a police officer. Yet, Quaid is troubled by dreams where he keeps trying to escape a prison facility with the help of another attractive brunette, Melina (Jessica Biel). Convinced that something isn't quite right with his wiring, Quaid visits a Rekall facility, where technicians will implant memories of his choosing, so he can remember better times he never had. Only, when Quaid goes for the secret agent fantasy, things go haywire. Apparently, he already is a secret agent, and he just doesn't know it. From there, the chase is on. 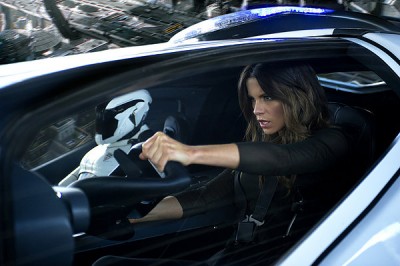 And that's when Total Recall works best. When Quaid is on the run, pursued by Daft Punk Stormtroopers and his pissed-off wife. Melina gets back into the picture, and though with each pit stop along the route the hero unravels a little more of the mystery about who he is, that is basically secondary to the violence. Total Recall is a fun sci-fi action picture full of awesome fight scenes, an anime Bourne Identity. Hand-to-hand combat in close-quarters, car chases in vehicles that run on magnetic waves, a game of cat-and-mouse in a criss-crossing elevator system--the skirmishes are brutal and the pursuit fast-paced. If this is all you go to Total Recall for, you will be more than happy with the money spent on a ticket.

Bonus, then, that you'll also get a pretty cool future vision to gaze at. Since space in this new world order is at a premium, it's all about levels. Structures stack on top of one another and connect, leaving little open space unaccounted for. Tenements stretch to the sky, and people and machines move both vertically and horizontally. The entire construction is pretty incredible, with a seamless melding of real objects and computer graphics. The gadgets we get to see, from the flying cars to the improvements in cell phone technology, are also totally awesome. Wiseman has concocted a neat-looking image of tomorrow, owing a huge debt to Blade Runner and borrowing more than its fair share of lens flares from J.J. Abrams. (Feel free to give some of them back, actually, you didn't really need them.) 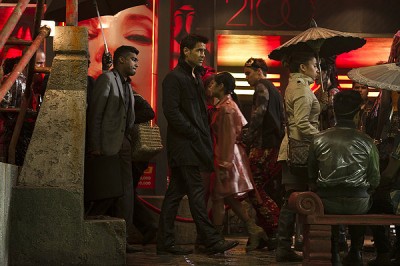 Sure, the plot of Total Recall gets a little loopy. Bryan Cranston in particular has to deal with a lot of pretzel-shaped exposition in trying to explain just what the hell is going on. The Breaking Bad-star gets to play the dictatorial ruler of the new Britain, and though it's weird to see him with hair after a couple of years of Walter White, his is a far meatier role than his opposite; Bill Nighy's resistance leader is little more than a philosophical prop. Colin Farrell is strong in the lead. He sells both the physical aspects and Quaid's general confusion. Kate Beckinsale is also pretty great, making for a fairly agile and deadly villain. The marriage puns become a little worn by the end, but at least the politics give her a bit more motivation than just being the bitchy "spouse" (which is my memory of Shaon Stone from 22 years ago). I'm not normally one to really care about cat fights, but I could watch Kate Beckinsale and Jessica Biel whale on each other for hours.

Total Recall may not be perfect--apparently, dubstep survives chemical warfare, making it the musical equivalent of the common cockroach--but it is the right kind of light entertainment to while away a lazy August day. It's a popcorn picture without any pretentions of being anything more, and yet one that doesn't leave you feeling stupider for having watched it. Len Wiseman loads in the fun at the start, and he doesn't stop scooping in heaping dollops of the same until the whole thing is done. 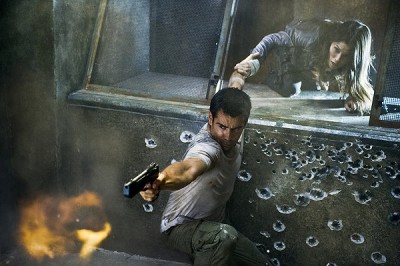