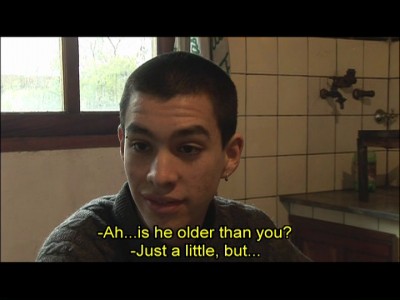 Twisted Romance, a 2008 indie drama from Argentinian writer-director José Campusano, deserves some kudos for going into the kind of uncomfortable-to-watch territory that many films of its ilk won't touch.

Seemingly made on a budget of three (maybe four, max) pesos, this modest production follows an earnest young man who engages in a flirtation with a "dangerous" older man; their sexual dalliance progresses with lightning speed into a casual cohabitation, but the older man's abusiveness ultimately ends in tragedy. It's an idea that deserves an "A" for effort, but sloppy mechanics, inexplicable character motivations, and abrupt shifts in tone renders it a solid "F" in execution.

Not that they didn't try, however - young actor Nehuén Zapata has a measure of winning charisma in the lead role of Roberto, a gay youth who lives in one of the shabbier corners of Buenos Aires with a pair of female prostitutes. His roomies, women of two different generations (in a roundabout way, it's eventually revealed that they're Roberto's mother and sister), are often busy entertaining clients at their home, so Roberto is usually found wandering the area in search of work and/or cheap thrills. It's at the local train depot that he comes across Raúl (Oscar Genova), a shaggy, slovenly fellow who brazenly invites Roberto back to his place for some rough but apparently satisfying sex.

Although the character of Raúl comes across as maddeningly enigmatic, selfish, rude and physically unattractive throughout Twisted Romance, there's something about him that keeps Roberto coming back for more. In fact, the film seems to dig itself into an ever-deepening implausibility hole as it unfolds, with Roberto quickly moving in to Raúl's sparsely decorated home while bragging about his new boyfriend to mom and sis (both of whom, inexplicably, think he's quite the catch). While the underacheiving Raúl scrapes out a living by making crude firearms and selling them on the black market, Roberto seems perfectly happy being the man's subservient houseboy/concubine - until he has a dalliance with a Spanish guy, César (Javier de la Vega), whom he met on a sleazy internet hookup site. After Roberto and César (who appears infinitely better matched to the young man) have a hot tumble in a motel, they agree to meet on a regular basis. When César finds out where Roberto lives and starts showing up unannounced, however, Raúl catches on to the two-timing and the inevitable hot-blooded confrontation blows up in all their faces.

Granted, there is the germ of a good idea in Twisted Romance, but the film is so clumsily directed and episodic that it's hard to take any of it seriously. Most of it is done in a muted, casual manner that shares a few similarities with the only other Argentinian gay film I've seen, 2009's Plan B. On the plus side, one does gets a adequate sense of the desperation present in every corner of this neighborhood - Roberto seems to be more in love with the idea of having a stable relationship with a semi-settled older guy, clinging to it as an escape from his humdrum existence. He's not self-aware enough to notice how wrong his union with Raúl is, however, until it's too late. Shot digitally with off-the-shelf equipment, the film takes on a clumsily performed, weirdly emotionless tone up until the torrid, violent climax, which plays out like the scene from a bad telenovela. I'm as willing as anyone to give independently produced gay films some slack. Like Roberto's inexplicible pull towards a man who is utterly wrong for him in every department, however, the advice I'd dispense to all potential viewers of this grimy little flick would be to run like hell in the other direction. 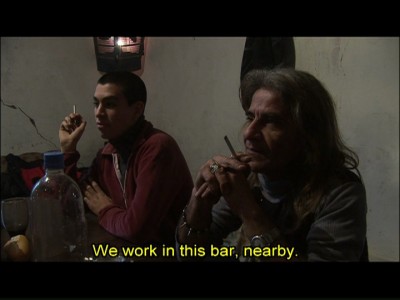 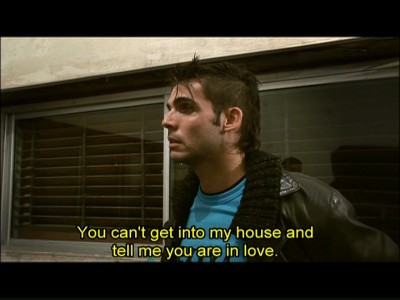 Breaking Glass Pictures' DVD version of Twisted Romance presents the film's 1.85:1 picture in letterboxed full-frame format, in an adequate transfer. The handheld digital photography and available lighting used throughout Twisted Romance is nothing to write home about, visually, but the image is agreeable throughout with decent light levels and a clean picture.

The film's original Spanish language soundtrack is the only audio option, an unexceptionally mixed track that relied on available ambient sound with little post-production sweetening (only an unobtrusive guitar on the soundtrack intrudes every once in a while). A typo-riddled optional English subtitle track is provided on the disc as well.

Nearly seven minutes of bonus scenes, which appear to be alternate takes of scenes used in the film, comprise the main extra on this lean disc. A trailer and previews for other Breaking Glass releases (like the far superior House of Boys) round out the bonus content.

An Argentinian drama about an abusive same-sex relationship, what's not to love? Writer-director José Campusano may have had the best intentions in mind for this searing portrait of two men at differing stages in their lives, but Twisted Romance's end product winds up being too shoddy and clumsily played to be taken seriously. This film is 105 minutes of pure "what do they see in each other, anyhow?" futility. Skip It.