Monroe's uncredited voice was heard but her face not shown in The Shocking Miss Pilgrim (1947), while another film sometimes cited as her debut, Scudda Hoo! Scudda Hay!, was actually released several months after this, and anyway she wasn't credited in that one, either. In Dangerous Years however, Monroe is billed third from the bottom but billed she is, and though it's a tiny role, she's visible in several early scenes and even has a couple of lines as Evie, a waitress. Just twenty-one, she's very young and naturally beautiful here. It's nice to see her prior to her (over-) transformation by Fox into Sex Goddess.

But Monroe's debut, curiously unmentioned on the packaging, is only one reason to see this interesting little film. It predates similar if more realistic and hard-hitting movies like Blackboard Jungle by several years, and while it's hardly in that same league, Dangerous Years certainly is a curiosity and overall pretty good for a modest little "B."

A "Fox Cinema Archives" release, Dangerous Years gets an excellent transfer that belies the cheap-looking packaging. There are no extras, but unlike frequent releasing partner MGM's MOD line, this Fox title is region-free. 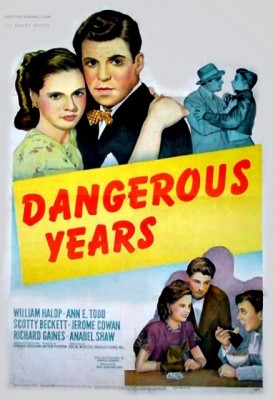 Jeff Carter (Donald Curtis) is a history teacher and Boys Club organizer in Middleton, Small Town, USA, concerned about the Gopher Hole, a new jukebox roadhouse that's become that rage among all the high school kids, and its corrupting influence on especially vulnerable teenagers.

In fact, newcomer Danny Jones (one-time Dead End Kid Billy Halop), a 20-something "old enough to vote," has been recruiting kids from his backroom poker games for various gas station robberies and the like. His latest caper involves robbing a warehouse for which he corrals anxious-to-please teens Willy Miller (Our Gang veteran Scotty Beckett), Gene Spooner (Dickie Moore, another Our Gang kid), and Tammy MacDonald (Gil Stratton, Jr.), with Doris Martin (Ann E. Todd), foolishly in love with Danny, providing them with an alibi.

However, the heist goes sour when Jeff suddenly turns up and Danny shoots him dead. Everyone scatters but the police quickly pin the murder on Danny, with local district attorney Edgar Burns (Richard Gaines) determined to win a conviction for the capital offense.

Though modestly produced by Sol M. Wurtzel and Fox's B-unit, the film probably surprised, perhaps even shocked audiences of that time, though certainly not to the degree of Blackboard Jungle and later, more violent juvenile delinquent exposés. But Dangerous Years has its moments. When police arrive at Willy Miller's house, his abusive father (Joseph Vitale) drags his son to a back room and beats a confession out of him while the two policemen casually stand by, contemplating the Miller family's liquor cabinet. And, pointedly, each delinquent's actions is traced back to abusive or neglectful parents.

The violence is always off-camera, but the boys' crimes are serious offenses. That they're baby-faced teens dressed like Archie and Jughead, who address all the adults as "Sir" or "Ma'am" adds to this jarring contrast.

For a movie running barely over an hour, Dangerous Years sure shifts gears a lot. At first the movie looks like it's going to follow Jeff and his efforts to reform the boys. Then when he's murdered the story shifts toward terrified witness Willy, but about halfway through the focus shifts yet again, this time to Danny. At this point the movie makes a wild right turn into outrageous soapy melodrama dangerously approaching high camp, but Halop's sincere performance almost sells its wild plot machinations.

Conversely, while hard-drinking Halop was just 27 he looks more like 45 and really seems out of place, especially alongside his cherub-like co-stars. (Later, when he was a regular on All in the Family Halop was in his 50s but looked at least 70.)

The picture does make great use of the young actors generally, however, with the tragic Scotty Beckett, in real life on the cusp of delinquency and, eventually, an early death, coming off particularly well. Darryl Hickman also has a good scene as a witness testifying against Danny, while Tom Kennedy is brought in for effective comedy relief as a night watchman.

Dangerous Years, presented in its original full-frame format, has been given a handsome transfer with solid blacks and good contrast. It looks like it hasn't been touched since its original release. The region-free DVD offers decent mono audio, with no alternate audio or subtitle options. No Extra Features. The packaging is on the cheap side, and the one-sentence product description was written by someone who obviously either didn't bother to watch the movie or didn't care that he gives away a big, climatic plot twist not revealed until the film is almost over.

Die-hard Marilyn Monroe fans will want to add Dangerous Years to their collection, but the picture has much more to offer beyond that and comes heartily Recommended.