Once Upon a Time: The Complete First Season 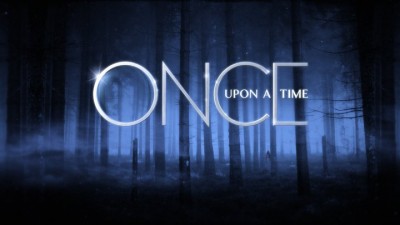 Once Upon a Time is a fantasy series created by writers Edward Kitsis and Adam Horowitz.  The two artistic bosses of this new hit series were part of a small pool of writers that worked on the ABC series Lost, arguably the network's most successful series ever, and the two creative and visionary writers ended up writing episodes of the show for all of the six seasons it was on air. Would two of the primary brain-funds behind the genius otherwise known as Lost be able to begin their own television series and find similar success? Magic Eight Ball Response: The Outlook Looks Extremely Likely!

While writers Edward Kitsis and Adam Horowitz were not the creators or show-runners behind television's Lost (that would be Damon Lindelof and Carlton Cuse) they were both essential to the success the series found. However, before Lost even began as a series, the duo had already started to formulate some serious ideas for a fantasy based program about fairy tale characters and this is what eventually led them towards creating Once Upon a Time.

The series is different than anything else on TV. The story premise is also quite intriguing: fairy tale characters have happy endings in their world of the fantastical but wind up facing The Evil Queen in a serious showdown between the two sides. A curse is placed on everyone: the curse? That no one will live out happy endings anymore - everyone will be banished to living out the lives they have in the "real" world.

The pilot episode does an excellent job establishing the backdrop of the show and is immediately intriguing for it. Few shows begin with such a high level of ambition. One of the things that was telling from the beginning of the show was that creators Edward Kitsis and Adam Horowitz had serious plans about telling something new and compelling of their own now that Lost is finished. There's nothing as refreshing in the television industry as two dedicated show-runners who seem determined to tell a story, an exciting one, and one that is unique.


In the real world, the fairy tale characters don't have any idea about the curse in their own "real" world and they are instead living out lives that are constantly under the gaze of the curse. Every character lives in a town called Storybrooke and are unable to leave without facing the coldness in unhappy endings. Somehow, someway... the curse must be lifted to set things right for all of them.

Luckily, Edward Kitsis and Adam Horowitz learned a great deal from their time spent working on Lost. You can tell that Once Upon a Time is in part the result of a great deal of knowledge gained in storytelling while working on that show. First of all, the entire writing team of this series remembers to place character ahead of everything else on the list of important things. Developing the characters and getting to understand them and who they are is fundamental. Essential to understanding the show. It is an element that sets it apart from being something limited to only telling a story of a curse that needs breakin': no, this show has a larger issue, goal, and ambition at hand. Once Upon a Time is really a show about people and about the relationships we have with ourselves and each-other. This makes the series infinitely more interesting.

As the series progresses we learn new things about all of these characters: both in the setting within the world of "fairy tales" and the "real world" realm. Instead of simply rehashing out things we already know about fairy tales and the characters that inhabit them we learn about these characters as if for the first time and with backstories that aren't the same. Indeed, the series seems to want to keep viewers on their toes by unraveling the storyline and characters inhabiting the show slowly; and with any number of backstories that amaze us through their ability to be surprising despite the familiarly most of us already have with classic fairy tales.

The series has a massive cast of characters that seems to be growing constantly because of the expansive nature of adding additional fairy tale characters into the mix, but the main cast does consist of a few central characters. Many actors and actresses add an additional aspect into the mix of the elaborate story though and that is an aspect that keeps things interesting. 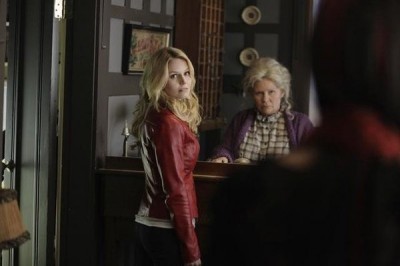 Jennifer Morrison is a lead as character Enma Swan. It would be better for any viewer to tune into the series to find out her place in the story. There is also an excellent role for a child actor with Jared Gilmore delivering a solid performance as a kid who really believes in fairy tales as being real. He is one to recognize a world outside of Storybrooke. He shares this knowledge to outsider Enma Swan. Ginnifer Goodwin (Snow White), Josh Dallas (Prince Charming), Lana Parrilla (The Evil Queen), and Robert Carlyle (Rumplestiltskin) are the rest of what could be descried as primary cast members during season one.

Everyone on this show does excellent work portraying their characters but the most notable performances are by Ginnifer Goodwin, providing warmth and bravery as a kick-butt Snow White and Robert Carlyle as the wild card of the show, in performing a wickedly confusing Rumplestiltskin, who always seems most interested in himself.

One of the things that is enjoyable about the show is not just that the characters are explored in different ways than imagined in our traditional understanding of fairy tale characters. It is how things develop during the show and the twists and turns that keep things interesting. Theme is naturally a key aspect to the course of events during this series and it helps keeps the show as grounded as possible in a human reality that is all the more compelling because of it. We care about these characters as real people and not just as imagined characters from a storybook. It amazes me how the series combines our love of storybook storytelling with characters with a genuine sense of emotional depth. Once Upon a Time is all the better for it.

If I have any complaints about the show it's that the directing seems somewhat inconsistent. The series could use a television director as talented as someone like Jack Bender, the frontrunner in directing Lost. Speaking of Lost, I was also annoyed by how many times the series made some kind of Lost reference. All of the series references will feel obscure or unknown to those who were not fans of Lost but it just seemed to be a bit too much at times.

I understand that the references probably exist because some of the Lost writers are working on this show, and that's cool... however, I don't want so many reminders. How many Apollo bars, MacCutcheon whisky, Ultimate Wolverine vs. Hulk, and Sewing moments (symbolizing the progression of an engrossing story that has many plot threads) be included in one show?  It seemed a tad overdone to me.

Once Upon a Time ended up becoming one of the most successful series to premiere over the past year and broadcasting network ABC must be thrilled with the ratings it's been receiving. With around 10 million viewers regularly tuning in, it's easily one of the most successful series that currently airs on ABC and with the premiere of season two looming ahead the series might be capable of finding even more broadcasting success.

The series might have a long way to go to reach its conclusion but viewers will likely be up for the task with such excellent storytelling contributing to this series unique brand of excellence.  The season two premiere should only be expanding upon things even more for most viewers, undoubtedly. Once Upon a Time is one of the best and most intriguing fantasy series on TV. 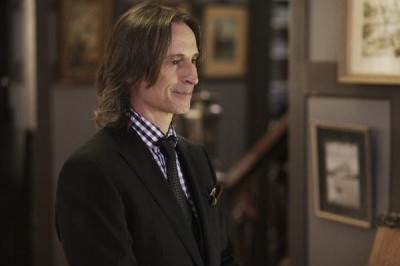 Once Upon a Time arrives on Blu-ray across five discs with an AVC encoded transfer in 1080p High Definition. The image quality is stunning and will really amaze fans of the show that did not see the show with such sparkling clarity while watching ABC's 720p television broadcasts. Visually, the show is a creative wonder that blends the realm of reality and fantasy seamlessly. The cinematography is sleek and appealing. The art design is fascinating and immersive with high definition playback. The one major drawback to seeing the show look so clean, detailed, and smooth is that the special effects sometimes look too cartoony (or is it campy?) when the comparisons are made between effective special effects and those that can sometimes find an ability to underwhelm. Otherwise, Once Upon a Time looks about as impressive as any show can.

Once Upon a Time contains a 5.1 DTS-HD Master Audio mix for each episode. This is great news in that TV series with high resolution audio are always going to impress more with the sparkling Blu-ray treatment.

Unfortunately, I was a bit disappointed with directionality. Unlike any given episode of Lost, Once Upon a Time doesn't have a sound design that is even remotely close to sounding as expansive and intense as that series constantly did throughout its entire run. The sound is surprisingly front-heavy and center-channel directed. I kept expecting more to happen in developing the show's sound design but it just seems as though it is not as movie-like or artistically creative a sound design. At best, the audio does offer viewers high resolution compositions from composer Mark Isham and the dialogue is always crisp and easy to understand.

This Season One release of Once Upon a Time features a decent selection.

Fans of commentaries should be pleased by the inclusion of five different commentaries on the following episodes: Pilot, 7:15 A.M., Skin Deep, The Stable Boy, and A Land Without Magic.

Fairy Tales in the Modern World is a twenty minutes long behind the scenes featurette featuring commentary from writers Edward Kitsis and Adam Horowitz about their creation of the show, cast interviews, and footage surrounding the development of the show.

Building Character is a short featurette exploring Edward Kitsis and Adam Horowitz's take on exploring these Fairy Tale characters in a way different from what many were expecting to see, and how this model of exploring the characters works on Once Upon a Time.

The Story I Remember... Snow White featurette has the cast reflecting upon their own experience and history with the Snow White story.

Welcome to Storybrooke is a piece about the actual town of Steveston, British Columbia that is used to create the fictional center of the Once Upon a Time series.

The rest of supplements include a Special Orchestral Suite featuring a selection from composer Mark Isham, deleted scenes from the entire first season, and bloopers. 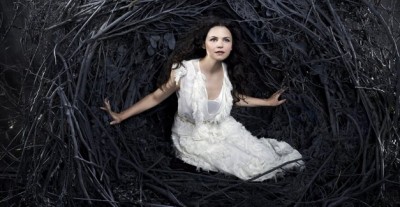 Once Upon a Time is another successful fantasy series from ABC Studios. Created and guided from some of the writers of Lost, Once Upon a Time combines excellent ambitious storytelling with interesting fairy tale characters. It is unlike anything seen before on television. A high quality Blu-ray release with excellent PQ, decent AQ, and a nice assortment of bonus features helps to make this a release that is well worth owning.