Shout Factory // Unrated
List Price: $29.99 [Buy now and save at Amazon]
Review by Stuart Galbraith IV | posted October 26, 2012 | E-mail the Author
I remember catching An American Christmas Carol when it first aired on December 16, 1979. The idea of Henry "The Fonz" Winkler more or less playing Ebenezer Scrooge in an Americanized reworking of the Charles Dickens's famous story didn't sound very promising. I think I must have been expecting something more along the lines of The Paul Lynde Halloween Special rather than the completely valid, even admirable TV movie it turned out to be.

Shout! Factory's newly remastered DVD (also available on Blu-ray) confirms my faded memories. Though not in the major leagues of Christmas Carol adaptations, Jerome Coopersmith's teleplay nonetheless is imaginatively written. Shot on 35mm film, the full-frame presentation looks good and a new interview with Winkler is tossed in as a welcome extra feature. 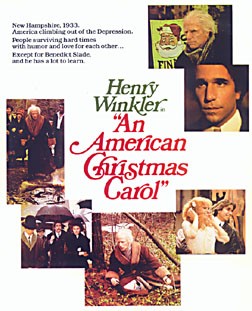 The story moves Dickens's middle-1800s setting to Concord, New Hampshire on Christmas Eve 1933, near the height of the Great Depression. Finance company president Benedict Slade (Winkler) spends the afternoon heartlessly evicting people and repossessing property. One of the twists in this version is that ghosts of Christmases Past, Present, and Yet to Come are played by actors who double as Scrooge/Slade's debtors. The Ghost of Christmas Past (David Wayne), for instance, is also a bookstore owner whose stock Slade ruthlessly strips for its leather binding. The Ghost of Christmas Present (Gerard Parkes) also runs the orphanage in which Slade was briefly raised, while The Ghost of Christmas Yet to Come (Dorian Harewood) is the patriarch of a young black farming family struggling to make ends meet.

Coopersmith wisely doesn't just graft A Christmas Carol's highlights onto its Depression Era setting. There's virtually none of Dickens's memorable dialogue, yet the screenplay does a very good job politicizing and making relevant to contemporary viewers capitalist Slade's place in early-20th Century America. Instead of merely growling "Humbug!" at a group of caroling children, he warmly invites them into his business, and as "gifts" passes out leaflets with personal, Ayn Rand-type advice about financial responsibility and self-reliance. "He thinks he's doing us a favor," says one forgiving, observant boy.

In the Christmases Past segments, the audience learns Slade was adopted and apprenticed by traditional furniture manufacturer Mr. Brewster (Chris Wiggins in the Fezziwig part), and that after the Great War Slade tries unsuccessfully to get Brewster to adopt the cost-cutting assembly line methods of Henry Ford, but Brewster is aghast: Cheap nails instead of hand-crafted pegs? Never!

Later, Slade becomes fascinated with the concept of "time payments," the era's predatory equivalent of credit cards, which he extolls to the Jacob Marley character (Ken Pogue). The way the system is designed, Slade says, it's possible to see a 200% return on the purchase price, and if the debtor can't meet his payments, the item and can be repossessed and sold again!

Jerome Coopersmith enjoyed an intriguingly varied career, first as a writer on children's shows like Johnny Jupiter, then as a Tony-nominated Broadway playwright (The Apple Tree, Baker Street). He then segued backed into television around 1973, writing numerous Hawaii Five-O episodes and creating his own short-lived series, The Andros Targets (1977), about a crusading reporter. He wrote several Christmas-themed shows, such as the intriguing Hallmalk Hall of Fame special Have I Got a Christmas for You (1977).

Less clear is what fuels Slade's need to be financially independent and secure, but through it all Henry Winkler makes a surprisingly credible Scrooge knock-off. At the time, Winkler was starring on the hugely popular sitcom Happy Days. Hard as it is to imagine now, for that show's first few seasons Winkler was, briefly, bigger than a mere TV star: he was a genuine pop culture phenomenon. This led to some major film and TV offers, including being offered (but turning down) John Travolta's part in Grease (1978). Based on the real snow visible throughout An American Christmas Carol, I'm guessing it was shot around January 1979, well after Happy Days and Winkler specifically and famously "jumped the shark." Happy Days was still popular, but the "Fonzie" phenomenon was by this point already ancient history.

Winkler's verisimilitude as Slade is in no small way helped by the excellent old age make-up, which reportedly took five hours to put on. Winkler, in the interview, credits Greg Cannom (The Curious Case of Benjamin Button) for this, though the end credits also list multi-Oscar-winner Rick Baker, who Winkler doesn't mention.

Except for character star David Wayne and rising talent Dorian Harewood, there are no other big names in the cast, the closest thing to a familiar face being Cec Linder, who had played Felix Leiter in Goldfinger (1964). Filmed on location in Ontario outside Toronto, the film has an authentically period look most of the time and the show is dated only by Harewood's Ghost of Christmas Yet to Come logical but silly 1970s-style costume.

In color and presented in 4:3 standard size, An American Christmas Carol looks just fine on DVD, with the mono (English-only) audio likewise up to the task. There are no subtitle options and the disc is Region 1 encoded.

The lone extra is an 8 ½-minute interview with Winkler, who doesn't say much beyond praising collaborators and remarking on the show's longevity. Apparently he's still frequently asked about it. Not a great extra, but worthwhile.

Not quite the holiday classic you'll want to revisit every Christmas but still far, far better than one might imagine and definitely worth a look, An American Christmas Carol's main asset is Jerome Coopersmith's script, which is imaginative and even insightful at times. Recommended.