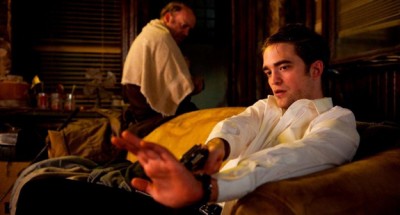 It's been a good long while since David Cronenberg has indulged his inner freak--he's coming off the (comparatively) staid and disciplined trilogy of A History of Violence, Eastern Promises, and A Dangerous Method--which is reason enough to go into his latest picture, Cosmopolis, with a feeling of giddy anticipation. That feeling lasts about twenty minutes, and then you start checking your watch. For a director returning to his home turf, Cronenberg has crafted an oddly airless affair, one strangely lacking in either the enjoyment of execution or the perversity of pleasure so persistent in his earlier efforts. It's not a bad film, of course--Cronenberg is too competent a craftsman for that, and still quite capable of casting a spell. But it's the kind of movie you keep waiting to come together, and it doesn't.

Robert Pattinson--whose appearance in the film will probably put it in front of some utterly confounded teenagers, which is sort of marvelous--plays Eric Packer, a young Internet billionaire living the very definition of "conspicuous consumption" in a (maybe?) vaguely futuristic New York City. At the beginning of the day, he decides he wants a haircut; his barber is across town, and off he goes in his obscenely oversized stretch limo. As plot go, that's pretty much the jist of it.

Cronenberg (who also wrote the script) is up to something in these early stretches, which seem purposefully detached; many of the dialogue scenes are set in the moving car, which crawls through town letting in not a whisper of outside or engine noise, and the ghostly quiet inside the vehicle (along with the obviously green-screened photography) creates an aura of transparent artificiality. Though most of the narrative, Packer doesn't interact with the real world, doesn't step out of his bubble--he sees reality through the windows of his limo, of the diners he stops at for sustenance, and (most importantly) the screens of the computers and devices at his fingertips.

He talks. And talks and talks. The film is basically a series of two-handed conversations, punctured by the occasional weirdo visual or out-of-the-blue anarchist attack, and the filmmaker isn't terribly interested in explaining who everybody is. There's a cold blond (Sarah Gaddon, a rather wonderful embodiment of glassy bemusement) who we eventually realize is his wife; an art dealer (a marvelously slinky Juliette Binoche) and occasional mistress; a business partner (the bleary-eyed Jay Baruchel); and various associates and acquaintances. They sit with Packer, in his limo or in diners, and they talk about abstract ideas--which is pretty inert, cinematically speaking. This is criticism landing on a soft target, as that brainy navel-gazing seems Cronenberg's intent. But whether it's accidental or not, the barrage of chatty, discursive dialogue gets monotonous pretty quickly, and even appearances by the likes of Samantha Morton and Paul Giamatti can only add so much spice.

I've not seen much (read: any) of Mr. Pattinson's other work, and thus can't offer much in the way of comparison; for whatever it's worth, he doesn't seem a terribly expressive performer. But that may be the way he's directed, and for what he's doing here, the straight-on deadpan approach he adopts seems about right.

Cosmopolis wanders and dithers, a free-floating vessel of verbose weirdos spouting faux-intellectual platitudes. Yet I was never bored. Cronenberg's distinctive eye for composition is fully engaged, and there are flashes of excitement and jolts of electricity spread throughout. Those are the moments seized upon by the film's marketing team, who have isolated them to create trailers promising a batty, surrealist hyper-trip. And it must be said: I'd probably rather have seen that film.