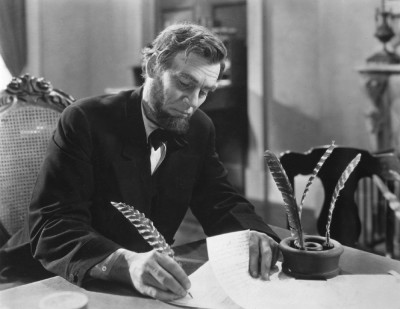 It's fitting that Kino would time their Blu-Ray release of D.W. Griffith's Abraham Lincoln to coincide with Steven Spielberg's Lincoln going into wide release around the world, because judging by the promos included on the disc, Griffith made this 1930 biography to capitalize on the resurgent success of his Civil War epic Birth of a Nation. Like Señor Spielbergo going back to Jurassic Park, so too would Griffith return to the time of his nation's greatest strife and his best box office receipts.

Unfortunately for Griffith, his Abraham Lincoln is nowhere near Spielberg's, either in terms of general moviemaking or in the more specific aspect of lead performances. Though a fine actor known for his roles in The Devil and Daniel Webster and later Treasure of the Sierra Madre, Walter Huston comes nowhere near crafting as compelling and complete a Lincoln persona as Daniel Day-Lewis. Hell, he's not even close to Henry Fonda in Young Mr. Lincoln. In terms of cinematic versions of our 16th President, this one is a real dud.

The trouble begins at the script stage. Written by Gerrit Lloyd and revered poet Stephen Vincent Benet (author of the book-length abolitionist poem John Brown's Body), Abraham Lincoln's screenplay is like the storybook version of history. Honest Abe's early life is treated as a series of tall tales and fables, while his political ascendency and tenure as President is shown as a dull conglomeration of circumstance. Huston's Lincoln is neither driven nor passionate. He is pushed to the White House by a domineering wife (Kay Hammond) and opportunistic political players intent on capitalizing on the lawyer's famed oratory skills. Not that any of those skills are given much attention here. Griffith reduces the Lincoln/Douglas Debate to a scant couple of minutes, with Lincoln appearing more bemused and disinterested while Stephen A. Douglas (E. Alwyn Warren, who pulls double duty by also playing Ulysses S. Grant) is fired up and agitated. It's like seeing Barack Obama go against Mitt Romney in the first of their most recent verbal skirmishes. One of these guys doesn't really seem invested.

While I obviously don't know what D.W. Griffith's intentions were, it wouldn't surprise me to learn that he made Abraham Lincoln as a second form of assassination, this time going after Lincoln's character. The decision to make him so unremarkable and so lacking in charisma had to be a conscious one. Knowing Huston's other work, he would have had to really put some effort into being this uninteresting, it can't have happened by accident. He certainly fits the part physically. The make-up is exceptional, even before the famous beard. Griffith goes so far to show it off by sticking in a clunky shot where Huston appears completely in profile, just so we can see how much he looks like the engraving of Lincoln on the penny. He might as well be made out of copper for all the energy the actor shows. Walter Huston even flubs the death scene. When John Wilkes Boothe (Ian Keith, bringing a healthy amount of corn to his two scenes) shoots the President at Ford's Theatre, Huston's reaction is like a child realizing that his parents just got home and he is supposed to be in bed. Eyes shut, head down, I'm asleep!

Yet, it's more than the somnambulistic portrayal of the President that leads one to wonder where the once great filmmaker's true intentions lie. Given some of the more troubling racial aspects of Birth of a Nation, one can't help but give weight to the equally queasy, near-wistful portrayal of the Confederacy in Abraham Lincoln. The Union's early struggles in the Civil War are credited to the Confederates simply being better men than their soldiers, and General Robert E. Lee (Hobart Bosworth) is a compassionate leader who loses graciously, going so far as to sob into his pillow over all that was lost. Lincoln, by comparison, is po-faced and tired, as well-mannered in victory as his opponent is in defeat, but clearly looking beaten himself.

It should come as no surprise that the best scenes in Abraham Lincoln are the brief battle sequences. No one could stage warfare like Griffith (well, except maybe Spielberg). There is also a tender love story between young Abe and Ann Rutledge (Una Merkel) that reminds us that Griffith was capable of directing believable characters once upon a time. Regardless of the end result, the production is directed with confidence, the filmmaker had not entirely lost his faculties. Even so, it's a rather poor way to end an influential career. D.W. Griffith only made one more feature after Abraham Lincoln, a drama about alcoholism, before the final end card appeared on his own illustrious filmography. 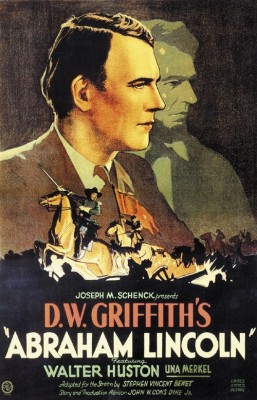 Video:
Kino's Abraham Lincoln Blu-Ray uses the 35mm restoration done by the Museum of Modern Art as the source for its 1080p, 1.20:1 transfer. This restoration represents the most complete presentation of Abraham Lincoln currently available, running 93 minutes, including about five minutes of exclusive footage that, sadly, is missing its soundtrack. Kino shows those scenes in context, with subtitles providing the absent dialogue and describing the missing music cues. Knowing that the film has been left in such disrepair goes a long way to both explain why a few sequences still look a bit damaged and to demonstrate how strong the overall restoration work is. The majority of the film looks clear, with decent resolution and a nice balance in the black-and-white photography. You will see some scratches and other marks, as well as hazy edges around the frame, particularly in the closing scenes, but in general, Kino and MoMA have done an exceptional level of work to bring Griffith's film back to life.

Sound:
A straightforward mono mix of the original soundtrack is unremarkable, but consistent. Dialogue is easy to discern at all times, even when there is still some ambient hiss on the audio track. Music can be a bit tinny, as well, but this seems like a symptom of age, not of incompetence.

Extras:
The only extras here are the two introductory sequences for Birth of a Nation that Griffith and Huston shot on the set of Abraham Lincoln. They were attached to the re-release of Nation and used to promote this film's then-upcoming release. If you own Kino's most recent edition of Birth of a Nation, you already have this material as extras on there. (I reviewed the DVD version here.)

FINAL THOUGHTS:
Rent It. Though I am tempted to dismiss D.W. Griffith's 1930 production of Abraham Lincoln outright, I think respect for the people involved and the occasional moments of visual brilliance demand that cinephiles at least give this a peek. Both Griffith and star Walter Huston have done better work, and there are definitely better Lincoln biopics out there, but this Abraham Lincoln still fits in the puzzle of how the 16th President of the United States has been mythologized in motion pictures. Plus, an excellent technical presentation by Kino at least makes it easy to watch, even if D.W. Griffith's Abraham Lincoln is boring to sit through.