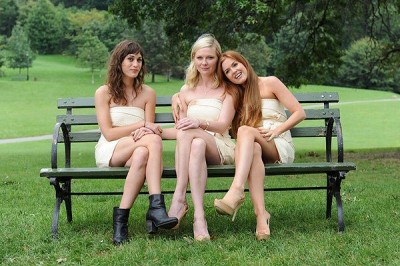 I don't know the story behind Bachelorette or how quickly it got hustled into production after the success of Bridesmaids, but it's a shame this raunchy comedy is going to get stuck with the comparison. It feels hacky of me to even bring it up, I'd more than love to ignore it, but there's a good chance anyone reading this has already made a judgment based on the similarity in concepts, and I want to make sure you people know to just forget that. Because Bachelorette is very funny and entertaining in its own right.

This is the debut feature from writer/director Leslye Headland, whose resume otherwise includes contributing to the brilliant and much-missed television series Terriers. Bachelorette has a pretty simple core plot: four high school friends getting back together the night before one of them is due to get married. The girl lined up for the altar is the last one they thought would get hitched, a strange girl named Becky (Rebel Wilson, who was Kristen Wiig's roommate in Bridesmaids). Becky is overweight and was called "Pigface" in school, and she has a specific place in the catty social dynamic of the quartet, which relies on an ever-shifting pecking order. The girls used to call themselves the "B-Faces," and each comes with their own baggage. Katie (Isla Fisher, Confessions of a Shopaholic) is kind of dumb and gets slutty when she drinks. Gena (Lizzy Caplan, Party Down) is kind of a stoner and has been holding onto the heartbreak of having lost her high school sweetheart. Finally, Regan (Kirsten Dunst, Melancholia, Marie Antoinette) is the control freak. She's also the one who has been closest to Becky in the intervening years, and she takes over maid-of-honor duties, even though she's resentful that she has yet to get married herself.

Katie and Gena roll into town for the wedding rehearsal and bachelorette party, and they're ready to get crazy. When Becky opts out, the remaining B-Faces decide to get sloppy on their own. Whacked out on cocaine, they end up ruining the wedding dress and have only a matter of hours to get it fixed. Things go even further off the rails when they run into the bachelor party, which consists of a guy who has had a crush on Katie since high school (Kyle Bornheimer, You Again), the overly cocky best man (James Marsden, 30 Rock), and Gena's ex, Clyde. He is played by Adam Scott, so Party Down fans should get a kick out of seeing Henry back together with Casey. Caplan and Scott have a good chemistry together, which is aided by the fact that Headland gives them the most developed subplot. Invariably, everyone involved in this crazy night is going to learn something or have some kind of emotional breakthrough. As we get deeper into why Gena and Clyde broke up, Bachelorette reveals an incredible level of pathos. It's not all jokes about semen, strippers, and calling each other the C-word. There's like 30% that's other stuff, too. 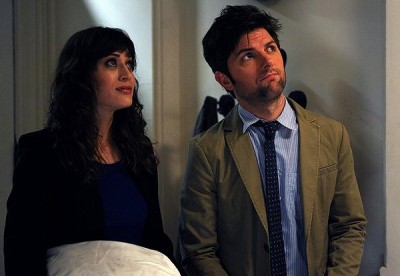 Which maybe isn't enough of a balance. Headland unfortunately skirts around the issues when it comes to the other girls. Kirsten Dunst is excellent as the uptight, take-no-crap Regan. Her part is tough, because she gets few moments to be likable and yet has to hold everything together--both in terms of character and performance. I think Dunst is too often undervalued, so it's always great when someone gives her a meaty role. I just wish the writing had opened Regan up a bit more. There is an excellent scene between her and Marsden when, despite essentially being the villain of the piece, he asks to know why she hates herself. He seems genuinely interested, and as an audience member, I was, too. They end up screwing in the bathroom rather than talking it out.

Isla Fisher's character gets even shorter shrift, despite having the most serious problems. There is a beautifully played scene at the start when Headland lets the story drift with Gena as she gets distracted. Coming back to the present, we hear Katie debating which way she might kill herself someday. Fisher plays it so nonchalantly, it comes off as not just funny, but actually shocking. It's a sinister little set-up for more to come, as the always gung-ho Katie spirals down. It's a comedy, so naturally she gets pulled back from the brink, but the whys and wherefores are never really let into the picture.

It's enough to make you feel guilty for having such a good time watching Fisher cut loose. She is hilarious in the movie, finding an artful balance between innocent curiosity and pure naughtiness. Bachelorette is neither for the meek nor the prudish. The guys from The Hangover couldn't party with these girls. If jokes about abortions and blow jobs and bulimia get your hackles raised, Bachelorette is going to push all your buttons. But if you like to laugh at dark subjects and get a charge out of things so wrong they are funny, then you should be able to enjoy Headland's film for its gutbusters alone. Bachelorette is a solid, tightly edited movie, though I'd have gladly allowed for another half-hour with these gals had it made for a deeper character study. Judd Apatow movies go long, for instance, partially because he makes room for some heaviness alongside the light. Headland had the right ideas and she had right cast to get the job done, and Bachelorette would have been a much better movie had she gone all the way. 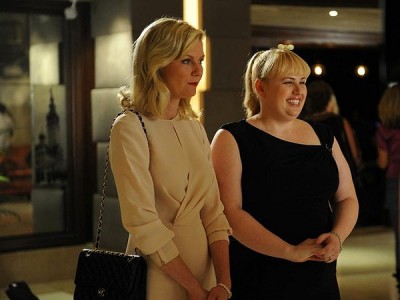