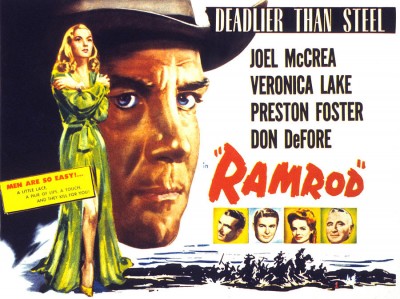 In 1941, Joel McCrea and Veronica Lake were cast as the comic leads in one of my all-time favorite movies, Preston Sturges' Sullivan's Travels. He was the well meaning but blockheaded film director looking to make a socially conscious motion picture about the plight of the disenfranchised; she was "the Girl," a wisecracking would-be actress he found at a diner. Sparks and barbs were soon to fly! Six years later, the granite-jawed leading man and the beautiful blonde teamed again for an entirely different movie: a dark western called Ramrod, André De Toth's cynical take on the white hat/black hat phenomenon. To say that this horse opera placed the stars of that seminal romantic comedy on opposite sides of an ethical canyon would be to put it mildly. He may still be a little bit Sullivan, but she's no longer a girl!

On the contrary, Veronica Lake is all woman. In Ramrod, she plays Connie, the daughter of a wealthy cattle rancher (Charles Ruggles). Daddy has been wanting to marry his heir off to Frank Ivy (Preston Forster), the town's other big landowner and also its biggest bully. Connie has her own ideas. She'd rather marry Walt Shipley (Ian MacDonald), the owner of the Circle 66. At the start of Ramrod, Walt and Frank are at odds over more than Connie's affections. Walt is looking to start raising sheep, a no-no in cattle country where there's open grazing. Sheep eat more than their fair share of grass, which is already in high demand. The showdown between them turns out to be much ado about nothing. Walt caves immediately, leaving town and leaving his ranch to his now jilted fiancée.

Walt also leaves Connie with his right-hand man, Dave Nash (McCrea). Nash stood by the sheepherder because Walt did him a good turn, giving him a job and helping him dry out. Bad memories pushed Dave into the bottle, and good work and the kindness of a good woman, the dressmaker Rose (Arleen Whelan), helped him crawl back out. Dave is reluctant to get involved in Connie's squabbles, but when Frank makes it clear he's not going to play fair, Dave decides to even the score. He hires on his old boozing buddy, Bill Schell (Don DeFore), to act as back-up, but only after the free-spirited hothead agrees to do it Dave's way.

Naturally, Ramrod wouldn't be much of a movie if Dave's way actually worked. It doesn't take long for the waters to get muddy. Lines are drawn and crossed, and everyone is tested to see just how far over them they will step. Bill doesn't like waiting to take care of business, and neither does Connie. She is a femme fatale in sheepherder's clothing, not afraid to use her seductive powers to get what she wants. In fact, it wouldn't be a stretch to call her a femme fatale outright. De Toth, who would later direct the excellent crime pictures Pitfall and Crime Wave, is working territory that is as murky as any film noir, full of dubious motives and double-crosses and more than its fair share of fatalism. McCrea's Nash is the last good man in a bad situation, haunted by his own failures and caught between the dangerous woman who needs him and the sweet lady who is there to dress the wounds her rival inflicts.

It's a pretty great story, full of twists and turns and lots of rotten deeds perpetrated on the sly. McCrea has always been kind of a wooden actor, so he makes for a perfect dupe, always stepping in the wrong cowpie for the right reasons. His delivery and posture is stiff, but I will say this, the man has some intense eyes. There's a scene where he stares down Ivy after the Circle 66 has been burnt down, and though he won't accuse the villain outright, his gaze says everything anyone needs to know. It's a great clip. The contempt practically oozes out of the screen.

And yet, I can't help but think it's the acting that prevents Ramrod from being a great movie. I've spent all night mulling over why I didn't connect with this 1947 production more. The plot is tight and the direction is handled with a journeyman's skill. The more it goes around in my brain, the harder it is to avoid: the pairing of McCrea and Lake lets me down here. I never really felt either of them truly engaged with the material. McCrea's limited faculties are useful putty when in the hands of a sculptor like Preston Sturges, who I think liked the fact that he was kind of an empty shell, a perfect patsy for slapstick; André De Toth confuses the vacancy for stoicism. More disappointing, though, is Veronica Lake, who maybe wasn't the greatest actress herself, but she has a kind of indefinable charisma that makes her more than watchable. In her noir films with Alan Ladd, such as This Gun For Hire and The Glass Key, she effects an inviting persona, becoming the gal you most want to be around; in Ramrod, she is more bottled up, and her performance ends up feeling more like a put-on. Her seduction scenes are the worst. Like you're watching a woman who only learned how to catch a man from...well, from watching Veronica Lake movies.

This shouldn't be enough to steer you away from Ramrod. Even with these failings, this is a solid western that has a complicated enough plot to keep any viewer interested. The failings of the leads are also made up for by a more than capable supporting cast. Don DeFore is great as the devilish sidekick, and Donald Crisp has a brief but memorable turn as the town sheriff. His interplay with McCrea shows how a good acting partner can draw something out of even the most stuffy performer. The script accumulates a lot of blood and gunfire as it progresses, and it builds to a satisfying climax that doesn't cheat its way out of the tough corner De Toth has painted everyone into. Instead, the film comes out swinging, pushing its hero past his equivocating and into a more direct role, and making sure the right people get what's coming to them.

Video:
Olive Films delivers another well-done transfer of a lesser-known older film. It's a full frame, 1.37:1 black-and-white image, mastered for high-def in 1080p. Good chunks of the movie look excellent, with little by way of damage to the print and a clear picture. Blacks are decent throughout, if not overly solid. On the downside, there are definitely some spots where the film is marred by hazy reproduction and scratches and dirty on the source. Edges of the frame can go a bit liquid, and overall the underlying image can grow a bit strained. Even so, the good outweighs the bad. The majority of the transfer looks fine, and so the isolated problems do pass.

Sound:
On the other hand, the lossless mono soundtrack has no problems whatsoever. Everything here is in the right place, with a good emphasis on dialogue and excellent rendering of sound effects and music. I detected no extraneous noise or hiss, no glitches whatsoever.

FINAL THOUGHTS:
Despite its problems, Ramrod is definitely Recommended. Western fans will enjoy André De Toth's complicated plotting and his dissection of traditional good vs. bad roles. Veronica Lake and Joel McCrea star in this late-40s genre picture as a lady rancher and the man she's hired to run the operation. Both are pushed up against it in terms of social perception--she's a woman, he's a drunk--and both have their reasons for wanting to fight back, though with a completely different code of ethics. The script here is structured like a good noir, and there are lots of twists and turns on the road to the resolution. The only downside is that the lead actors never quite get into all the gunplay and scheming with the vigor one would expect, meaning that Ramrod narrowly misses being the classic it could have been.