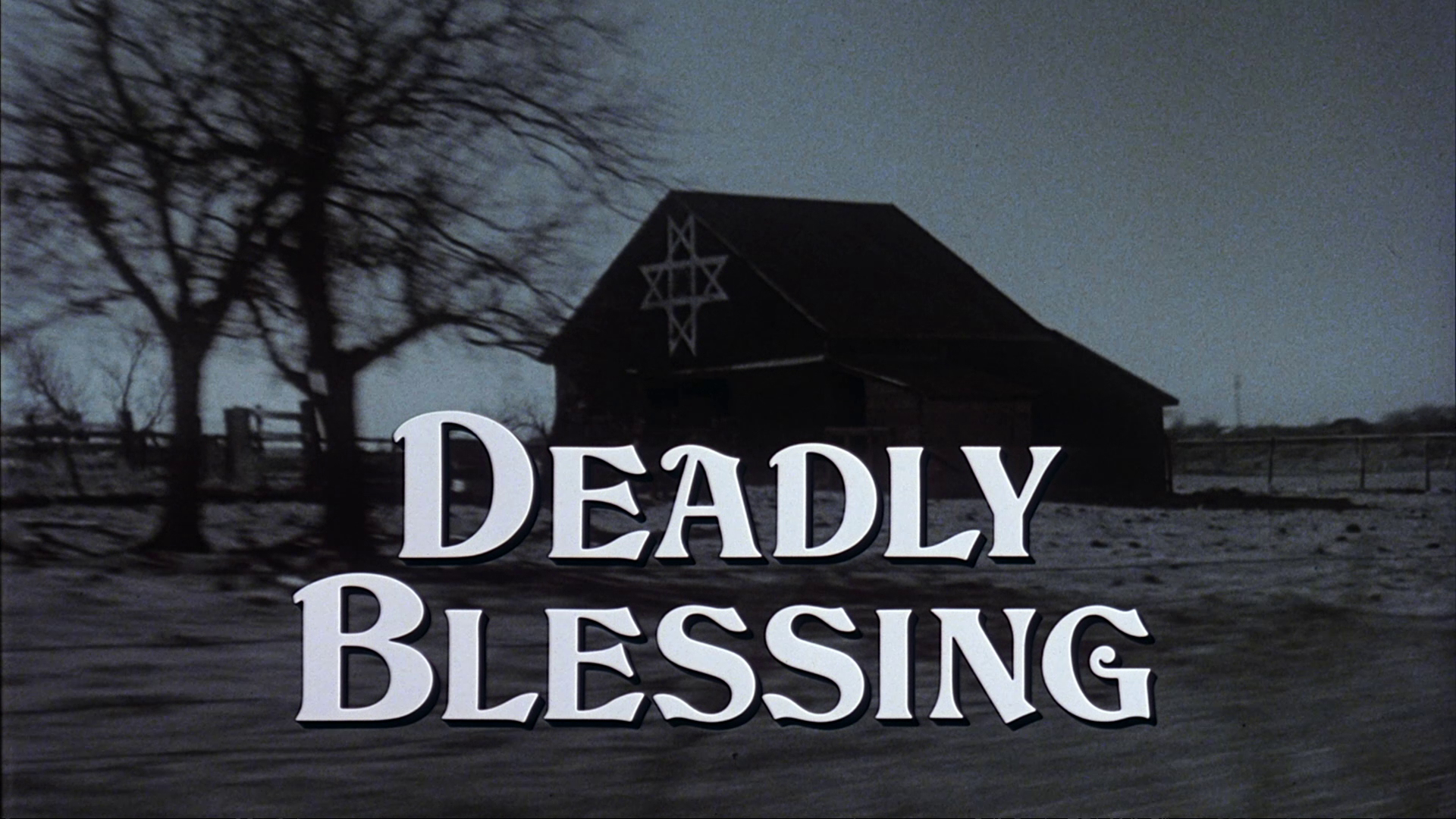 A few years after Wes Craven directed The Last House on the Left and The Hills Have Eyes but before his big breakout, A Nightmare on Elm Street, he made Deadly Blessing, which is more interesting as a precursor of what's to come than an effective horror film. When an excommunicated member of an extreme religious community is killed in a freak accident, his young wife is left to fend for herself as strange things start happening around her farm. Maren Jensen is an attractive screamer, and an icy hot young Sharon Stone joins her in terror. Deadly Blessing is kind of stupid, not very scary and runs too long at 100 minutes, but Craven exhibits the same knack for framing and scene staging that would serve him well in later films. This is another release from Shout Factory!, which continues to churn out high-quality Blu-ray releases of cult films. As a fan of '80s horror, their efforts are appreciated, and many of you will enjoy checking out this early effort by one of the genre's legends.

Jim Schmidt (Douglas Barr) resides on the outskirts of the Amish-esque religious community to which he used to belong. One night, Jim is run over by his own tractor, and his pregnant wife Martha (Jensen) is left on the farm alone. Members of the "Hittite" community won't speak to Martha, and only her chatty neighbor, Louisa (Lois Nettleton), and her daughter, Faith (Lisa Hartman), can be bothered to converse. Louisa confides in Martha that a mentally handicapped Hittite named William (Eyes' Michael Berryman) has chased Faith around and called her "the Incubus," which is a demon that steals women's innocence. Soon after, things begin going bump in the night, and a frazzled, grief-stricken Martha calls friends Vicky (Susan Buckner) and Lana (Stone) for company. 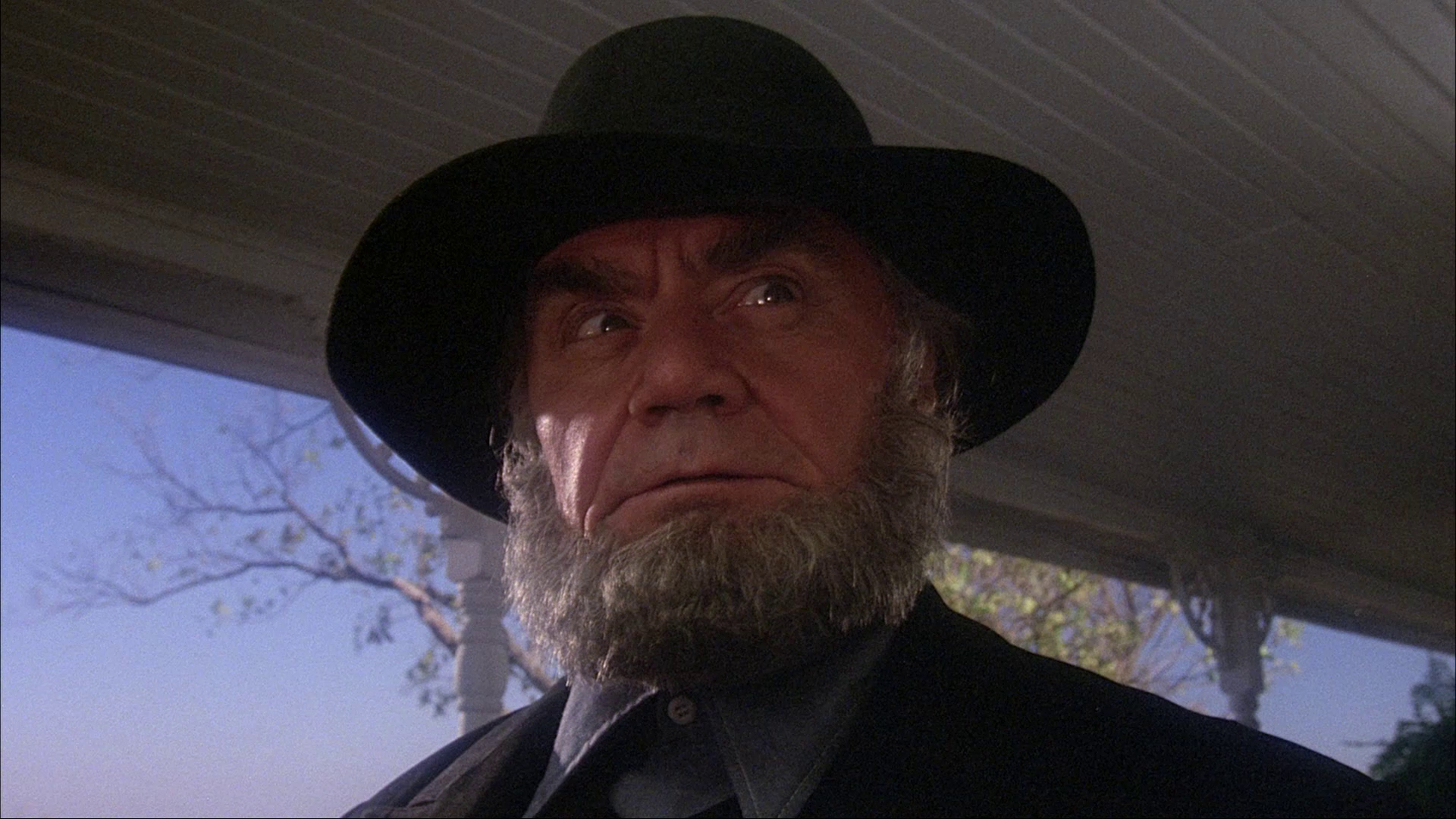 Deadly Blessing is full of creepy crawlers like spiders and snakes, and features quick bouts of violence. There's not much to the story, but subplots involve Vicky's forbidden flirtations with Hittite John Schmidt (Jeff East) and Martha's feud with Hittite leader Isaiah Schmidt (Ernest Borgnine, who "won" a Razzie for Worst Supporting Actor for his work here). Deadly Blessing is very much a 1980s slasher, complete with a bunch of random scenes meant to mislead the viewer, some gratuitous nudity, stellar acting, and an over-the-top final reveal.

The biggest problem with the film is that it's not very interesting. That, and it's pretty obvious what is causing all the ruckus well before the climax. I won't even address whether or not Deadly Blessing gives religious communities a fair shake, as that is irrelevant. I did enjoy Stone's performance, and her smoky gaze seems to suggest that she did this for a paycheck. A girl's gotta eat, right? Wes Craven is a great horror director, and there are some signs of life here. A few of the kills feel like early versions of more memorable deaths from his better films, and I'm pretty sure he reused an effective staircase tracking shot later in Nightmare. I'm glad forgotten horror films like Deadly Blessing are finding a place on Blu-ray. It's not the best example from the early '80s trough, but Deadly Blessing is an interesting minor work. 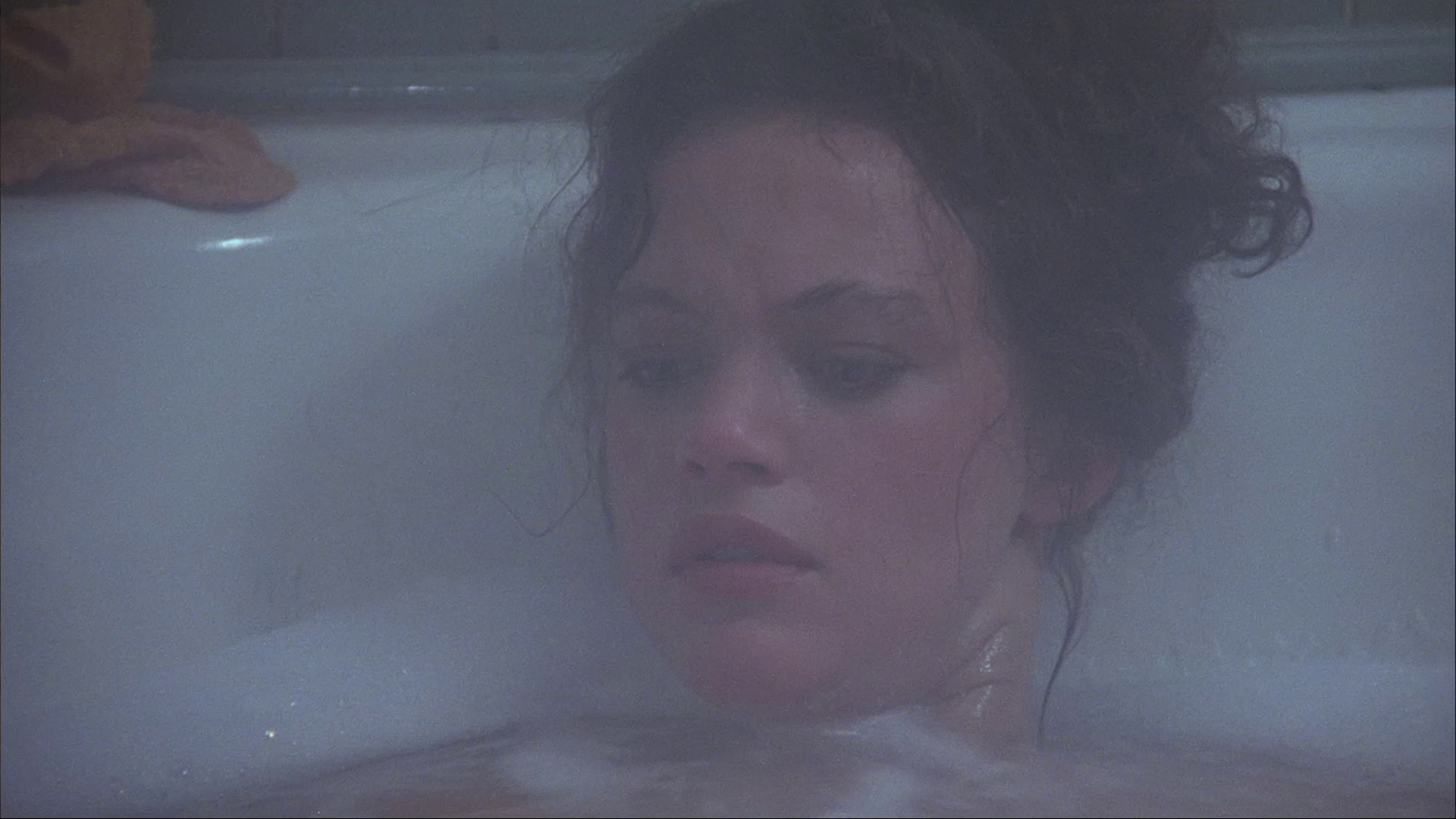 Shout Factory! continues to churn out strong transfers. I'm not sure if they did any restoration on Universal's print of the film, but the 1.85:1/1080p/AVC-encoded transfer looks pretty good for a 32-year-old, low-budget shocker. There is some noticeable print damage, particularly in the opening scenes, but it's not too distracting. Detail and clarity are surprisingly good; just check out all the facial detail in the scene where the three ladies are talking in the living room. There's a bit of softness in the image, likely present in the source, and I suspect there's a bit of noise reduction and edge enhancement baked into the master used. This is never a huge problem, and the image retains a nice, film-like appearance with natural grain (which is heavier in nighttime scenes). Black levels are fairly good, though there's some moderate crush, and skin tones are natural.

The 5.1 DTS-HD Master Audio soundtrack is mostly front-loaded, but it sounds about as good as I'd expect from a 1981 film. Dialogue is clear and layered nicely with effects and score. There's some light surround play during the action scenes, and the score is moderately deep. There are no major problems with hiss or feedback. An English 2.0 DTS-HD Master Audio track is also included, as are English subtitles.

This "Collector's Edition" from Shout Factory! arrives in a standard Blu-ray case, which is wrapped in a slipcover. The main artwork is reversible; the outside features a newly created illustration, while the inside sports the original poster artwork. There are also a number of well-produced extras that provide a wealth of information about the film: In the Commentary with Wes Craven and Writer Sean Clark of "Horror's Hallowed Grounds", Craven discusses all aspects of the production, from casting to filming to creating tension. Craven is always an enjoyable listen, and it's great to hear all of his anecdotes, film-specific and otherwise, on this track. Say Your Prayers! (14:13/HD) is a brand-new interview with Barryman, who played Pluto in The Hills Have Eyes. He discusses his overall work with Craven, the way he chose to play William in this film, and expresses admiration for Sharon Stone's long career. Apparently, the actor had to alert Craven when some of the leading ladies started fighting behind the scenes! In Secrets Revealed (13:05/HD), Buckner says she liked her role because she was the "sensible" one. She also reveals that a "stunt booby" was used for her sex scene. Creature Designer John Naulin says in Rise of the Incubus (6:40/HD) that the studio wanted a bigger kick at the end, thus creating his involvement with the project. Naulin worked on many horror films of the era, and his company made most of its own masks and creatures. So it was Written (20:33/HD) is an interview with writers Glenn Benest and Matthew Barr, who discuss the parallels between horror and the repression of secrets by the religious community in the film. Finally, you get the film's theatrical trailer (2:31/HD); some TV Spots (1:37/HD); Radio Spots (2:35/HD); and a Photo Gallery (0:57/HD). 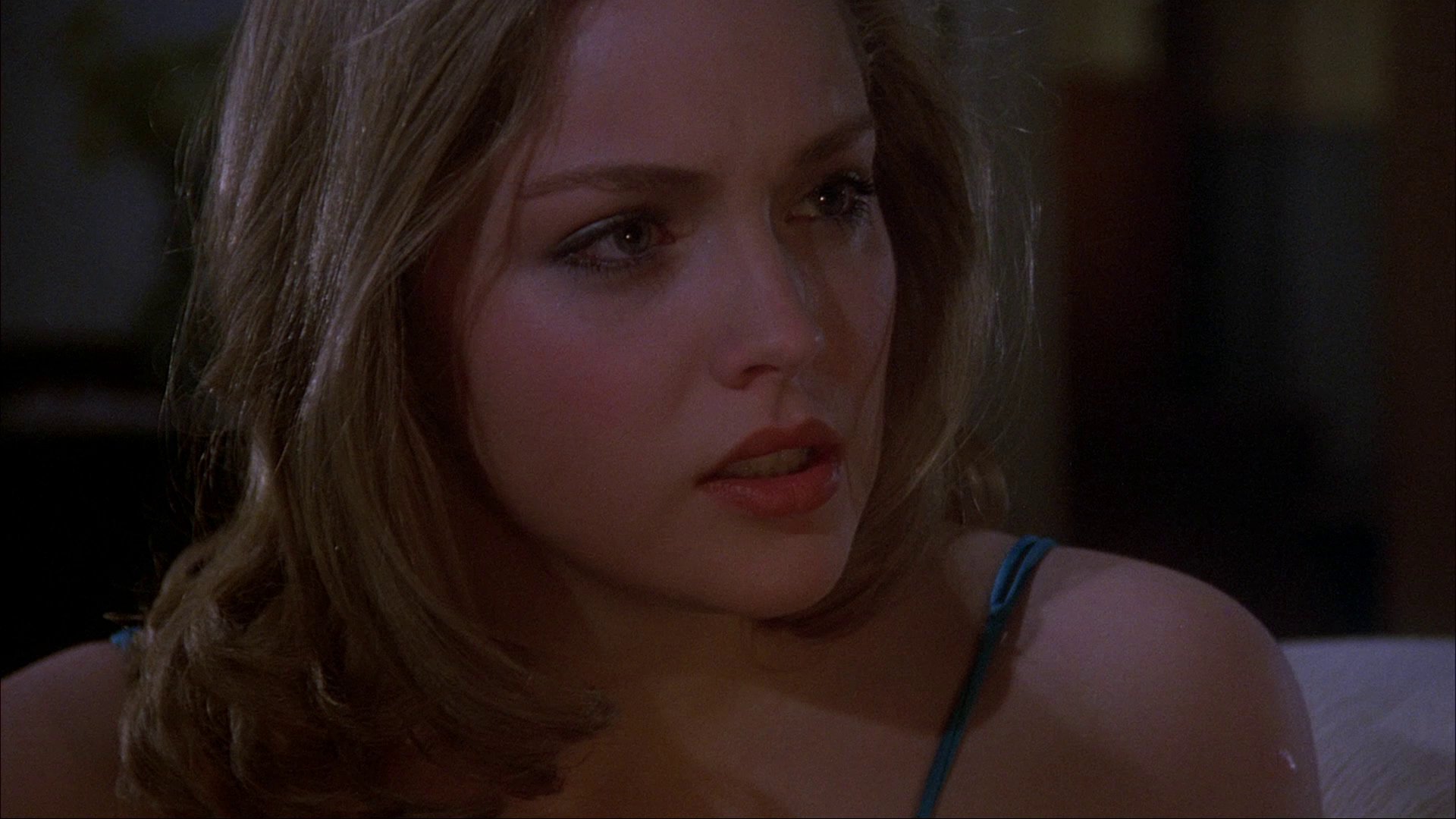 Before he hit the mainstream with Nightmare on Elm Street, then cult director Wes Craven made this lightweight horror film about a woman terrorized outside a religious community. Deadly Blessing is '80s slasher cheese through and through, and lacks the tension, jolts and humor of Craven's better films. Nevertheless, there are signature Craven elements here, and, for fans of '80s horror, this disc is recommended on the strength of Shout Factory's expansive bonus features. Recommended.