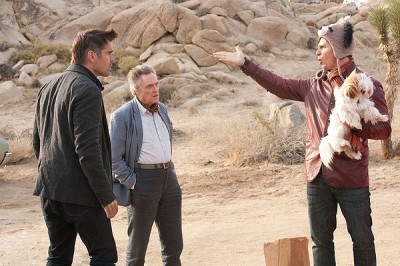 If your problem with Adaptation was that it was too cerebral and didn't have enough of Donald Kaufman's side of the story, then Martin McDonagh has made the film for you! And one I liked a lot, let's not get it twisted, but I'm kind of unsure which way the eyebrow is really supposed to arch. Is the writer/director of In Bruges maybe trying a little too hard to have his cake and eat it, too? Or, like Spike Jonze, is he sticking a frosting-covered finger in the eye of the big machine?

Colin Farrell leads the film as Marty, an Irish immigrant working as a writer in Hollywood. Marty owes his agent and producers a screenplay called Seven Psychopaths. The only problem is, he's only got one idea for one psychopath, and that turns out to be a real dude his friend Billy Bickle (Sam Rockwell's nod to Taxi Driver?) told him about when they were drinking, a fact that Marty blacked out. Billy is an actor and a bit of a nutjob himself. He and his partner Hans (Christopher Walken) kidnap people's dogs and then pretend they found them when the owners offer a reward. It's a good scheme, until Marty gets ahold of a shih tzu belonging to a mafia man. Charlie (Woody Harrelson) has one weakness, and that's his dog. Blood will be shed getting the pooch back.

The course of Seven Psychopaths is set by Marty, Billy, and Hans spitballing about what Marty's movie-within-the-movie should really entail. As they do, Marty realizes that his friends are not on the up and up, and the stories they spin might not be entirely imagined. Billy dreams of a grand shootout in a graveyard, a bloody last stand among the headstones, and though this doesn't entirely come true, he does maneuver everyone into the desert for a possible showdown. A lot of what happens is what the guys tell you will happen, but always slightly off the mark, which is part of the joke. What they imagine is what happens in movies, and this is real life. Except it's a movie. May the meta circle be unbroken.

Most of Seven Psychopaths is a quite a bit of fun. McDonagh writes great dialogue, and he has a pitch-perfect ear for black humor. Colin Farrell, Sam Rockwell, and Christopher Walken are an incredible trio, all working in tandem and providing a different element essential to the larger narrative. Farrell is the panicked straight man, while Rockwell is gleefully unhinged. Walken travels down the middle, keeping it cool even as he falls off his rocker. There are also great cameos by Tom Waits, Harry Dean Stanton, and the ever-menacing Zeljko Ivanek (you don't know his name, you've seen his face) as Charlie's right-hand gunman. Ladies are virtually nonexistent in the goings-on, as they only serve to impede the macho male fantasies. McDonagh kind of almost gets himself off the hook by inserting a soupcon of self-critique regarding how bad he is when it comes to writing women, but it's still no excuse to waste both Olga Kurylenko (Quantum of Solace) and Abbie Cornish (Bright Star), particularly when it's not long after this self-reflexive joke that the writer/director sends Cornish into her final scene wearing nothing but a white T-shirt. In a rainstorm. You can blame it on your character, dude, but this is really your fantasy, not Billy's.

Which is really indicative of why Seven Psychopaths is maybe a little out of tune. I don't think McDonagh is getting away with as much as he thinks he is. Sure, he's tossing us a very big wink about how dumb a lot of action movies can be, but he's still making an action movie. Unlike Spike Jonze and Charlie Kaufman, he's not really pointing out the error and correcting it, he's using it as a justification for doing it anyway.

Lucky for him--and for us--that he and his cast are having such a hoot. For whatever else Seven Psychopaths may want to grow up to be, what it is now turns out to be an hilarious romp delivered as a visceral rush of verbiage and blood. Sure, it takes a good half hour or so to really get revved up, and sometimes the talky parts can sag, but it all ends up being worth it once McDonagh gets where he's going. (And don't rush out of the theater too fast; the credits interruption makes for a great tag on the whole thing.) I don't know. Maybe had the film been slightly more demented or even more egg-headed, Seven Psychopaths might have been more successful or even more special. Still, there are worse sophomore slumps to be had, and for all of its problems, McDonagh still delivered a mostly excellent follow-up to his killer debut. 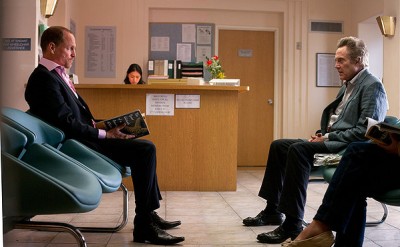