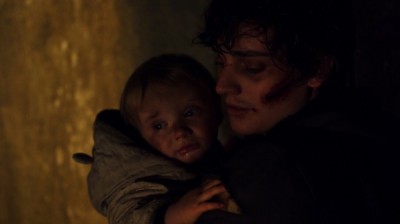 Between The Raid: Redemption, Dredd 3D, Attack the Block, and now Ciaran Foy's Citadel, I'm not getting a very good feeling about the safety of apartment block buildings overseas. In the jostling opening sequence of Citadel, a young man named Tommy (Anuerin Bernard) and his pregnant wife are moving out of their decidedly sketchy-looking building, but not quite quick enough; the missus is attacked by a mysterious--but scary--gang of hooded figures, and though doctors manage to save the baby, the mother is not so lucky.

Nine months pass. The harrowing experience has left the newly single father understandably shaken; he now suffers from a serious case of agoraphobia, which he's attempting to work through with the help of a kind therapist (Wunmi Mosaku). But how much of his dark, grim, perpetually overcast existence is in his head? He couldn't actually be seeing those same dark figures trying to break into his home and kidnap his child... could he?

Citadel is a film that shifts gears sharply but never clumsily, gingerly skipping from drama to horror to introspection. There's a quiet sadness to the scenes that establish Tommy's new, muted life (they're somewhat reminiscent of similar early sequences in Soderbergh's Solaris), and his descent into madness is played subtly, patiently. Indeed, the picture may require more diligence from audiences than they're accustomed to affording a genre picture--it's the kind of horror-movie-as-chamber-piece that legitimately recalls something like Repulsion.

Barnard's work is understated and effective--he anchors the film well--but the scene-stealer is an actor named James Cosmo, who could find himself a very decent living doing all the Brian Cox roles that Brian Cox doesn't have time to do. He plays the foul-mouthed local priest who ends up bullying Tommy into action ("What would you have done to protect your wife?" he demands), and he miraculously manages to make the guy both darkly comic and utterly horrifying at the same time.

The claustrophobia of Foy's narrative sometimes slips into monotony, and while I'm all for the creepy power of darkness, there's a bit too much peering into the muck, trying to figure out what the hell is going on. But it's a thankfully restrained film, with most of its violence occurring either at a distance or just out of frame, and it's so quiet and contemplative that when the shocks arrive, they've got an extra punch to them. Citadel is perhaps a bit more deliberate than domestic horror fans prefer, but it's serious-minded, frequently unnerving, and moody as hell.