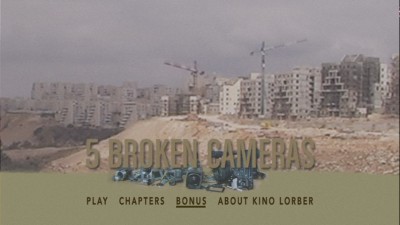 I know it's hip to bag on the Oscars, but every year, they throw a spotlight on at least one film that maybe I hadn't noticed before, and for whatever you want to say about the ceremonies or the choices of the Academy, those discoveries make it all worth it. This year, the film I might have otherwise never seen is one of the best documentary nominees, a first-person account of the ongoing struggles in Palestine called 5 Broken Cameras. It's a film that is difficult to take at times--injustice is sickening to watch--but its unyielding point of view is one of the truest validations of cinema I've seen in a good long while, if not ever.

The premise behind 5 Broken Cameras is amazing all unto itself. In 2005, a farmer named Emad Burnat bought a video camera to document the birth of his fourth son. Emad and his family live in a small village on the West Bank called Bil'in. They live within spitting distance of Israeli territory, a division that creeps ever closer as the settlement on the other side of the line expands. Over the next five years, Bil'in becomes the center of Palestinian protest. In that time, a fence is erected, people die, land is lost, and yet, the influence of the small group of peaceful demonstrators grows faster than the army can build its barriers.

There to film it all is Emad, embroiled in the struggle, affected by the violence, and himself in harm's way. The movie's title refers to the quintet of cameras Emad lost between 2005 and 2010, one a year for five years. At least two are destroyed by taking a direct hit from a bullet, another is hit by a bouncing gas grenade, and one is smashed by an angry settler who asserts his alleged rights with his fists. Over this period, Emad sees his friends and family arrested, films one of them being shot, and nearly loses his own life in a driving accident. He often questions whether the filming is doing enough or even if maybe it's too much, drawing attention to himself and his loved ones. Is it worth the effort it takes to keep acquiring new cameras? Emad has no money, Bil'in has no department stores. The only answer that keeps coming back is to carry on, to keep documenting, one day this will be important.

And so it goes that eventually Emad Burnat gave his footage to Israeli filmmaker Guy Davidi, who assembled it into a journalistic narrative. Together they added Emad's narration, explaining what he felt and what he saw. Most touching amongst the many things we witness is the growth of that youngest son, and how the child is quickly pulled into the political turmoil that rages all around him. There is a heartbreaking moment when Emad has to try to convince the child of the virtue of nonviolent protest even in the face of meaningless death. How the boy sees everything becomes analogous to how his dad films everything: to turn away is to allow the brutality to exist unchallenged. 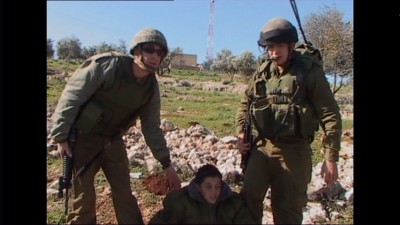 Much of the footage in 5 Broken Cameras is damning. The harassment and the reflexive violence the people of Bil'in endure from the Israeli soldiers and the West Bank settlers is stomach churning. There is little defense to be made for armed men hiding behind riot gear and shields and responding to thrown rocks with grenades and rifle fire. In one of the more astonishing periods of conflict, the army regularly rolls into Bil'in in the middle of the night and arrests children who aren't behind closed doors. The village's response? The kids all gather together and march on the fence, chanting, "Let me sleep!" Is there a more fundamental violation of basic human dignity than this? Later in the film, a boy who is barely in his teens is pushed back by armed soldiers while his dad is being arrested. Defeated, the boy sits down between his tormentors. His face tells you everything you need to know as to why the cycle of violence goes unbroken, despite the noble efforts of people like the boy's father or of Emad.

While 5 Broken Cameras doesn't dig as deeply into the Palestinian side of things, there isn't much love lost between Emad and his government or the greater movement. Politicians use his people for photo ops, and then abandon them when they need help. If there is an imbalance in terms of criticism, it's because those people are never around, the Bil'in village is left to fend for itself. The politics on display are, by and large, the politics of the personal. The protesting villagers have been removed from their homes and had their crops destroyed, and then been gassed and beaten for daring to complain. Emad is pushed toward many a precipice, and he gazes into more than one abyss and questions what it's all for. One gets the sense that if he could see any other way out of it, he would take it, but until that opportunity presents itself, this is his destiny: to push on and keep making sure as many people as possible see what is really happening.

I'll admit, there is a certain guilty irony to watching 5 Broken Cameras from the comfort of my home, my phone nestled in my pocket--a phone that can turn into a video camera and then immediately upload the footage to the internet. Emad Burnat could only dream of having access to that kind of technology. This shines a light on what was so inspiring about the Arab Spring, and what was so frightening to the powers that be. The role of social networking and of compact communication devices changed the nature of the game. Even so, Emad Burnat's efforts may be the greater lesson here, because he is the living image of a citizenry that will not back down, whether easy or hard, until they are treated as they know they should be. If he can keep doing it even when it's so difficult, then those who have it so easy have no excuse. 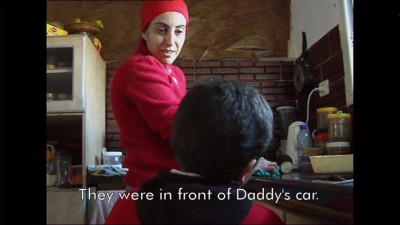 Video:
5 Broken Cameras was most likely quite a challenge to master. The footage comes from multiple sources, some of it taken under less than ideal circumstances; yet, this DVD release does a good job of establishing a standard of picture quality and maintaining it. Jagged lines and other resolution problems appear to be a byproduct of the source and not of the digital authoring, and the DVD producers create a stable image that is nearly seamless, even as we leapfrog through the years, from one of Emad Burnat's cameras to the next.

Sound:
The original soundtrack is in both Hebrew and Arabic, and it's mixed in stereo for the final film. The audio is solid, given a nice center, pumping up the live vocals so that they are easy to hear while also maintaining the natural sound effects. No grandstanding here, the message is sent right down the middle.

The English subtitles are very good, even when the audio can be chaotic. Smart choices are made to translate what is necessary when a chorus of voices might otherwise drown it out. The subtitles are burned into the picture and cannot be turned off.

Extras:
The film-specifics extras begin with the theatrical trailer.

There are separate interviews with co-directors Emad Burnat (8 minutes) and Guy Davidi (15 minutes), each talking about their backgrounds and the nature of this production. These are in English.

Davidi's 2010 documentary short Keywords (23 minutes) is also attached. The piece is about how the journalist Gideon Levi inspired a then-new stage production. The documentary isn't entirely successful, as it seems to presuppose the audience's knowledge of the subject. I got some sense of who Levi is from it, but not much of a clear concept of the whys and wherefores of the play. The playwright never really explains his "keywords" concept, and so it comes off as so much pretentious gibberish. Then again, his Chairman Mao T-shirt probably says more than he ever could about the fellow's anarcho-punk semiotextual intentions (<--- keywords!). 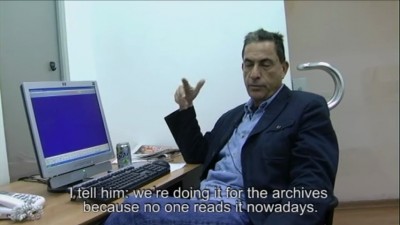 There is also a near-10-minute promo piece about the Greenhouse program, an initiative to provide an outlet for new documentary filmmakers around the world. I hadn't heard of this before, so it's actually pretty fascinating.

FINAL THOUGHTS:
Highly Recommended. A rare glimpse into a world rarely covered by other media, 5 Broken Cameras is a thought-provoking personal diary from the Palestinian side of the West Bank barrier. Shot between 2005 and 2010 by Eman Burnat, a poor farmer in Bil'in, the movie tracks the growing non-violent protest movement, paralleling it with the early years of Burnat's youngest son, and building the narrative structure around the five different video cameras the activist acquired and lost in that timeframe. It's a powerful individual statement that blossoms into a more encompassing view of the Palestinian citizens and the good people being hurt in the ongoing turmoil. It will definitely challenge your perception of the conflict, and also make you both love and hate your fellow man in equal measure. Our capacity for good and strength is only matched by our tendency for selfish cruelty. Ultimately, the film is hopeful, because even if it had failed to communicate anything else, at least 5 Broken Cameras gives us the image of one man fiercely maintaining his dignity. 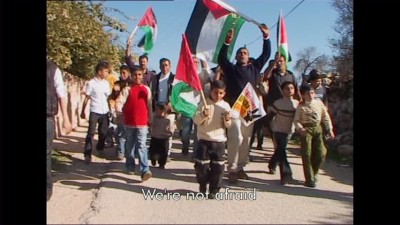