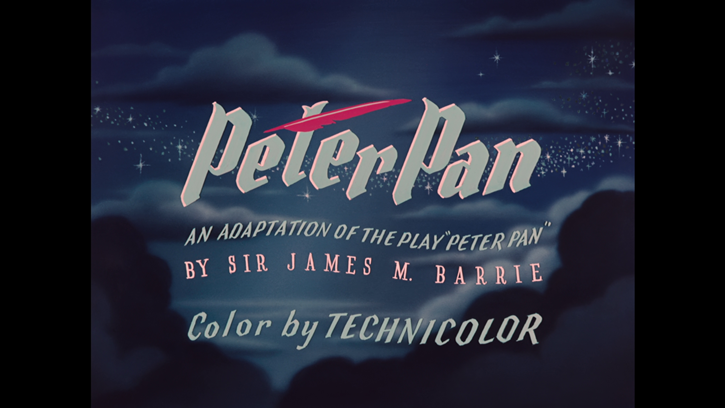 Peter Pan is one of the best of Disney's classic animated productions. The film feels "timeless" in many regards and is one which can be easily revisited time after time again (and with close ones; family and friends). The film was an incredibly ambitious project for Walt Disney. The project has remained one of the most essential films in the entire filmography of Disney as a company and it is still well worth remembering, enjoying, and sharing as a simple story that overturned and transcended its simplicity at every turn.

Peter Pan, a young storybook character from the magical "Never Land" comes to visit Wendy and her young brother siblings (along with Tinker Bell, the fairy who provides "a little bit of Pixie dust" that allows the characters to fly as the story progresses). The young children that cherish the story of Peter Pan are told by their parents to "Grow Up!" and to essentially stop listening to a story of adventure and far-away lands.

Yet the children loved stories about the adventurous and good-hearted boy who "wouldn't grow up" named Peter Pan. Upon hearing about the notion of growing up being presented to them, it frustrates Peter and he decides to take them with him and Tinker Bell to Never Land, where he promises the children that no one would ever have to grow up there. The only problem is that soon they will all face the wickedness of the mean-spirited Captain Hook, a vengeful pirate determined to kill the spirited Peter Pan. 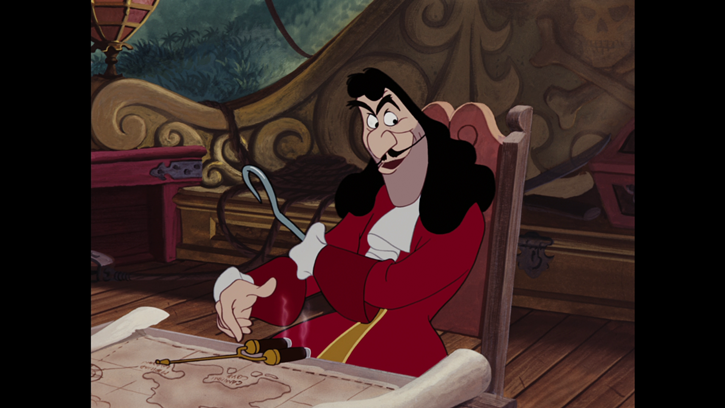 What will happen to Wendy and her siblings? Can Peter Pan defeat Captain Hook? These are the main narrative questions (though the big, relevant, and essential idea of the film is to ask what it means to grow up and what this has to do with the power of imagination).  The adventure begins and further ensues in this strange land of children's tales come to life in animated magnificence brought to the world from the geniuses at Disney studios.

Peter Pan was made, in part, to remind both young and old of a specialness that is found with childhood, with imagination, and with the vibrancy and wonderment of life as seen from the viewpoint of a sweet-natured child. Peter Pan is about the imagination and spirit of children. Disney was always a child at heart himself and someone who "didn't want to grow up". He constantly dreamed big dreams and worked hard to make those become realities that could impact the dreams of children and adults everywhere around the world. He believed in his medium. Disney always held true to his belief in the art found in animation, and he was a genuine storyteller with a clear understanding of his craft.

The entire idea to make the film was something that he carried with himself from an early age. I suppose it probably began to formulate as an idea when he was read the story of Peter Pan. Perhaps it also had something to do with his performance as Peter Pan himself in a young children's school play. Regardless of the specific moment in which one would argue this adaptation was truly conceived, Disney waited many years before bringing this idea into production. He wanted to wait for the artistic capabilities and technologies to improve in capability before attempting to produce what was one of his most personal projects. The determination to wait for the "right" time seems to have paid off because the artistry the filmmakers display is remarkable indeed.

Everyone who worked on this remarkable animated production helped to make Disney succeed in bringing his creativity and ambition to the forefront regarding the creation of a successful adaption of Peter Pan. The final effort is a reflection of Disney's inventiveness and of the immense skill of everyone he worked with at his company. 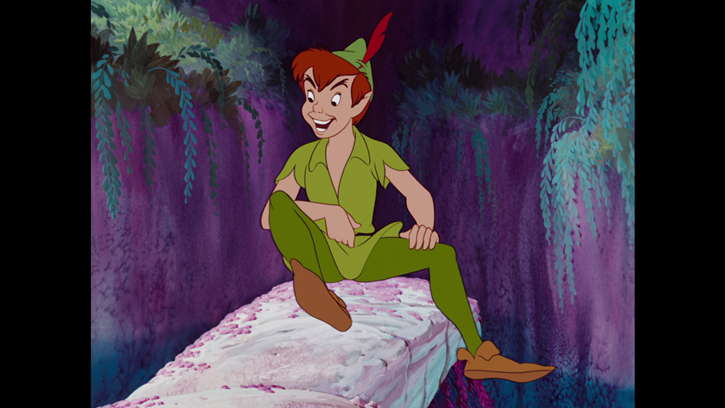 If there is anything to criticize about this film, it's the stereotypical and racist depiction of the Native American Indians in the film. The film is unfortunately a product of its time and when Peter Pan was made there was a lot of racism in film in how Native Americans were depicted: Disney productions included. A conversation with children who have yet to experience Peter Pan would be a worthy endeavor for all families to partake in.

The animation is breathtaking, even today, and the artistry of the animators who worked to make Peter Pan an animated sensation did a splendid job. The character designs are unique, the layout designs beautiful, and there is a real sense of energy and motion in the way the animators made the characters interact. One has only to look at Peter Pan, Wendy, and company flying through the air to see one of the most spectacular wonders in animation. To realize that the film has a surprisingly multi-faceted approach to landscapes and far-away wonders of Never Land is an important step in recognizing the full artistry of this production.

In a way, it makes perfect sense that Disney would want Peter Pan to be one of the crowning achievements in animated filmmaking. The project was a favorite of his from childhood, but something about it speaks clearer to the ideas of a Disney film than anything else ever made from the company: the spirit of youth, of adventure, of creativity, of believing in something outside of the "ordinary", and of the flight of an imagination. It's an animated masterpiece. 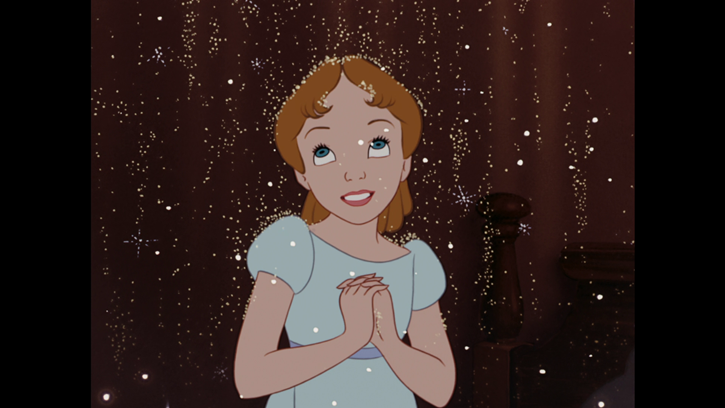 Peter Pan has been a subject of controversy for years now with regards to its home video DVD presentation. I hoped that some of the issues that caused the problems with the Special Edition DVD edition would be rectified for this High Definition Blu-ray release. Unfortunately, that's not the case. The color-timing and actual colors have been altered somewhat from the original form. Some elements are intact while other moments demonstrate Disney altering animation a number of hard-working animators worked to create when the film was originally made. This was likely done to try and modernize the art style, but it essentially robs the film some of its original artistry and it's disappointing and disrespectful to those involved in animating it. It definitely doesn't make this an entirely authentic presentation.

Disney should have gone back and provided us with the film with the entirely intact original animation. Unfortunately, the company has not done so. It appears they want to stick to the newer colors seen on the Special Edition DVD.

Grain was removed from Peter Pan as well. This may have had a slight impact on the softness level noticeable in select scenes. Many viewers will be much more appreciative that the film appears smooth in texture than to find film grain left intact. In fact, this doesn't bother me anywhere near as much as the digital tinkering to the original animation color-schemes.

On a technical level, the Blu-ray appears to be almost flawless but film fans who consider themselves film preservationists will be disappointed that the film hasn't been given a faithful presentation. I am giving the video score a lower rating as a result.

The 7.1 DTS-HD Master Audio presentation is amazing for the most part. It's surprisingly brilliant as a sound mix considering the fact that this is just a new mix utilizing old sound elements which are clearly dated. Some elements to the sound design still sound, well, as someone would expect for a film of its age.

However, the dialogue is mostly crisp and the soundstage is active and engaging without sounding as if it was tampered with. This was an impressive effort by Disney to make an engaging new mix with modern technology.

The mono presentation found accompanying it's theatrical release has also been included. However, Disney has only included it with lossy Dolby Digital encoding technology. The presentation could have benefited from a high-resolution presentation and it's a let-down (however unsurprising) that Disney did not bother to do so. 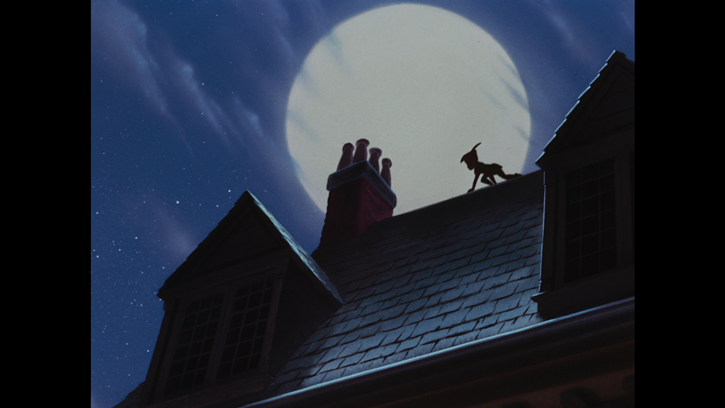 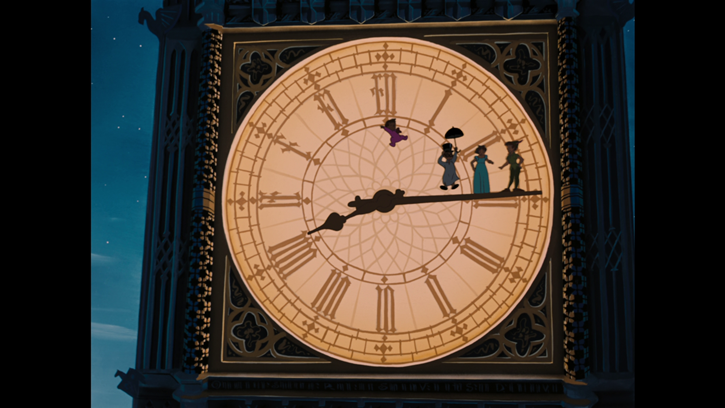 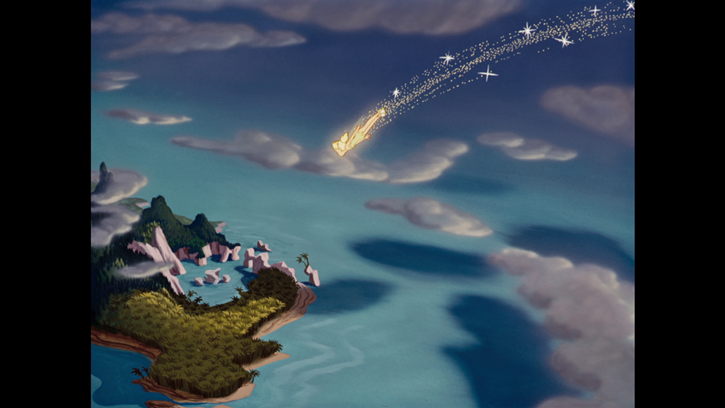 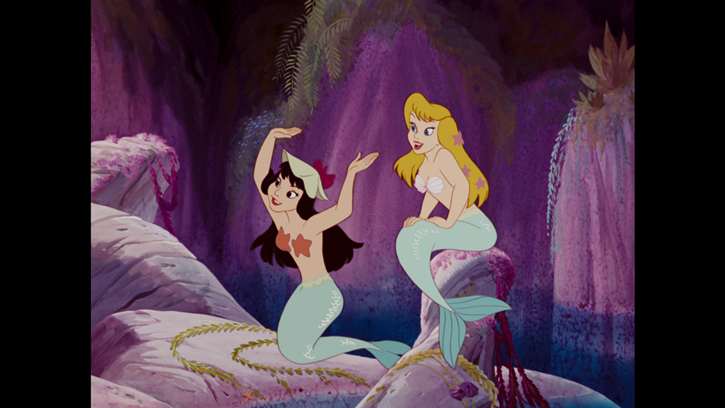 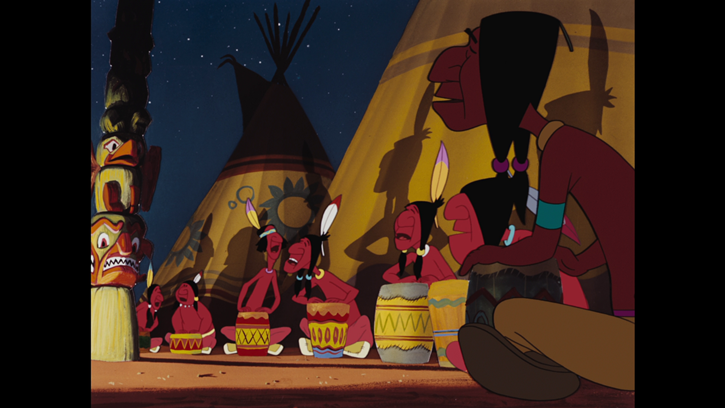 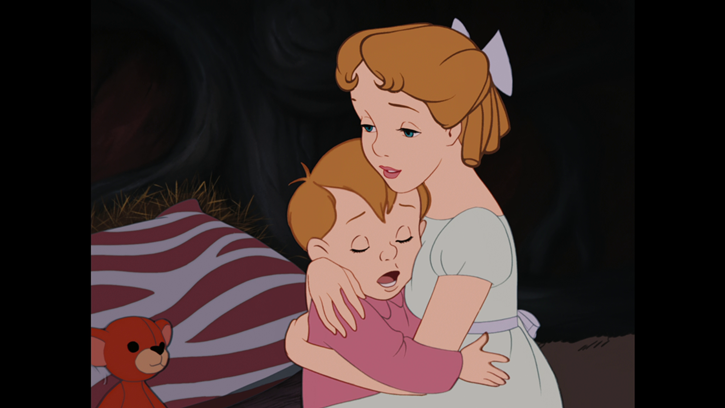 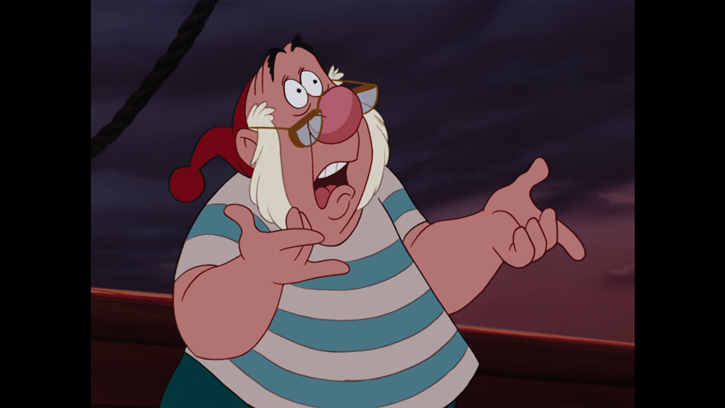 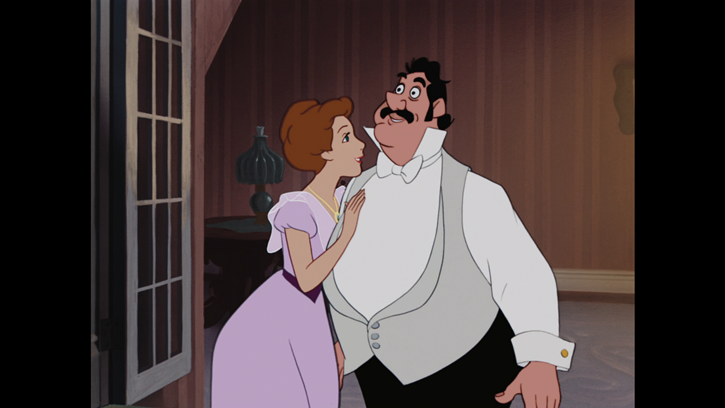 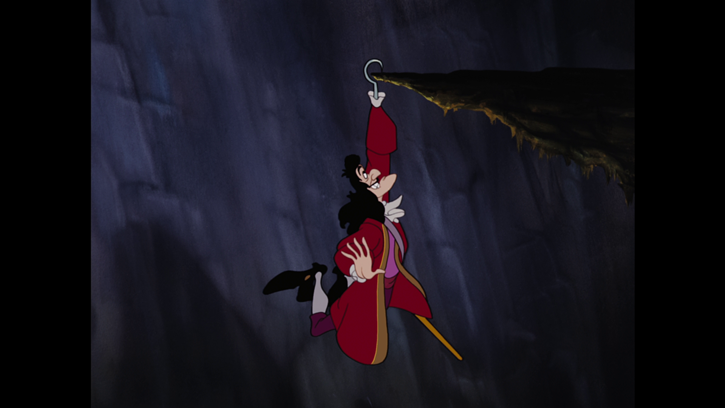 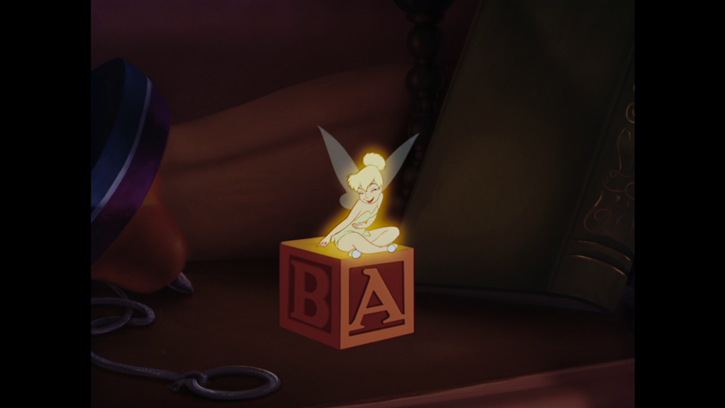 The new video supplements are provided entirely in High Definition. Previously existing DVD supplements are also provided on this release (mostly in standard definition) although some of these featurettes have been given high bitrates so they have fewer compression problems. The bulk of those extras are still in SD though (despite healthier bitrates).

Full Length Audio Commentary is provided by Roy Disney, who utilizes notes to provide commentary from many of the individuals involved in making Peter Pan.

Growing Up with Nine Old Men (41 min.) is documentary in which children are interviewed about their experiences growing up with Disney's "Nine Old Men" (the creative individuals Disney considered his most essential partners in filmmaking).

Deleted Songs and Scenes (15 min.) consist of two additional deleted songs and scenes which were never finished but are at last presented via rough concept art and storyboards.

The following featurettes are included: You Can Fly: The Making of Peter Pan, In Walt's Words: Why I Made Peter Pan (a nicely-done reading of an article written by Walt Disney about why he made the film), Tinker Bell: A Fairy's Tale (about the character and the animator responsible for bringing the character to animated life), The Peter Pan that Almost Was (which details possible storylines and artistic decisions that were considered for the film), and The Peter Pan Story, an older featurette that appears to have been created when the film was originally released.

This Blu-ray release also includes optional "Disney Intermission" (which is designed as a way to entertain young children while the movie is on pause by providing clips, activities, and more), a Peter Pan Sing-Along (which is based on standard subtitles), and a DisneyView Side Bars (the animated side-bars used to replace simple back side-bars). Again, I will reiterate that all of the supplements mentioned in this section are optional. I would personally not recommend them.

Sneak Peaks consists of trailers for Disney films soon to appear in theaters or on home media in new editions. 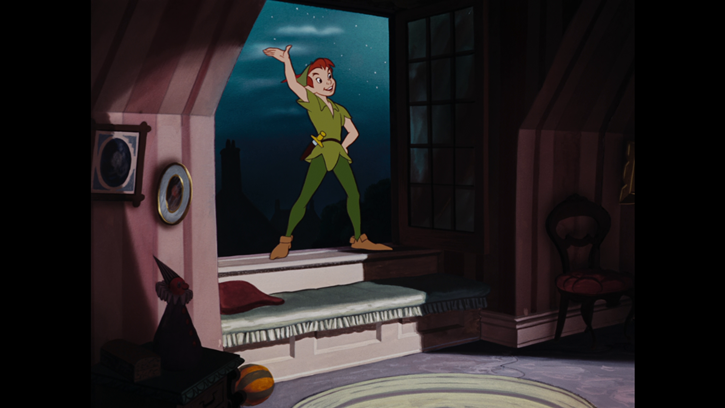 It helps the film hold luminous and incandescent ground as a meaningful part of film history that so many individuals in the company brought so much artistic worth forward in working on Peter Pan. The film has immense beauty and it's a classic children's story that can appeal to an adult as much as a child. You just have to have an imagination.

The Blu-ray presentation is the most impressive technical presentation of Peter Pan I have seen to date, but the altered colors (also present with Disney's former Special Edition DVD release) disappoint. This is a worthy Blu-ray release, but only because the film is a masterpiece and it appears as though Disney won't be bothered to present the film exactly as intended anytime soon.