Back in space with the Red Dwarf crew 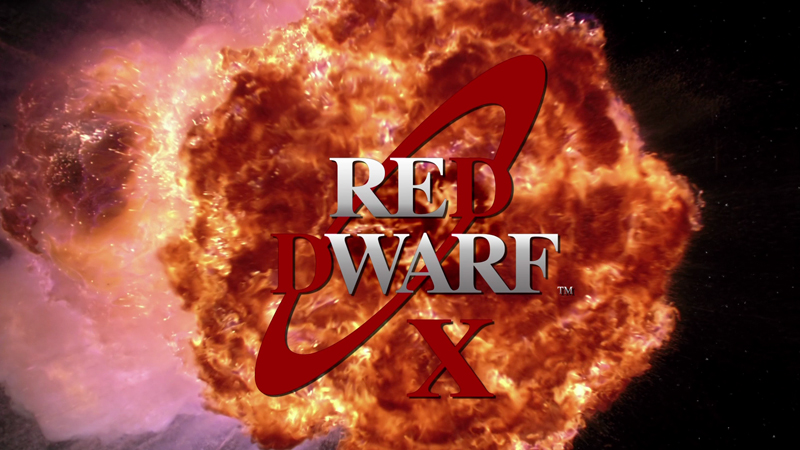 When your humble reviewer was a teen, he didn't live the most adventurous life. While his classmates were off experimenting with any number of illicit activities on a Friday night, he was most likely doing one of two things: watching original-series episodes of Star Trek on a PBS station out of Wilkes-Barre, Pennsylvania or watching Britcoms on the local PBS affiliate. Combining those two interests were the occasional broadcasts of Red Dwarf, a sci-fi Britcom about Dave Lister (Craig Charles), the last human in existence aboard the Red Dwarf, a mining vessel in deep space. Forever a fan of sitcoms, getting to see these unique, often risque series from across the pond was like my way of doing something risky. (Yeah, I know. I was certainly (and in many ways still am) a geek.)

Now, Red Dwarf started way back in 1989, and has left the air and returned in a couple of forms over the years, most recently in the Back to Earth mini-series, which aired on the British channel Dave in 2009 (having never watched the channel, I can't say for certain, but with its line-up of mostly syndicated re-runs, Dave seems a lot like an early Comedy Central, or perhaps USA Network.) A multi-camera sitcom, the series revolves around Lister, who, at the beginning of the series awoke from three-million years in stasis, a hologram named Rimmer (Chris Barrie), Kryten the robot (Robert Llewellyn) and the humanoid descendant of Lister's cat, creatively named Cat (Danny John-Jules.) After 10 years and eight series, the show left TVs until its return, and the mini-series was popular enough to earn a tenth season in time for the show's 25th anniversary. 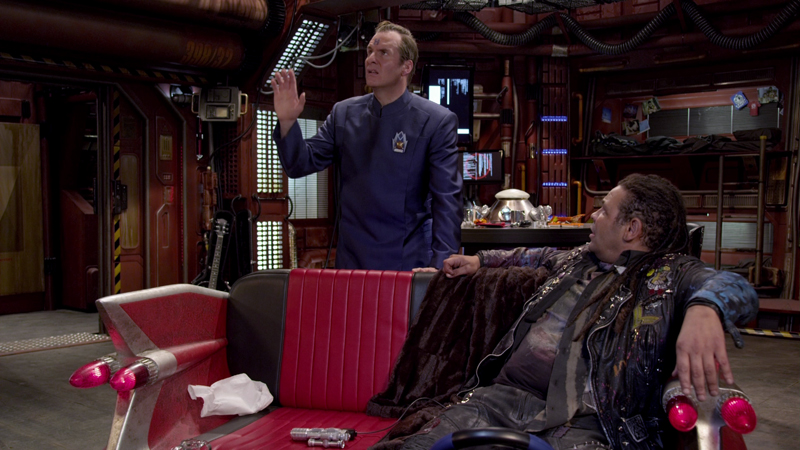 Unlike the three-part miniseries (or series eight for that matter, the six episodes in the show's tenth season don't have an overarching story, though it starts off with two thematically-similar episodes which see Lister and Rimmer deal with family problems, as Rimmer struggles with his resentment toward his more successful brother, and Lister celebrates Father's Day with himself (long story.) From there, the group has to track down the inventor of a crotch explosive threatening Lister's life, explore Lister's progeny, and battle Simulants, humanoid robots trained to kill. But of the six episodes, "Lemons" is certainly the most interesting, as the group finds themselves launched back in time and space, where they meet Jesus. Flirting with blasphemy and having fun with the standards of religion, it's easily the most memorable of this run,

Though the series is set in a futuristic, space-faring universe, it's a very traditional sitcom, relying on very standard comedy rhythms and basic wordplay (making it a fine candidate for CBS' prime-time line-up.) It even has the now-odious laugh track, which for some reason meant a lot to the creators. These days, the presence of a laugh track is such an indicator of simplistic comedy that it's used as a device to indicate just that on smarter series like Community. Meanwhile, most of the sci-fi elements that made the show so unique in previous seasons are missing here, as the series is more focused on the interplay between the characters, particularly the contentious relationship between the laid-back Lister and by-the-numbers Rimmer. However, the show's unusual mix of comedy and drama, which results in a few oddly unfunny stretches, remains in-place.

Though Red Dwarf was a favorite of mine as a teen, after watching this set, it feels like I've somewhat outgrown this brand of comedy, which spells out jokes with the subtlety of a kick to the groin and goes for the scatalogical whenever possible. That said, these episodes are a quick and easy watch, especially if you enjoy shows like Two and a Half Men. 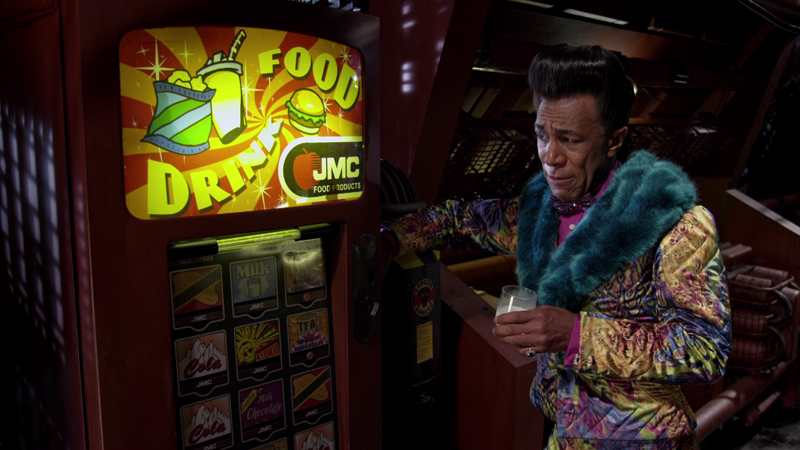 A two-disc blu-ray release, this set is packed in a standard-width, dual-hubbed Blu-Ray keepcase. The Blu-ray offers options to watch all the episodes, select shows, adjust the subtitles and, on Disc Two, check out the extras. There are no audio options, but subtitles are available in English SDH.

The 1080p, AVC-encoded transfers on these episodes are particularly solid, which is a feat considering the troubles the crew had with the video (see the extras for more on that.) Color is appropriate and pleasing, while skintones are spot-on and black levels are sufficiently dark for a series that's often dipped in murky space. The level of detail is also quite nice, showing off the fine job the designers did with what they had available resulting in the best-looking Red Dwarf yet. There are some issues with imperfections that were surprisingly inherent in the digital source material (again, check out the extras for more info), but there doesn't look to be any issues introduced with this release.

The DTS-HD Master Audio 5.1 tracks on these episodes is a bit weird, mainly because of the presence of the laugh track. The laughs of the dead (along with their occasional applause) take up the rear speakers, at a level that's far too loud, allowing it to compete too easily with the dialogue. The voices get to live up front in the center channel, while you get soem effects and music enhancement in the sides. If not for the overbearing laughter, the sounds is pretty solid, including solid bass and a lack of any noticeable distortion.

All of the bonus content is held on the second disc of this set, starting with 29:02 of deleted scenes, which includes cut dialogue, screen-screen footage and even a look at the unusual use of cue cards and scripts during shooting. The true value of these scenes are in the optional audio commentary from Naylor, who explains why clips were cut, talks about the effects of the show's budget and complains about the food on the set, though some of the clips are too short to allow Naylor to say much of anything.

"Smeg Ups" (12:48) is a relatively lengthy reel of flubs from the show, which are more entertaining than most such offerings, if only because they took place in front of a live audience, so you get to share in their reactions. Messing up as Kryten, Llewellyn is funnier here than anything he's done in-series.

The big extra though is a feature-length (2:02) behind-the-scenes documentary on the making of the series, We're Smegged: The Making Of. Covering the production in chronological order, the film looks at all aspects of the show's creation, via on-set footage and interviews with the entire cast and much of the crew. It's fantastic to hear about elements that don't normally get such a spotlight, like the set design and costuming, but the best part is hearing about all the struggles that went on behind the camera, from the problems due to the low budget to some seriously bad luck. It's truly rare to get such an inside look into the making of such a well-known show, and the story is wonderful to watch as it unfurls. 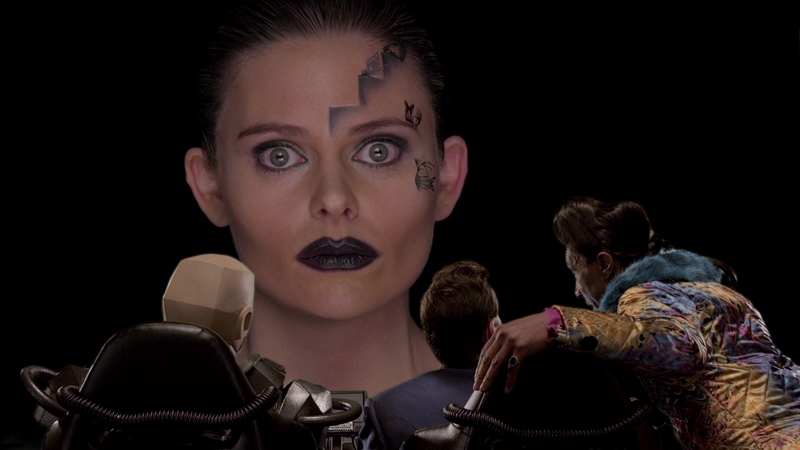 25 years in, Red Dwarf remains a decent multi-camera sitcom, but it exists in a world where the multi-camera sitcom is a relic (or at best a ratings bonanza for the only network programmed primarily for those unable to operate a remote control.) Though the mix of sci-fi drama in with the easy laughs is a bit off-kilter, at least the show tries to do something different, mostly by virtue of its genre. The set looks and sounds good, while the extras are very strong, thanks mostly to the inclusion of the documentary. Long-time fans should be quite satisfied, but newcomers may want to go back a while to see what the series used to be. The documentary is worth watching either way.