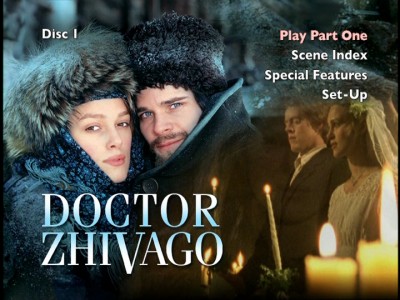 Sometimes in this movie-reviewing racket, you roll the dice and come up with a low number. You choose something like the 2002 British television version of Doctor Zhivago, nearly four hours of unrelenting mediocrity. There is something particularly punishing about the unexceptional. At least the bad stuff stirs your emotions, causes one to cry in anger or laugh in disbelief; for something like Doctor Zhivago, you end up watching the clock, wondering when it will be over, how you can ever make it to the end while still sitting upright.

The recent translation of Bruce Pasternak's romantic novel Doctor Zhivago has been sitting on my "to read" pile for some time now. I am a big fan of the David Lean movie that first brought the book to the screen in 1965, but knowing the size of the original tome, it stands to reason that even a film as epic as Lean's would have left some stuff by the wayside. This, along with a curiosity about how Keira Knightley would play the female lead, Lara, a part originated with exceptional quality by Julie Christie, led me to give this other version a shot.

Written by Andrew Davies (Bleak House) and directed by Giacomo Campiotti, this two-part Zhivago offers no surprises. It tells of various interlocking lives in Russia at the turn of the 20th Century. The orphan Yury Zhivago (Hans Matheson, The Tudors) is adopted by the Gromyko family. He grows up in comfort, eventually becoming a medical doctor and marrying his adopted sister, Tonya (Alexandra Maria Lara, The Baader Meinhof Complex). His true passion, however, is for Lara (Knightley), a girl he saw randomly on the street and has bumped into and helped at various times. Lara has had a rough upbringing. Her mother (Maryam d'Abo, The Living Daylights) let her be taken advantage of by an older man (Sam Neill, Jurassic Park), which has led to a troubled youth. She marries Pasha Antipov (Kris Marshall, Easy Virtue) as a means to escape, but sensing she doesn't really love him, and also possessed of a particularly adolescent hang-up regarding male and female relations, Pasha runs off and becomes a revolutionary.

Zhivago and Lara eventually connect on the Russian front in WWI, where he works as a medic and she has become a nurse. They form a bond under fire, but then separate when peace returns. Zhivago goes back to Moscow to discover that life has changed, the Communist Revolution has occurred. Unable to get with the program, Zhivago takes his family and heads to the countryside to try to get by. Naturally, more drama and more criss-crossing of the focal characters follows. 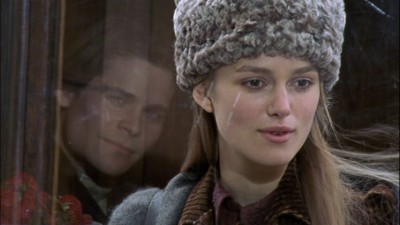 This Doctor Zhivago is given a large staging, shot on elaborate sets that recreate Russia of the era and also out in wild. Yet, somewhere in these wide open spaces and ostentation, passion and humanity is lost. The love stories have no real love, nor are they particularly sexy. The battle scenes during the war are meant to be brutal and bloody, but cinematographer Blasco Giurato (Cinema Paradiso) drains out all the danger by shooting the combat in slow motion. The writing is bland and lacking in poetry, and Davies constructs his narrative by the numbers, depriving Campiotti's cast of any meaningful opportunity to show their skills. The marks are all there, and the ensemble dutifully travels from one to the next, but there is never a sense that any of this matters, not even when history tells us otherwise. Worse, there is an inevitability to the interpersonal connections, the plot machinations never managing to rise above the level of coincidence, and thus defanging any sharp surprises that better filmmakers would mine for all their worth. Keira Knightley could have been a fine Lara, I suspect, but as depicted here, the character is pitiful rather than fierce.

Again, this television production of Doctor Zhivago is not bad. On the contrary. It's chronically competent. Which is what makes it so difficult to really enjoy. Like I said earlier, there are no surprises here, Davies and Campiotti stay true to the story, but that doesn't get them off the hook. Better artists can take the familiar and turn it into a high-wire act, making us swoon and panic and cheer, regardless of how many times we've heard the same tale. The difference is, those emotions would all be up there on the screen for us to participate in; here we're required to provide our own if we want any at all. 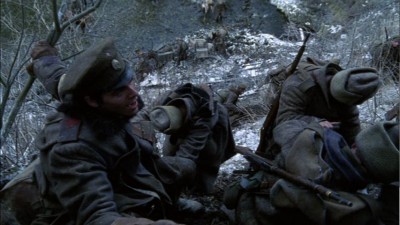 Video:
Acorn Media puts each two-hour episode of Doctor Zhivago on its own disc, in a standard DVD case with two trays and an outer slipcover.

The widescreen image is nearly as aggressively mediocre as the production. While it's hard to tell if the drab colors are a fault of the filmmakers or the manufacturer, the soft edges, jagged lines, and patchiness are definitely the signs of underwhelming digital production. Overall the image is clear and there is no apparent blocking, but muted picture quality does little to impress.

Sound:
The stereo soundtrack is decent, nicely centered with good emphasis on the dialogue and strong volume where required. No hiss, pops, or other glitches are evident.

Extras:
A paper insert in the case has descriptions of the major characters, I guess for people who maybe have trouble with the Russian names...? 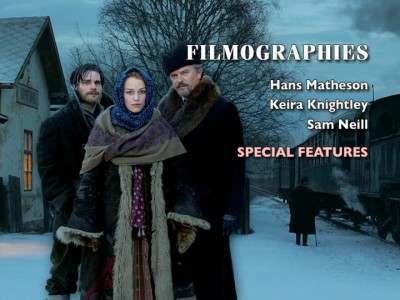 DVD 1 has individual interviews with the four main actors: Matheson, Knightley, Neill, and Marshall. These were shot during the show's production. There are text articles giving a biography of author Boris Pasternak, and the filmographies of Neill, Knightley, and Matheson. There is also a photo gallery.

DVD 2 has crew interviews, including writer Andrew Davies and director Giacomo Campiotti, along with producers Anne Pivcevic and Andy Harries.

This reissue appears to be a direct redo of the same set Acorn released in 2003.

FINAL THOUGHTS:
Rent It when the David Lean version isn't available and you just can't live without Russian snows and furry hats. 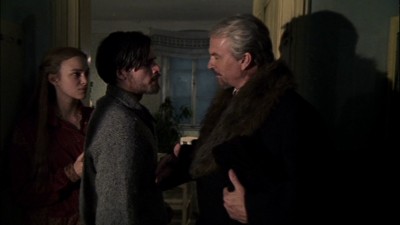