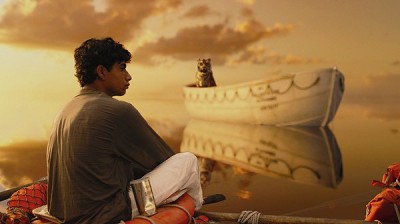 A friend and I were discussing current film adaptations of difficult books recently, and while all the attention was on whether or not the Wachowskies and Tykwer could wrangle the expansive narrative of Cloud Atlas, we were both convinced that the project that looked like it was on a collision course with disaster was Ang Lee's film version of Yann Martel's Life of Pi. Regardless of success, it was pretty much a foregone conclusion that Cloud Atlas would be interesting; from early peeks into Pi, it looked like it was going to be a metaphysical mélange of clichés and feel-good philosophy.

In all of our opinions, we were kind of right, and we were also a little wrong. Cloud Atlas mostly pulls it off, and does so in an interesting way; Life of Pi is better than expected, capturing the mythic fable of Martel's original novel, but from a distance, as if viewed from outside the narrative rather than inside of it. With 3D glasses on, no less. Additionally, it fails to fix Martel's mistakes.

Life of Pi is the story of Pi Patel, an Indian immigrant living in Canada. At the start of the film, in its present day, Pi is a professor of religion played by famous Indian actor Irrfan Khan. The man is talking to an inquisitive author (a pasty hipster played with dreary would-be earnestness by Rafe Spall) who has been sent to him because he's heard Pi has a fantastic story that will make the writer believe in God. Dutifully, Pi relates the tale of his young life, of growing up with zookeeper parents in India, where he lived the life of the mind and the soul, seeking succor in modern philosophy and ancient religion alike.

There is a lot of build-up here, and a lot of intrusive cuts back to the current situation, with Pi and the novelist sharing a park bench and misty eyes as the story drudges toward its true beginning. The adventure finally gets underway when Pi's father (Adil Hussain) decides to sell the zoo and emigrate. He packs the family and the most valuable animals onto a sea cruiser, and they head to North America in search of a new begining. Jump past one Gerard Depardieu cameo and a raging storm later, and the cruiser is sunk and Pi is stranded by himself on a lifeboat. Well, not by himself, exactly. There is also a zebra, an orangutan, a hyena, and a tiger. Then, nature being what it is, before long it's just Pi and the tiger.

By and large, the rest of Life of Pi is the boy and the cat striking a balance and figuring out how to survive on the ocean. They encounter many sights along the way, some wondrous (whales jumping through phosphorescent plankton, flying fish, an island of meerkats) and some not nearly as much (flat seas that look like glass, yet another storm). Whether dangerous, languorous, or legitimately beautiful, Ang Lee (The Ice Storm, Brokeback Mountain) and cinematographer Claudio Miranda (The Curious Case of Benjamin Button, Tron: Legacy) lacquer the scene with the same sense of wonder. The Life of Pi was shot in 3D, and the added dimension is put to use with an elegant sense of detail. The effect is more akin to what Scorsese did with Hugo than the hasty addition of special effects in films like Clash of the Titans and John Carter. Lee considers his frame, mapping out each element's position within it, giving a storm cloud an ominous depth or having a weapon extend beyond the edge of the screen. Some of the most awe-inspiring scenes are when the ocean is completely still, and Pi and his tiger appear stuck on an unyielding reflective surface. Down is up, and up is down.

The script by David Magee (Finding Neverland, Miss Pettigrew Lives for a Day) lacks the rigorous consistency of the visual set-up. Some sequences drag too long, and somewhere along the way, Martel's original mythology lost its heart, dropped in the ocean like the necklace at the end of Titanic. I was curious to see where Pi and the Tiger were going, but not all that concerned whether or not they'd make it. Pi's need to turn every event into an object lesson from the gods gets a little wearisome, which is made all the more worse by the attempts to wrap it all up and fit the pieces together in the final scenes. It's the same ending as in the novel, and it bugged me as much as it did when I read the book. The stinger Martel puts on the end of his shipwreck fairy tale arrives less like an epiphany and more like a dodge, like the author knew no other way to get out of this thing he had concocted, and so he simply steps to the left. (It actually seems fitting that M. Night Shyamalan was once attached to write and direct.)

Without giving too much away, the conclusion of Life of Pi bothers me partially because it lands on a particular pet peeve of mine. Yet, there is more to it than that. It struck me as I was on my way home from the theater that the biggest problem with Life of Pi is not that the payoff is false, but that it lacks legitimate sentiment. While I enjoyed much of the film, I wasn't really all that invested in it, and that Martel, Lee, et al., fail to bring it home exposes how little weight the tale has. The lack of any satisfactory resolution, of any emotional reward, means the movie deflates more than it really ends. You went through this grand and marvelous journey and all you got out of it was a lousy philosophical conundrum? Print it on a T-shirt, and save me the two hours.

Except, no, tripping at the finish line doesn't entirely invalidate the race to get there. I still think there is plenty to recommend Life of Pi. Stellar special effects, good acting, and a few grand sequences of pure, wondrous storytelling still make it all worth it. Just don't expect it to solve life's problem's for you, because despite dressing up as a spiritual parable, Life of Pi never really manages to solve its own. 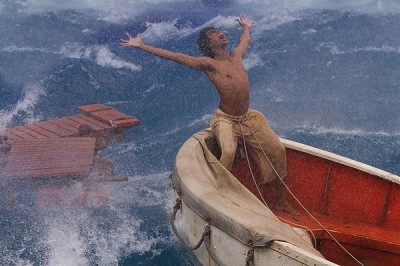