We Can't Go Home Again & Don't Expect Too Much


"I made ten goddamn westerns, and I can't even tie a noose." - Nicholas Ray 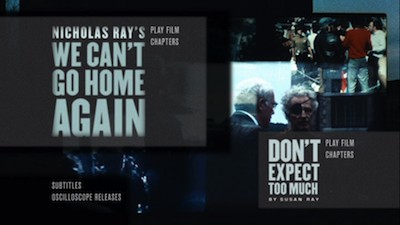 Shot around the time of Nixon's re-election, premiered at Cannes in rough form in 1973, and then promptly forgotten, what is ostensibly Nicholas Ray's final full-length motion picture is a strange specimen. Released nearly a decade after the legendary filmmaker's final studio picture, We Can't Go Home Again is a bizarre amalgam of social and artistic commentary, both real and staged, at once artifice and truth. It's hard to say if it's actually any good, or even remotely successful, but it is fascinating. As a work from the man Jean-Luc Godard declared to be cinema itself, it's a formalistic teardown of all that moviemaking was and could be. Cinema is looking in the mirror and is unhappy with what he sees.

Indeed, this is a film that has more in common with Godard's experiments in essay films with Jean-Pierre Goran (note the appearance of the infamous Hanoi Jane newsreel) and self-reflexive explorations like Symbiopsychotaxiplasm than it does with Ray's most revered motion pictures, like Rebel Without a Cause and Johnny Guitar. The auteur's state of mind is laid out in the opening narration. The 1960s are over, the bad guys won, and the good guys are in retreat. It is in this climate that Ray stops making movies and takes a position as a teacher in upstate New York, effectively divorcing himself from the "action." His move is representative of the cultural shift, from the group dynamic to more individual (read: selfish) concerns. Throughout We Can't Go Home Again, Ray tries to guide his students--also, his cast--toward something greater, some kind of community, even sending them to the 1972 Republican National Convention in Miami. All his efforts fail, however, when Nixon wins the Presidency, and the old man must resort to more drastic measures to rally the young troops in his care.

We Can't Go Home Again is a film that is very difficult to describe in any way that really captures what is going on. The movie is set up as a documentary, but it is not. It's also a narrative feature, but then it isn't quite that, either. It toys with conventions of crime movies and also horror movies, but then exposes its own pretense. Ray sets up a fairly rigid style, essentially establishing two primary frames and then setting up other planes of activity within them. There is a static backdrop throughout We Can't Go Home Again, one that changes a handful of times, but the image remains still regardless of what it becomes. The main portion of the film is placed on top of that. Since most of the static images are outdoor scenes, the effect is almost like seeing the screen of a drive-in movie theater, with the world continuing on behind the fiction you are engaging in.

Within this center frame, the actual action unfolds. Sometimes the "events" of the movie take place in a marginalized screen within a screen, sometimes there are up to three screens within the one. Only once does Ray break from all this and provide one full-frame montage, letting a moment of "reality" take over. It's a conversation between Ray and one of his students, both of whom, for all intents and purposes, play themselves. We Can't Go Home Again is a movie that is about Nicholas Ray making a movie while he teaches about making movies. The metafiction doubles back on itself, like a ribbon of frosting being drizzled onto a cake.

Thus, it seems futile to try to organize any thoughts on the movie, though my guess is Ray wants the chaos of We Can't Go Home Again to eventually coalesce as some kind of artistic order in the viewer's mind. I don't think I am quite there yet, so instead of writing a conventional summation, I'm just going to share the bullet points of the notes I jotted down while watching We Can't Go Home Again, and maybe they'll coalesce for you.

* Self-reflexive
* Sex, film, politics, leadership
* What we can and cannot know. ("You don't know me!") What we can and cannot see, and the legitimacy of seeing. (Nicholas Ray's eye patch.)
* Move away from the urban environment, isolate self from common experience, rebuild or implode
* Documentary footage vs. the staging of reality. Is that what cinema is? A journalist becomes the soundman, even though he is dubbed over with another's voice and sound is the least trustworthy aspect of the whole film. He talks about recording dialogue in sexual terms. "This is my first time."
* The simultaneous allure and rejection of power. Ray is considered suspect as a teacher, the rich white man as the pupils see it, and the students challenge him; at the same time, they know all his films and want to hear stories about Marilyn Monroe and Jane...? ("Which Jane?" he asks.)
* Violence and illusion; horror movie murders; Picasso's Guernica
* The "actors" and "crew" debate the veracity of the scene immediately after shooting it.
* Text and subtext exist simultaneously, often swapping places as screens move and change size.
* Suicide; togetherness; the new generation 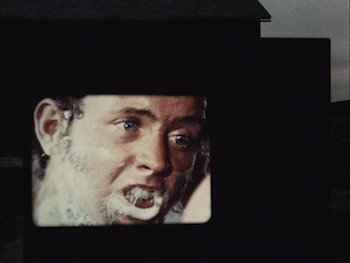 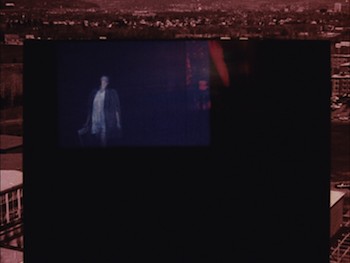 If We Can't Go Home Again never quite comes together, that could be because it was never truly finished. This version is billed as a "restoration/reconstruction," and the documentary Don't Expect Too Much has been titled that for a reason. Put together by Susan Ray, Nick's wife, this feature takes the piles of footage shot for We Can't Go Home Again and uses the leftovers to tell the tale of the movie's making, detailing Ray's move from Tinsel Town to a college campus, and the big experiment of enlisting his students to make a movie. There was no plan, they would make it up--and learn--as they went.

Susan Ray compiles this unseen material with new interviews conducted with many of the students, including Stranger Than Paradise director Jim Jarmusch, to recreate how the passion of unbridled creation gave way to fatigue and bruised egos. Eventually, the film floundered due to its lack of focus and Ray's addictions; at the same time, understanding what he was going for and how he wanted to "break the rectangle" and not be beholden to standard film conventions sheds some light on the impulses behind We Can't Go Home Again. It also makes sense that the title was chosen by the students, who had no idea to what degree their ability to turn back was fading. The film crew became a family, and then like most families, quarreled and disintegrated.

Following the Cannes premiere, Ray spent a lot of time chasing money, and then entered into a phase of continuous editing. These days, what he envisioned would be easy. Digital editing tools would allow the frames within frames within frames he desired. All he could do in the 1970s was project the different images simultaneously and try to bring them together. The thread never emerged, he never could pull the ship in the bottle to its full height. In many ways, he was ahead of his time, but in many others, Ray was just out of time. 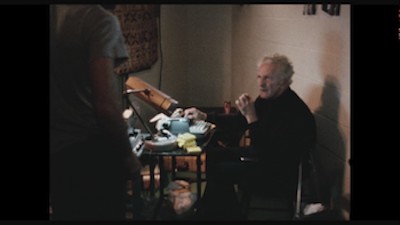 Video:
We Can't Go Home Again is shown at a full 1.33:1 aspect ratio. The picture quality is excellent. Though one would expect the source material to have problems, given its age and the fact that it's been allowed to sit neglected for nearly thirty years, the actual DVD image looks wonderful. Colors are nice and seem to be true to how the film was shot, and there are no real problems with resolution, digitization, or other dirt and debris.

Don't Expect Too Much is widescreen, 1.78:1. The new footage has the expected crispness of modern video, while the older footage (which naturally is boxed off in the wider frame), is nicely preserved and restored, making a fairly seamless presentation.

Sound:
Both films are in English and are mixed in stereo, with optional English subtitles provided. Both audio programs are fine. They are fairly unremarkable in terms of sound design, and so it makes sense that they'd be given a straightforward sound presentation. 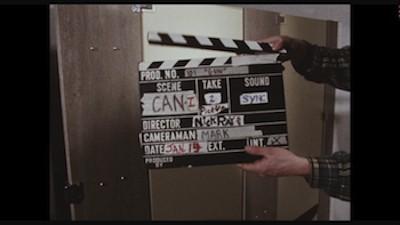 Extras:
We Can't Go Home Again & Don't Expect Too Much is a two-disc set, packaged in Oscilloscope's trademarked box, with an interior folding holder and an outer slipcover. The two movies are on the first DVD by themselves, while the second disc is given over to bonus features. There is also a booklet included, featuring photos, a handwritten note by Nicholas Ray from 1977, and three essays, including one by Susan Ray addressing the audience, and pieces by Serge Daney from 1980, regarding We Can't Go Home Again, and Bill Krohn, discussing Ray's short film Marco. The latter is included as a bonus, though shown only in its original rushes, not in the final cut. To go along with it are interviews with participants Claudio Massatenta and Gerry Bamman. Marco is about 28 minutes long, and it was made by Ray with his students at the Lee Strasburg institute. It's not really explained why we don't get the finished product, but it is interesting to note that this format allows us to actually hear Ray directing. 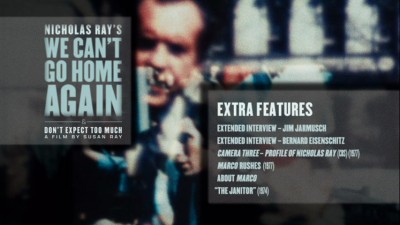 On the subject of Ray himself, there is a half-an-hour interview with the man shot for CBS in 1977, around the time of Marco. We also get extended cuts of the interviews with Jim Jarmusch and biographer Bernard Eisenschitz that were filmed for Don't Expect Too Much.

Finally, another short piece by Ray is included, the 1974 episode he directed for the anthology film Wet Dreams. The director himself stars in this as the titular "The Janitor." Totaling 12-minutes, it's a profane and obtuse short about a man who cleans up in a movie theater and his personal proclivities, which include religion and politics in addition to sex. I'm not going to mince words: it's pretty much terrible.

FINAL THOUGHTS:
Recommended. While maybe not the intense rediscovery that it might be billed as, Nicholas Ray's We Can't Go Home Again, when coupled with Don't Expect Too Much, the explanatory documentary by the late director's wife, makes for an intriguing glimpse at a veteran filmmaker moving into a new era and trying to reinvent the art form some would say he helped perfect. Nicholas Ray was a long way away from Rebel Without a Cause and Bigger Than Life by the time he started teaching experimental film in upstate New York and enlisted his students to collaborate on a film, but it would seem he was also doing exactly what he desired. Though We Can't Go Home Again was never quite finished, this reconstructed version allows us to grasp at the possibilities Ray saw, and a well-rounded package from Oscilloscope means the story behind the story gets told, as well. 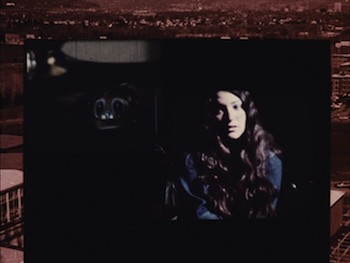 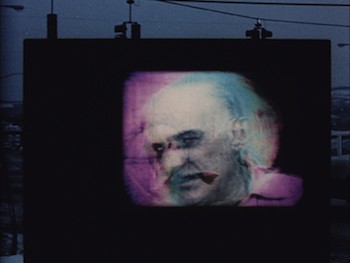