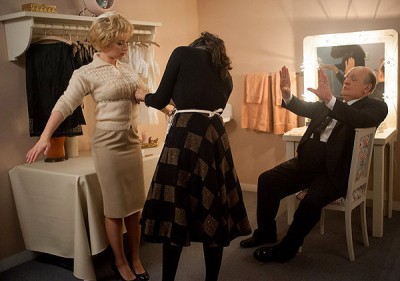 In 1960, Alfred Hitchcock released Psycho and changed the way a lot of people thought about movies. More than fifty years later, and they've now made a movie about the making of Psycho, and while Sacha Gervasi's Hitchcock isn't going to change cinema as we know it, that doesn't stop it from being a damn entertaining motion picture all the same.

Anthony Hopkins and a whole lot of make-up and padding star as the rotund Master of Suspense. As Hitchcock opens, the director is exiting the highly successful premiere of North by Northwest. Despite the latest in a long line of triumphs, the 60-year-old filmmaker is at a loss for what to do next. The studio's demands of more of the same are shelved next to the critics suggesting that maybe Hitch is too old to be in the game anymore. The man himself is more concerned about heeding the latter. It's time to do something different, something to prove he's still vital.

Enter Psycho, Robert Bloch's profile of notorious serial killer Ed Gein (played here in fantasy sequences by Michael Wincott). Everyone in Hollywood has turned down the book, it's far too macabre to make it past the censorship board. Hitchcock becomes fixated on the project, so much so that even after Paramount passes, he and his longsuffering wife, Alma Reville (Helen Mirren), mortgage their house and make Psycho themselves. 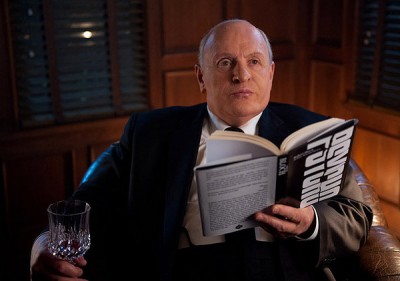 Regardless of whether you're a fan of movies about movies the way I am, Hitchcock is a successful popcorn picture--sometimes emphasizing the corn, but that's okay. Based on a book by Stephen Rebello, the screenplay by John J. McLaughlin doesn't just stay confined to the closed set on the studio lot where Hitchcock ordered Anthony Perkins (James D'Arcy, Cloud Atlas) to stab a naked Janet Leigh (an aptly cast Scarlett Johansson). It's as much concerned with Hitch's homelife and, in particular, his marriage and working relationship with Reville, a talented writer and the engine that Hitch regularly credited with driving his creative vehicles. Age has made Hitch as complacent with his wife as critics seem to think he is with moviemaking. For her part, Alma is fed up with her husband's obsession with blonde actresses. She enjoys a flirtation with Whitfield Cook (Danny Huston), the writer credited with the screenplays for Hitchcock's Stage Fright and Strangers on a Train--though as with Psycho, the quality of his scripts were due to Reville's editing and rewriting. (Blink and you'll miss Karate Kid's Ralph Macchio as Psycho scribe Joseph Stefano.)

When it comes down to it, Hitchcock is as much about the hard work and blind determination required to make a marriage work as it is about the hard work and determination that goes in to helming a major motion picture. Even better, it's about the unique situation of the husband and wife both being in the cinema business. Director Sacha Gervasi, known for the documentary Anvil: The Story of Anvil (and also writer of The Terminal, which I've always thought an undervalued Spielberg effort), has an affinity for misguided dreamers, and his version of Hitchcock lovingly delves into the man's quirks and peccadilloes. We regularly see the legendary filmmaker peeking through window blinds at an anonymous fair-haired actress, or listening for personal revelations that he can exploit in the people he works with. In a way, Hitchcock is almost a macabre parody on the standard biopic. The use of dream sequences and waking fantasies where Hitch talks to Ed Gein, as well as the expected flashes of inspiration and the all-too-knowing self-fulfilling prophecies, are executed with Gervasi's tongue securely planted in his cheek. He knows these biographical clichés are cheesy, so why not have fun with them? Thus, Hitchcock is closer to Tim Burton's exceptional Ed Wood than it is, say, Chaplin or The Aviator (both of which are also really good, I should note). 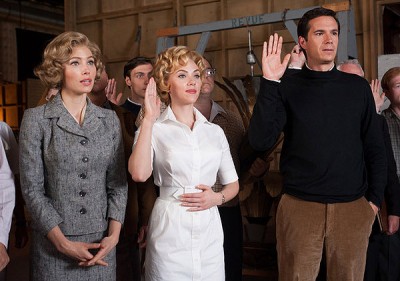 The cast seems game for it. The supporting players fit well in the period roles, and the ladies--Scarlett Johansson and Jessica Biel (playing Vera Miles), in particular--look fantastic in the vintage clothes. Mirren and Hopkins are an exceptional onscreen couple. They clearly respect each other as performers as much as the people they are playing respected one another. Anthony Hopkins deserves extra praise for managing to make his Hitchcock impression become more than an impression, even while laboring in a fat suit. I'll admit, it took a couple of scenes to get used to seeing him in that get-up and hearing him put on the voice, but by midway through, I had all but forgotten that it was him, the illusion took over. (This is not the case with the other Hitch movie, HBO's The Birds-era bio, The Girl. Toby Jones does a better impersonation of Hitchcock, but it never stops being a parlor trick. Plus, The Girl is all kinds of rotten--stuffy, boring, and questionable in its intent. In other words, everything Hitchcock manages to avoid. You should avoid it, too.)

Hitchcock is a quality production top to bottom. It's shot with impressive gloss by Jeff Cronenweth (The Social Network), and scored to perfection by Danny Elfman (turning in his second most-restrained score this year; I was more surprised to see his name on Silver Linings Playbook). Sure, this is a movie that normally would stink of overripe Oscar chum, but it's far from the self-serious efforts one normally expects from similar productions. Hitchcock is neither stuffy nor vain. Gervasi doesn't preen for Academy voters. Instead, he stands by his subject's own motto that films should be slices of cake. This one is rich and tasty, full of sugar, but so yummy to eat. 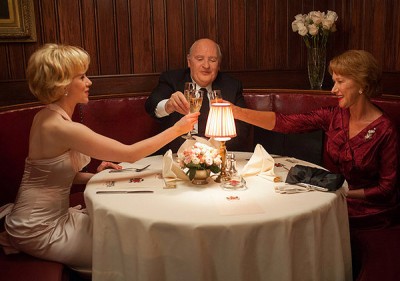