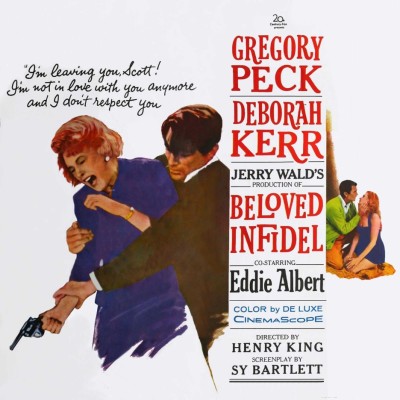 Despite being a pretty big F. Scott Fitzgerald fan, it was only recently that I discovered that there had been a film version of Beloved Infidel, Sheilah Graham's memoir about her romance with the great American author, a dalliance that occurred at the tail-end of Fitzgerald's life when he was living in Hollywood trying to make money writing screenplays and working on The Last Tycoon. Now that I have seen the film via this limited edition Blu-Ray from Twilight Time, I understand why Henry King's biopic is rarely spoken of: Beloved Infidel is a real stinker.

Produced in 1959, Beloved Infidel stars Gregory Peck as the floundering scribe and Deborah Kerr as the self-invented gossip columnist who falls under his thrall. The movie ends up being more hers than his, and in a lot of ways, seeks to glorify the self-mythologizing that Graham employed through most of her life--a trait that is not out of line with Fitzgerald's best work. Too bad Sheilah Graham's no Jay Gatsby. Sy Bartlett's script opens as the British journalist is moving to America in hopes of getting a job writing her scandalous relationship columns for a U.S. paper. Not long after arriving, Graham is sent to Hollywood to start writing a gossip column about movie stars. Her character attacks enrage most of Tinsel Town, but her prose sells papers.

On the flipside, Fitzgerald is down on his luck. It's the late 1930s, several years since the publication of Tender is the Night (which this reviewer considers his finest work). His wife Zelda is in a sanitarium after one of many breakdowns, and his daughter Scotty is away in private school. The author is chasing movie money in order to take care of them, a vocation he never quite mastered. His actual IMDB page mostly consists of uncredited script doctoring (legend has it that he wrote the staircase scene in Gone With the Wind). Fitzgerald meets Graham at a party thrown by a mutual friend (Eddie Albert), and he is immediately drawn to her. As the audience, we are never sure why, there seems very little reason for anyone to be drawn to this vapid woman. Not that he is any better. As portrayed here, F. Scott Fitzgerald is a dreadful bore and a self-pitying sad sack. If this were real life and these two were in my social circle, I'd be glad they were dating each other and saving anyone else the punishment.

Beloved Infidel chronicles their ongoing relationship, as well as Fitzgerald's many professional failures and his intermittent struggles with alcoholism. Gregory Peck plays an extremely unconvincing drunk here, showing the author as a cartoonish buffoon when he's in his cups. Peck's broad gestures are a hair's breadth short of being slapstick, and his sudden violent outbursts aren't much better. The only onscreen object Peck has less chemistry with than a booze bottle is the woman he is supposed to be in love with. The romance here is as flat as a day-old gin fizz.

There is very little reason for anyone to sit through Beloved Infidel. If you aren't a fan of F. Scott Fitzgerald, actually, there is probably zero appeal when the film is presented at face value. Henry King is a competent director, but barely so. Though well-known for Love is a Many-Splendored Thing, his filmography is mostly littered with clunker adaptations of the best of American literature. He shows little affinity for the nuance of Fitzgerald's work, much less the man himself. Beloved Infidel timidly approaches the darker aspects of the story, turning the truth into milquetoast melodrama. Oh, if only I could get in a time machine and go back to a few months ago when I had never heard that this atrocity ever existed! Such an innocent time that was...

Video:
Twilight Time's 1080p HD transfer of Beloved Infidel is shown at a widescreen 2.35:1 aspect ratio. The look of the image transfer itself is middling, with lots of noticeable grain that ends up looking hazy rather than coming across as cinematic. Colors are given the appropriate timing, capturing the 1950s Technicolor properly, but the overall resolution is soft. There is a persistent appearance of auras around the actors, and a few scenes near the end where the image is distorted and there is a noticeable yellow line on the right side of the frame. Otherwise, the picture is mostly free of dirt or scratches. Beloved Infidel is not a terrible Blu-Ray, it's just an okay one.

Note that this release is a limited edition; only 3,000 copies are being made. It is being sold exclusively through screenarchives.com.

Sound:
The soundtrack is mixed in multi-channel 4.0. It has good volume and an excellent balance between the dialogue and the melodramatic orchestration.

Extras:
We get the film's original theatrical trailer and an audio track isolating Franz Waxman's score. There is also a nice booklet in the case with excellent liner notes.

FINAL THOUGHTS:
Turn the Blu-Ray player off and read a book instead. Maybe The Last Tycoon. F. Scott Fitzgerald used some of his love affair with Sheilah Graham as inspiration for the book, and it's a far better glimpse of pre-War Hollywood than this film could ever claim to be. Fitzgerald died writing it, and that struggle deserves far better than Beloved Infidel. Reading the book is the least you could do. Actually, the least you could do is watch Elia Kazan's adaptation of the unfinished novel, which is also a much better movie than this one. There. You have two options for something to do besides wasting your time watching Beloved Infidel. Skip It. I certainly wish I had.