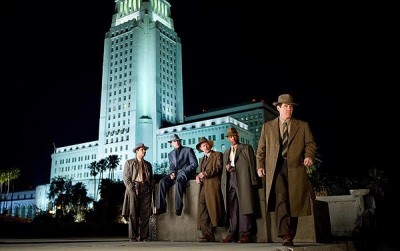 Legend has it that once upon a time in Hollywood, a movie producer watched an old awards screener of L.A. Confidential and thought to himself, "This is good, it should have been a bigger hit. It's just too arty. I can do better." He then watched a bargain-bin, previously viewed copy of The Black Dahlia and said, "This is closer, but it's too hard to understand and just not trashy enough to capture Los Angeles as I imagine it. I can take this down several notches."

And so was born a fever dream of machine-gun fire and half-remembered lines from older, better movies. Faux jazz-age glitz cut together with handsome actors playacting in their childhood fantasies and Sean Penn's audition tape for the Pacino role in the Dick Tracy film. It's a two-hour commercial for flash bulbs, fake blood, and fedoras. It's called Gangster Squad, and it's truly awful, kicking off 2013 good and proper. The only way this movie is going to be remembered next year is as a footnote on most critics' worst-of lists. Take all the plot holes from Gangster Squad, add them up, and dig a grave the same size, and you just might have a chasm large enough to bury all the careers that are going to be killed by this stinker.

Gangster Squad begins with the words "Inspired by True Events," which more and more is code for "Everything You See After This Sentence is Entirely Fake." To be fair, Sean Penn's character, Mickey Cohen, was really a boxer who became a mob boss and for a time was top dog of La La Land post-WWII. There was also a real chief of police named William H. Parker (Nick Nolte) who may or may not have gone to a square-jawed, broad-shouldered sergeant named John O'Mara (Josh Brolin) and asked him to form an off-the-book regimen of good cops to cripple Cohen's operation. O'Mara will gather up five men: the cowboy (Robert Patrick), the black guy (Anthony Mackie), the Mexican (Michael Pena), the smart one (Giovanni Ribisi), and the lady-killer (Ryan Gosling). They'll roam the night stopping heroin shipments and knocking over gambling dens, breaking kneecaps and shooting up windows, and joshing each other like a genial multicultural brigade of warriors. (Interesting that there is only one apparent racist in the entire movie; man, Southern California was such a progressive place in 1949! Daryl Gates, we hardly knew ye.) Eventually, it will all get too hot, Mickey will get really angry, and he'll kill somebody close to the cops, and then threaten O'Mara's family, and then go after the moll (Emma Stone), who just so happens to be two-timing Cohen with the lady-killer cop. Coincidence #172 of a script full of them. 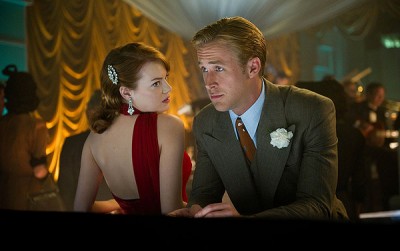 But then, there is nothing subtle about Gangster Squad. It's a flick where individual scenes aren't judged by how they serve the story, but by how cool the director thinks they will look onscreen. For instance, we are introduced to Anthony Mackie's character when he pulls off the impossible stunt of throwing a switchblade through a crowded nightclub to spear the hand of a dope dealer mid-deal. No reason, no logic beyond you being absolutely sure he's a badass. Same goes for Gosling's character, whose idea of a subtle pick-up is telling a lady outright that she'll end up in his bed by night's end. I mean, sure, it probably works for Ryan Gosling in real life, but he doesn't have to be so smug about it. For all the good performances that Gosling gives, when he's bad, he's really terrible, (I'm sorry, but Blue Valentine and that terrible accent and horrible sunglasses?) It's clear he's just cashing a paycheck here. He's not even trying, and it's embarrassing. Unless...wait...were you trying to do an imitation of Josh Hartnett? Because that's even worse. 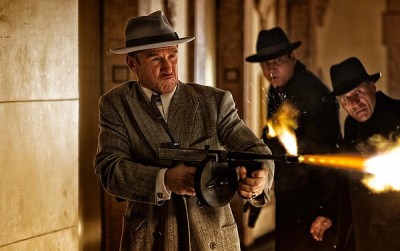 It's similarly hard to figure out what Sean Penn is thinking. Is he having fun or does he think this is his chance to have a memorable mobster role, the way the aforementioned Dick Tracy performance was a boon for Pacino or like De Niro's memorable turn as Al Capone in The Untouchables? Gangster Squad has bathed in eu de De Palma, let's be honest. Robert Patrick's character is just the hayseed stand-in for Sean Connery. Admittedly, the former T-1000 is a hoot as the old-timey gunslinger, but his moments to shine are few and far between. Giovanni Ribisi also finds some measure of nuance with his gadget man, using his usual quirks and tics to full advantage without going nuts with them. Most of the other supporting players, including Emma Stone, are wasted in underwritten parts. Only Josh Brolin comes through this with his earnestness intact. His is a performance befitting a leading man. He's mostly fists and grand pronouncements, but he also has a little soul and the script, written by Will Beall (credits include five episodes of Castle and next year's Justice League movie), at least pauses long enough to give O'Mara a home life, clichéd as that might be (guess what? His wife is pregnant!). None of the other characters have much backstory. They are just props.

Gangster Squad was directed by Ruben Fleischer, who is best known for Zombieland. That would explain the weird aesthetic stutters that show up from time to time--the random close-up of a Zippo, a slow-motion hale of bullets, a flash of a frozen moment during fisticuffs. These pop up so rarely, one can only assume that Gangster Squad was either helmed by a director of no clear vision or subject to too much outside interference. Gangster Squad was postponed for nearly five months after the shootings in a Colorado movie theater over the summer, mostly to give the filmmakers time to remove a similar scene from the film. This doesn't seem to be a sufficient explanation for how wrong the rest of the movie is. It looks like once upon a time they maybe had pretensions of making an MTV-generation mob movie, but they abandoned the idea midway through production. These anachronistic choices stand out as being sloppy mainly because the rest of the movie is so immaculately designed. Major kudos are due to costume designer Mary Zophres (a regular of Coen Bros. productions), set decorator Gene Serdena (Adaptation, The Fighter), production designer Maher Ahmad (Holes), and the rest of the art department. For folks who have a fetish for vintage clothes and the glamour of old Hollywood, Gangster Squad is full of stuff you'll want to pore over and stare at. Emma Stone can wear an evening gown like an old-school diva, and the architecture at Cohen's nightclub and the old L.A. landmarks is impressive. If only looking pretty were enough to justify the price of a ticket.

And make no mistake, I'm one of those folks. I am Gangster Squad's intended audience. I love this stuff. I eat up old gangster movies like ice cream. (I even gave Black Dahlia a good review, no less.) Yet, even going into Gangster Squad with low expectations, the movie managed to do a limbo right underneath them. The tone-deaf patter, the ragged stupidity of the narrative, the casual brutality of the violence--Gangster Squad is a hurricane of ineptitude. It's so bad as to be more dull than laughable. Though do your best to go for the latter, because giggling through this slushpile is a far better option than taking it seriously. 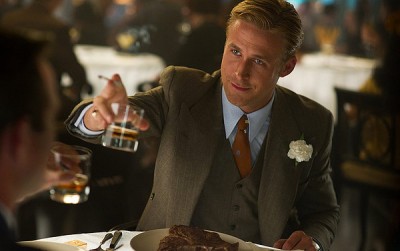