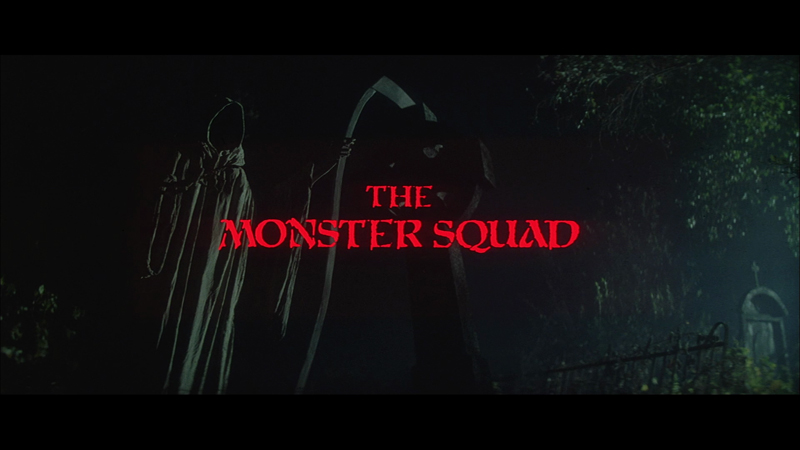 
The Story So Far...
The Monster Squad is an underrated late-'80s action/horror-comedy pitting a team of kid horror-movie buffs against the classic Universal monsters, with the fate of the world at stake. Written by Shane Black (Iron Man 3) and genre veteran Fred Dekker (who also directed), the film finally made it to digital home video when Lionsgate released it on DVD in July of 2007 and on Blu-Ray in November 2009, but it went out of print when the studio lost their Republic Pictures rights. DVDTalk has a review of Lionsgate's DVD release.

Back when I reviewed the '80s teen classic License to Drive, I shared the story of my last day at college, when myself and the inimitable Matthew J. McCue, decided to recapture our youth and rent the Corey-filled License and the eminently-quotable, but criminally under-appreciated The Monster Squad (on VHS!). As the last thing I experienced before entering "the real world," these films hold a special place in my heart.

But sentimentality will only go so far when it comes to enjoying an old film or TV show (a fact cruelly learned in reviewing the He-Man cartoons.) Fortunately for The Monster Squad, there's much more than nostalgia going for it, as the story of a band of horror film fans battling the classic movie monsters is an fun (and often funny) piece of filmmaking that's also solid '80s nostalgia and an exciting action flick.

Blending a couple of genres, including adventure, comedy and horror, the film is a great example of one of my favorite story concepts: the team-up. Bring together a disparate group of people with a common goal or enemy and see if they can overcome their differences to use their unique talents to overcome the odds. Whether it's Revenge of the Nerds, The Goonies or Ocean's 11, the results tend to be, at the least, interesting, and usually pretty damn good (perhaps because you have to be a good writer to juggle multiple characters.) 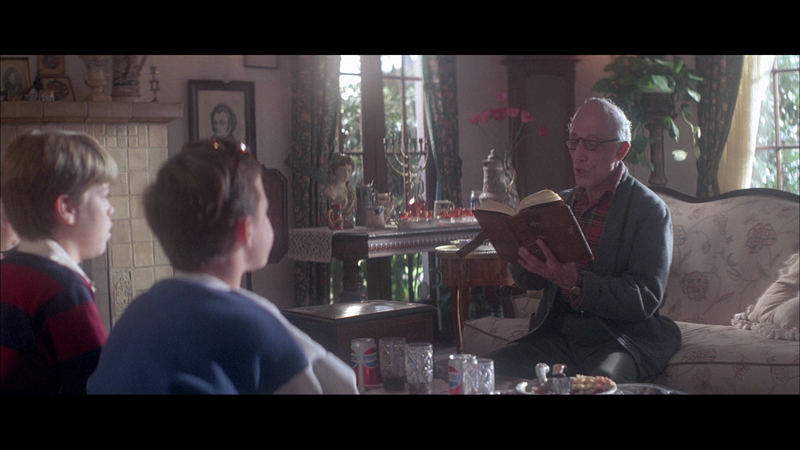 Such is the case here, as young Sean (Andre Gower) and his friends, a bunch of grade-school fright fans, discover that Dracula, aided by Wolfman, the Mummy, Frankenstein's Monster and Gillman (similar to the Creature from the Black Lagoon,) has arrived in town, looking to take over the world by obtaining an amulet that would give him ultimate power. Since the kids, including the unfortunately-nicknamed Fat Kid and Fonzie-lite Rudy, can't get anyone to take their warnings seriously, they have to go it alone, finding their only ally in the neighborhood's scary German guy. That's pretty much the whole story, but it's more than enough to fill out the quick-moving 82 minutes.

Sure, the plot's a bit silly at points, driven by some insane coincidences, but the film has a definite sense of fun and action, and it never takes itself too seriously, balancing the menace of the monsters and the enthusiasm of the children, and even showing some self-awareness (as characters comment on things that don't make much sense.) On the other hand, it shows respect for the concepts at the film's core, including the mythology of the monsters, and even shows a bit of depth in spots. A somewhat subtle subplot about Sean's parents' marital trouble is rather unique for a film like this, while I'll never forget when I first realized what Scary German Guy's line about knowing monsters really meant. To this day it's amazing that this little tid-bit is so casually thrown into a movie like this.

While the movie looks great, thanks to a solid filmmaking effort from director Fred Dekker and company, it's the writing, from Dekker and Lethal Weapon scribe Shane Black, and the acting by a truly great cast of child actors that sells it, led by Gower, who is everything you'd want from the leader of the Monster Squad. For a perfect example of how good these kids are, check out Patrick (Robby Kiger) when things start to heat up. It's rare to see a child actor play panicked so well. Even Ashley Bank, who plays Sean's little sister Phoebe, is good, avoiding the cutesy crap that could have negatively affected the film (and intensely raising the stakes in the finale.) The writing actually picks up speed as the plot advances, and ends up delivering some of the most bad-ass one-liner moments in action comedy history, as each of the Squad's members gets their moment in the sun.

One of the things that struck me most in revisiting the film is how it would be impossible to make today, as it's way more adult than would be allowed in a movie ostensibly aimed at kids. The language used by the children and the behavior of the kids, including some naughtiness involving Patrick's teenage sister, would raise more than a few eyebrows. But because Fat Kid gets tortured at school, being called a "faggot," and Sean curses in front of his mom and takes it back, the movie has a sense of reality to it that helps counteract the dated clothing and brand logos that otherwise date the film. Though you'd have to think tqoce if you'd want a young kid experiencing the scares or language here, anybody can sit down with The Monster Squad and it will feel like a fresh, fun time. 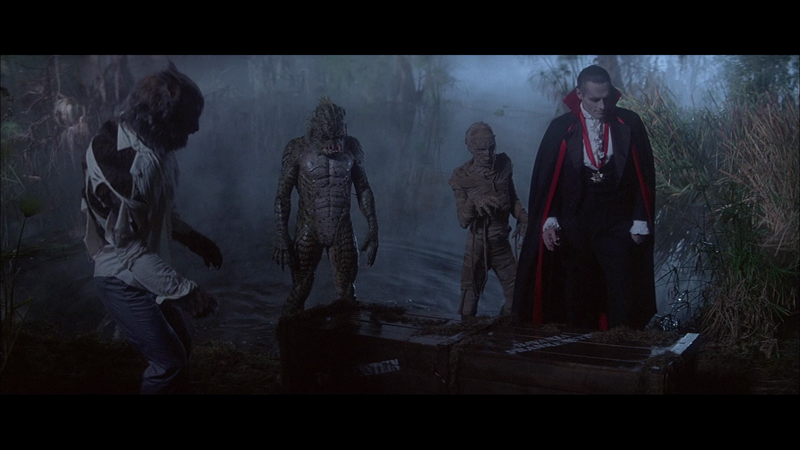 The Blu-Ray
The previous Lionsgate release was everything a fan could ask for, though the cover art failed to acknowledge the film's comedic elements. This time around, an illustrated cover (with old folded movie-poster creases) is far closer in tone, even if this image still divides fans online. (Personally, I think using the original logo was the way to go, as it sells the feel of the film perfectly.) All the packaging bells and whistles are gone now, as this one-disc release arrives in a standard BR keepcase. The disc sports a static menu with options to play the film and select scenes. The language options and subtitles available on the Lionsgate disc are gone.

The Quality
Though I never owned the previous Blu-Ray disc, I do have the DVD set, so there's the opportunity for some comparison (aided by research.) In looking at the two releases, the difference between the Olive Blu-Ray and Lionsgate's DVD is night-and-day, and not just in terms of the technical capabilities of the two formats (though that is quite a massive leap in and of itself.) The Olive image is much brighter and warmer overall, but it's also much softer, to the point where it seems like there's often a haze over the film (and not just during the oft-present fog.) The level of fine detail is disappointing for Blu-Ray, as is the amount of dirt and damage present. Looking back at the DVD, there's some, but there's either more here or the higher definition makes it more obvious. It's not overly distracting, but if that kind of thing bugs you, you'll notice it. On the plus side, colors are bright and vivid, and there are not noticeable issues with digital distractions.

Sitting down to watch this pressing, it felt like something was missing aurally. Hitting the info button on my remote confirmed it, as this disc sports only a DTS-HD Master Audio 2.0 (not the full 5.1 track on the Lionsgate set.) Admittedly, this is more authentic in terms of the original presentation, but it just feels empty for a film that has a lot going on (the climactic fight with the monsters comes off flat now.) The rest of the elements are clean and clear, with no distortion, as the dialogue enjoys quality separation in a center-balanced mix.

The Extras
Wolfman may have nards, but this disc doesn't have extras. If you were fortunate enough to have added Lionsgate's now-out-of-print Blu-ray (or even DVD) release to your collection, hold it close to your bosom, because after that set offered up a bunch of great extras, including a feature-length look behind-the-scenes, Olive Films offers you nada. 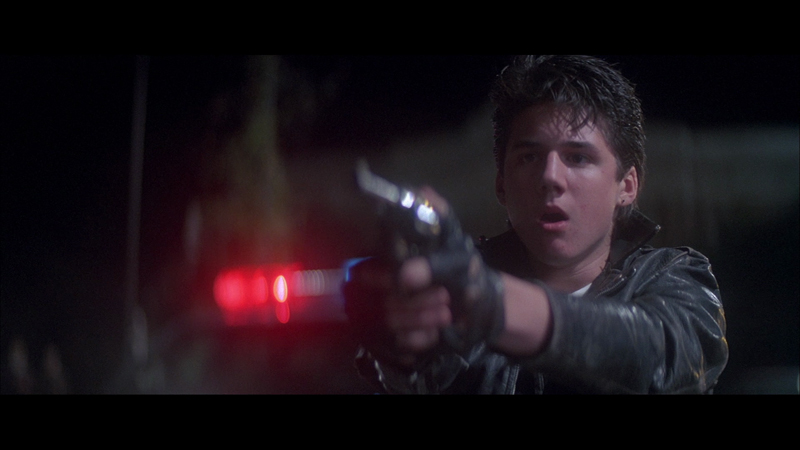 The Bottom Line
It's a big risk to mix action and comedy, because if you get the balance wrong, the element left in the minority feels out of place and ruins the rest. Mix in kids and horror, and you could possibly end up with a muddled mess. In Dekker and Black's hands though, this recipe paid off in a classic adventure film that may not have been a hit when first released, but, like many cult films, it's grown on people and been rediscovered on videotape and cable. Unfortunately, the best chance to relish the film came and went in 2009 with the out-of-print Lionsgate release, but it's nice to still have the option to pick up the film for those who missed out. The thing is, as of this writing, you can still pick up the previous Blu-Ray used for the same price or less, which makes it very hard to give this one anything more than a Rent It rating.